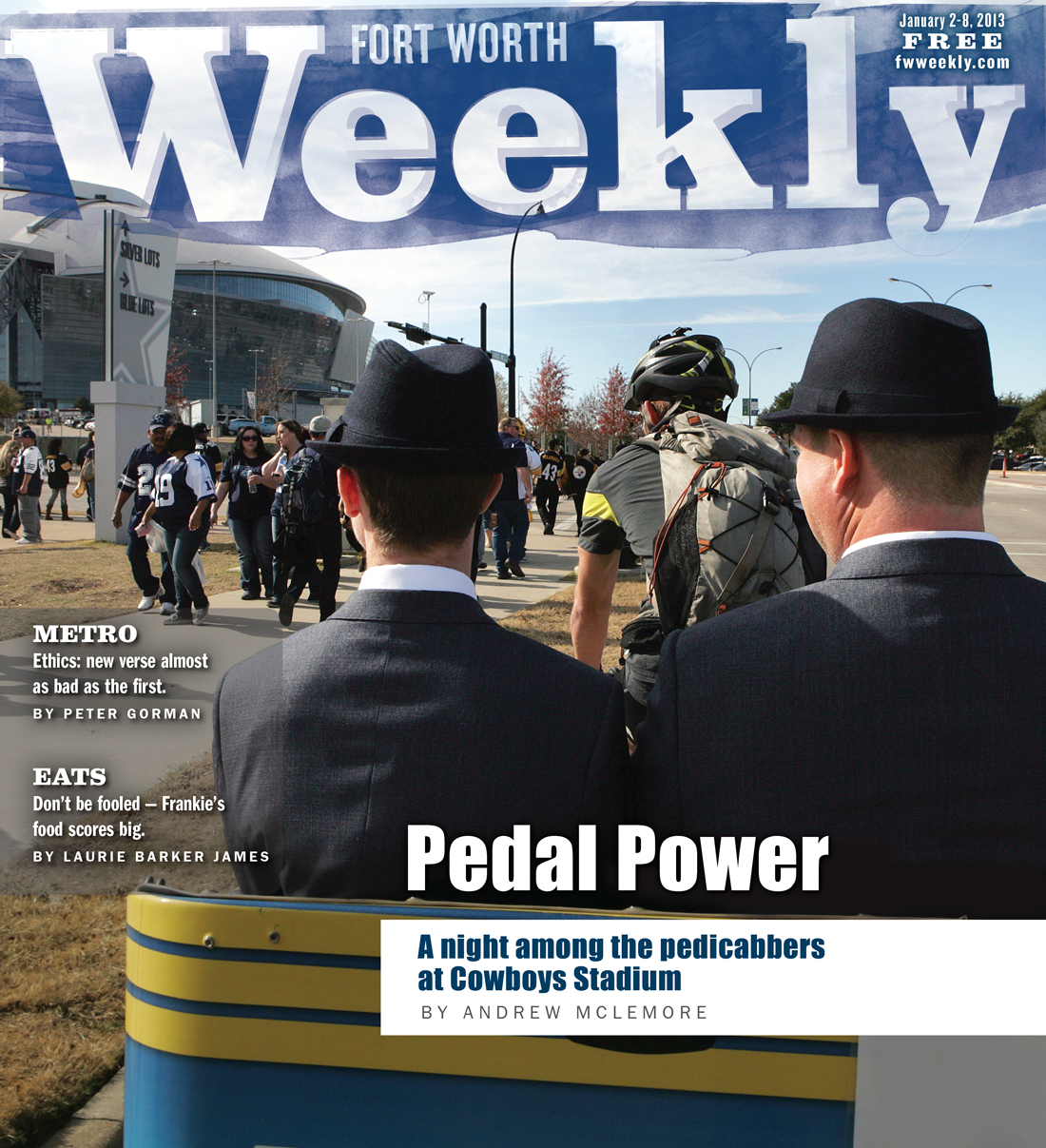 “Hey, you guys ready to roll?”

The middle-aged couple who are walking down the sidewalk on Legends Way turn around to match a face to the voice and see a frizzy-haired, blond twentysomething with a toothy smile. He’s in the right lane, lazily pedaling a three-wheeled contraption that at first glance looks like a bicycle sawed in half and welded to a cushioned bathtub on wheels.

The couple, looking confused, wave him on, clearly unsure what to make of this mechanical mutant and its cheerful operator. They were pedicab driver Matt Masthek’s first potential customers of the evening, but he’s certain to have many more chances as tens of thousands of football fans swarm to Arlington for a Sunday night game at Cowboys Stadium.

The stadium, along with Rangers Ballpark just two blocks away, has transformed a few square miles of one of the Metroplex’s most gas-powered suburbs into a pedestrian-heavy sports mecca. Developers have wasted no time filling the remaining space with bars, hotels, and restaurants, creating — almost overnight — a big-city atmosphere that has made driving suddenly impractical.

For sports fans, that means a lot of walking, and if you don’t like walking, there are always pedicabs.

The three-wheeled anachronisms started showing up in major cities across the country over the last 15 years, from San Diego and Austin to New York and New Orleans. They haven’t gained much traction in the highway-focused urban sprawl of the Metroplex, but when Cowboys Stadium opened, the pedicabs started showing up in droves. Several years and new regulations later, they are still somewhat of a novelty.

That’s OK with Masthek –– the novelty is part of the appeal, for both the passengers and cabbies like him.

Less than an hour earlier, Masthek, who manages Green Cabbies, one of a handful of pedicab businesses allowed to operate in Arlington, was helping his fellow bike-lovers unload their 21st-century rickshaws out of a few units at Uncle Bob’s Self Storage. The storage sheds are just across I-30 from the two to three square miles they’ll prowl for the next eight hours, past the end of the  7 p.m. Cowboys game.

The mood is jovial, even excited. Most of the pedicabbers live in Denton or Austin, and they trade stories about lunatic customers and overzealous cops.

When all the pedicabbers have left the self-storage business, Masthek finally rolls out onto Lamar Street and crosses I-30 on Legends Way, passing the Six Flags roller coasters that loom behind him and the SUVs waiting impatiently for him to pedal across the overpass.

After the first couple turns him down, Masthek, wearing a blue Deep Eddy Vodka t-shirt and matching blue-rimmed sunglasses, strikes out at least three more times as he passes other early-bird stadium-goers and barbecuing tailgaters.

A portly Hispanic father lounging in a parking lot yells at Masthek as he rolls by: “If I feed you, can I get a ride?”

“Yeah, I like that idea. I’m coming back for that one!” says Masthek, who sounds like he means it.

During those first few blocks, he continues chanting the solicitation that he will repeat with all passersby until he finally lands his first fare:

“Hey, you guys ready to roll?”

The first few groups wave him off, and Masthek thanks each one, projecting the affable personality that he maintains with all potential passengers. He approaches young families climbing out their SUVs and older couples leaving their hotels.

Often he cajoles people who’ve never taken a pedicab before and aren’t sure they’re interested in paying $20 to $40 for a five-minute ride to the stadium.

Masthek finishes the initial spiel with one family that has just left their parked car, but the father doesn’t immediately warm to the idea, so Masthek pours on a little sugar.

“It’s really fun,” he says, comically elongating the word and combining it with a goofy smile. The family is parked about a mile from the stadium.

Eventually they agree to the ride, and soon enough Masthek has them all laughing about who knows what, the two kids sitting on their parents’ laps and waving at each person they roll by.

A few minutes later, Masthek lets them out across the street from the stadium, the dad hands over some cash, and the family departs, seemingly in a better mood than when they got in.

Make no mistake: Pedicabbers are in the business of sales, not transportation.

This is complicated by the fact that their product isn’t very practical. Taxicabs, though hard to find, are cheaper and faster. So are the NEVs (essentially golf carts) that also patrol stadium-area side streets looking for passengers who have a disability or just don’t want to walk.

There’s also not a huge difference in time. Most parking lots are a 15- or 20-minute march from the stadium, which pedicabs can whittle down to about five minutes.

And if a family of three (or four or five) does decide to fork over 30 bucks for the short ride, they find themselves so stuffed and stacked into the pedicab’s small seat that a clown car would feel comfortable by comparison. Yet during the course of a single game, each pedicabber hopes to make between 20 and 30 fares and at least $300.

Despite the seeming absurdity of that kind of business model succeeding in a techno-addled, convenience-obsessed culture, passengers often tip their pedaling chauffeurs handsomely for a short ride.

If this sounds like it doesn’t make much sense, that is precisely the point.

“Pedicabbing isn’t even so much about the transportation as the experience you get while being transported,” said Phil Seidenberg, owner of Green Cabbies. “People are frequently intoxicated. We’re like party ambassadors.”

A handful of pedicabs wait in front of the Courtyard Hotel less than a mile from the stadium. Looking for customers, pedicabber Cedric Carr says, is “kinda like fishing. You never now what you’re going to get.”

While “fishing” for fares during one of the World Series games in Arlington last year, he picked up a woman who said the stadium was “too crowded” and gave Cedric a free ticket. So instead of working, he spent the rest of the night watching a World Series game.

“Man, that was crazy. The job comes with perks, you know what I’m saying?”

For most pedicabbers, though, it’s still a part-time job.

Carr also works at a travel insurance agency. Many of the Green Cabbies drivers are current or former University of North Texas students, including a singer in the jazz program. Another is trying to start a business installing rainwater harvesters for eco-friendly homeowners. Masthek was already waiting tables when he started pedicabbing. Six months later, he became a full-time manager with Green Cabbies.

Even as a part-time gig, the work requires intense physical endurance. Most of the drivers are lean and young, though there are some heftier, older outliers. Whether the loads are heavy or light, however, the key to making money is not strength, but endurance.

“There’s no actual correlation between body type and speed,” Masthek said. “When you first start doing it, most people won’t have the endurance to last the entire shift. They’ll have a lot of breaks in between.”

But maintaining your speed means money. Like taxi drivers, pedicabbers pay a nightly lease fee for their machines and pocket the rest of the income. So there’s an incentive both for amping up the speed and for hanging in there all night to squeeze in as many fares as possible. 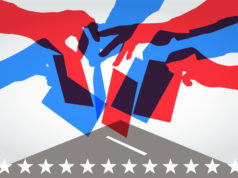 Voting Reform on the Horizon?