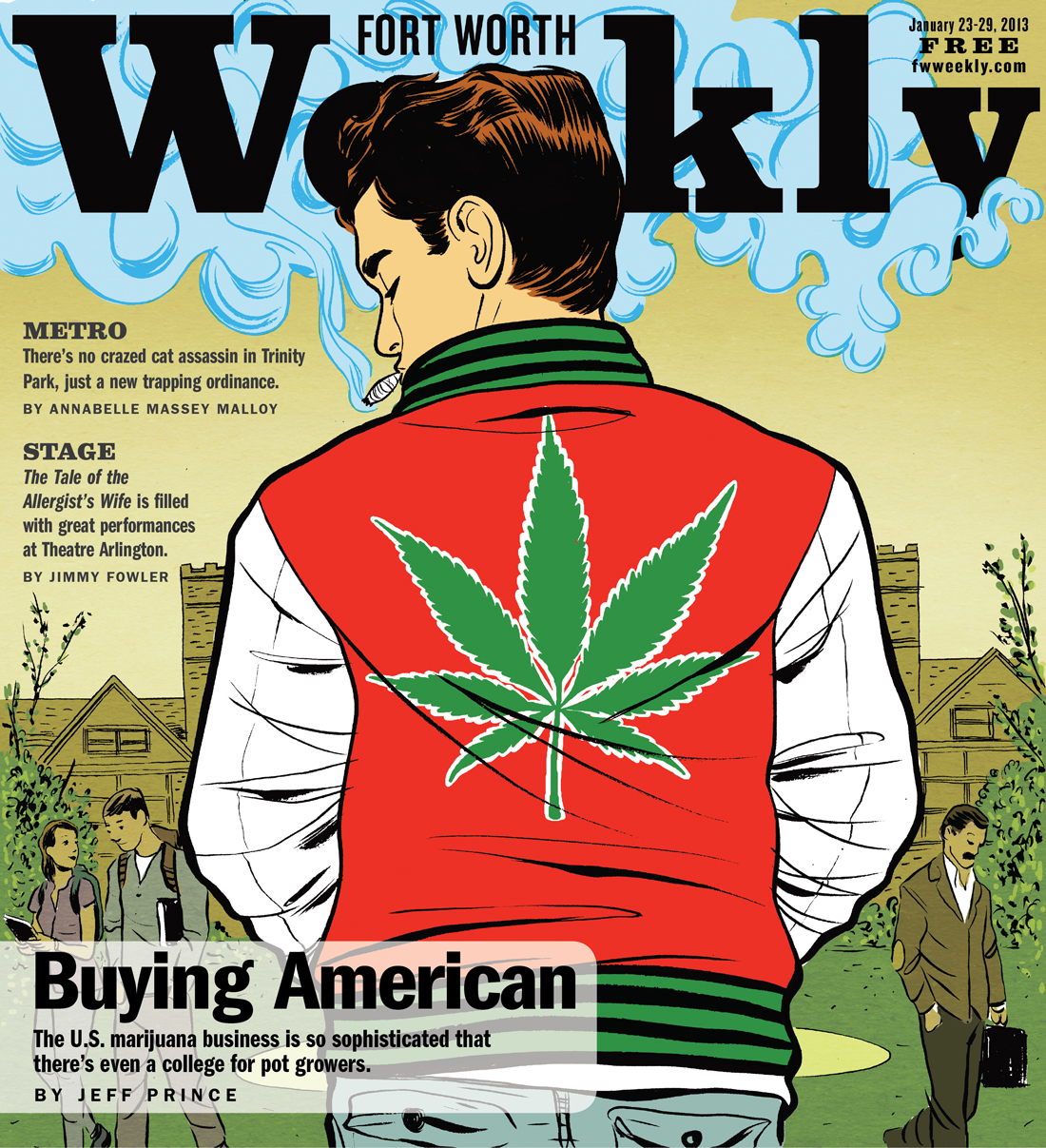 The bar is well stocked at J.R.’s house, nestled quietly in a well-to-do neighborhood not far from downtown Fort Worth. Booze is in short supply — three dusty wine bottles sit forlornly on a shelf. This bar’s bounty is green, red, and gold flowery buds sprinkled on trays and in baby-food-sized jars. It’s a cornucopia of cannabis, enough to make any connoisseur’s toes curl.

J.R. doesn’t touch it. He’s a trained budtender with a diploma earned at Oaksterdam University, the pot college in Oakland, Calif.  With a second home in California (and a medicinal marijuana permit in that state), J.R. buys nothing but the best pot, hydroponically grown with precise formulas of water, light, temperature, and nutrition for maximum effect. (Like all the pot aficionados interviewed for this story, he asked that his full name not be used.)

Domestically produced marijuana has been transformed into a major, sophisticated industry in this country, including in states like Texas, where pot is still illegal. People in the business are perfecting product development and growing techniques, and all over the country there are entrepreneurs like J.R., already clandestinely in business but waiting for the day when pot is legal –– a day they see rapidly approaching.

Five years ago, about 90 percent of the pot sold in North Texas could be categorized as Mexican weed. Now hydro has taken over about half of that market.

American pot farmers produced about 22 million pounds in 2006, worth about $35 billion, according to a report published that year in the Bulletin of Cannabis Reform. Texas didn’t rank among the top 10 states in outdoor marijuana production, but came in at No. 5 for indoor growing (115,000 pounds annually).

The same report listed pot as the country’s No. 1 cash crop. Corn and other crops are grown in greater volume, but, according to the Bulletin, none match weed’s production value — not corn ($23 billion), soybeans ($17 billion), or hay ($12 billion).

Of course, accurately determining how much pot is grown and smoked is kind of like trying to fence in a butterfly.

“It’s just a wild-ass guess,” said Terry Nelson, who spent three decades in law enforcement, including stints with the U.S. Border Patrol, U.S. Customs Service, and the Department of Homeland Security. Now retired, he’s a member of Law Enforcement Against Prohibition (LEAP), a group of criminal justice professionals who disagree with current drug policies. They say legalization would cripple cartels and street dealers.

“If there is one [grower’s crop] you are stumbling on, there are probably a thousand that you’re not,” he said. “Cops always use the 10 percent rule: You catch 10 percent of people doing something wrong and know about 10 percent of what’s going on.”

Mexican weed still dominates the Texas market, he said, but hydro is making a big impact.

“We need to legalize these drugs so we can regulate and control them,” he said. “That will reduce about 80 percent of your crime and violence related to the drug trade.”

J.R.’s stuff comes from legal dispensaries such as Harborside Health Center. He totes the jars back to Texas by car. Or he’ll buy from North Texas suppliers who get their weed from California, Washington, Colorado, and other marijuana-friendly states or from Texas growers who’ve taken advantage of falling prices in lighting and moisture systems to set up their own customized grow rooms.

Read up on growing techniques, buy equipment online or at a local hydroponics equipment store (several advertise on the back page of this newspaper), order some killer seeds, and you too can grow mind-blowing weed with a little practice.

That’s fine if you suffer from migraine headaches, AIDS, cancer, glaucoma, arthritis, insomnia, or another chronic malady whose symptoms can be relieved with medicinal-grade hydro.

Some smokers, though, don’t want visions, panic attacks, or zombie trances. They prefer the gentler weed grown outdoors in big fields, the kind that sold for many years at $100 an ounce or less –– the pot typically brought in from Mexico. The price remained consistent for about 25 years, and it was easy to track down.

While Mexican farmers and distributors were going through the motions decade after decade, West Coast hippies were developing new ways to grow and sell cannabis. In a relative blink, the scene transformed.

“The guy I usually buy from buys from a guy in Fort Worth, and he has been having a hell of a time finding anything,” said a Dallas smoker named Tommy who has bought cheap Mexican weed for two decades. “In the past three or four years, he’s been having trouble finding it.”

A student who’s attended two Texas colleges during the past four years said, “The people who sell it are kind of shady and live in the bad parts of town. The quality is low, and you’ll probably get it delivered in an old Burger King wrapper that’s still got mustard stains on it.”

That kind of Mexican weed was wetted down, compressed into bricks, lugged across the border, broken up again, and peddled to American consumers at low prices. Dirt weed goes by many street names, although these days it’s jokingly referred to as “Pedro” (a rude twist on “hydro”).

“The stuff that comes out of Mexico is … going to your younger or more socio-economically deprived people,” said Fort Worth attorney David Sloane, who handles drug cases and works closely with the Dallas/Fort Worth chapter of the National Organization for the Reform of Marijuana Laws (NORML).

Some tokers won’t buy Mexican weed because they don’t want to help support the murderous cartels that hold sway in many parts of Mexico and terrorize inhabitants along the border with Texas. “Buy American” has become the rallying cry of the conscientious pot objectors.

What’s plentiful — and more politically correct — is domestically grown, knock-your-socks-off hydro at $300 or $400 an ounce.

It’s an evolution that can frustrate college students and working stiffs living on tight budgets, soccer moms who want a mild relaxant that doesn’t leave them addled when little Jimmy comes home from school, and old hippies who like to catch a buzz without feeling like they’re suffering a coronary.

Up until a few years ago, both types of pot were available. Some people blended them to create customized potencies to fit their particular DNAs and budgets.

Now it’s pretty much hydro or no go.

The scene continues to evolve, with new strains of hydro making their way into North Texas that are cheaper and milder, but still a notch or two above Mexican weed.

Future North Texans may look back at the second decade of the 21st century as the Golden Age of weed, a time when entrepreneurs could get in on the ground floor, potheads could find high-quality bags of weed at decent prices, and John Law was starting to relax his firm grip.