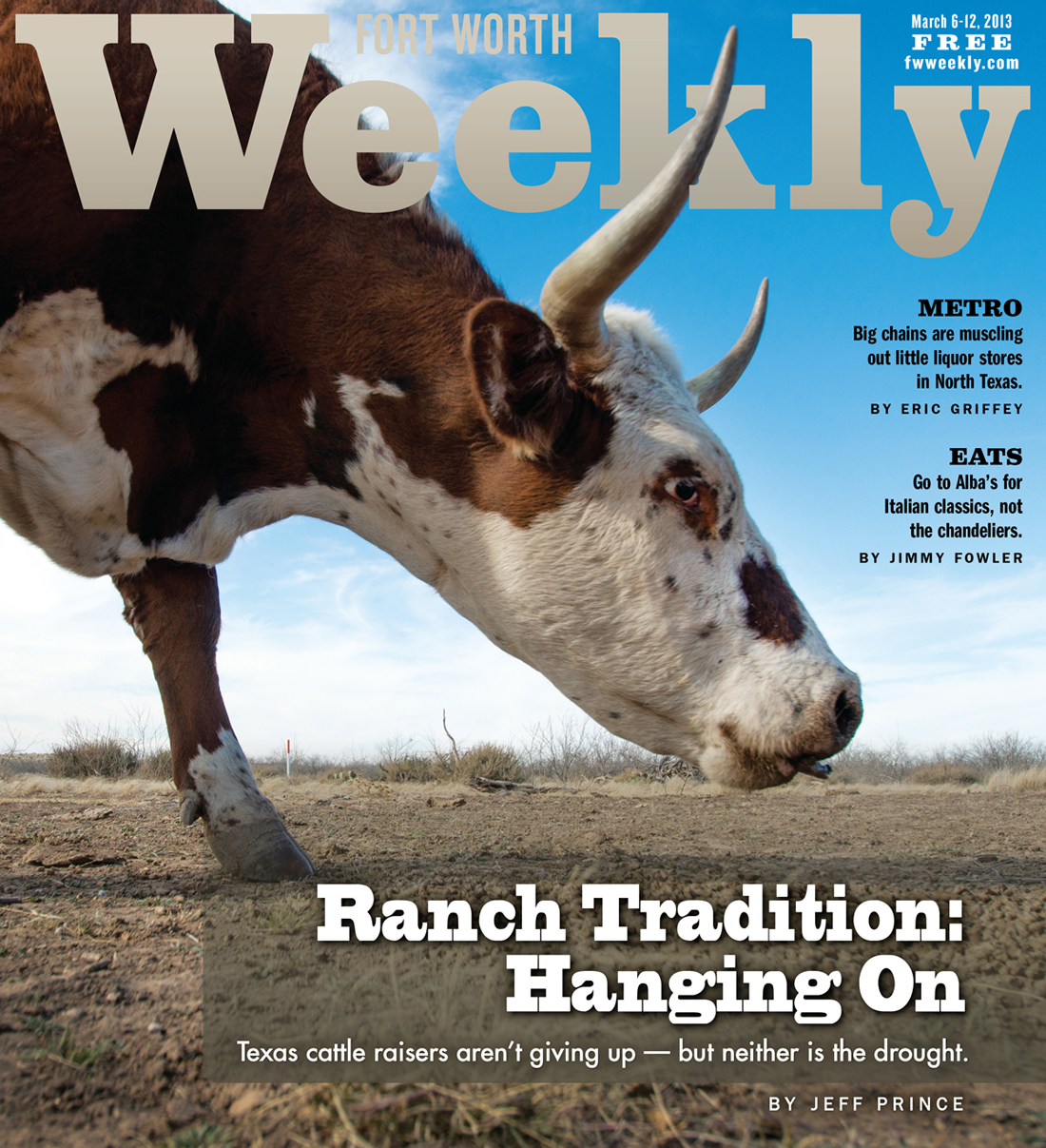 The tools of a rancher’s trade are scattered around the office in Saginaw. Leather chaps, spurs, dusters, bridles, and sweat-stained cowboy hats hang on hooks and racks. They’re utilitarian, not décor. Still, they give the office a rustic appeal. Old black-and-white photos depict men roping calves and sitting astride horses. The room’s centerpiece is a big oak desk cluttered with papers and knickknacks but clearly marked by a wooden plaque inscribed “John M. (Pete) Bonds.”

Bonds loads Copenhagen in his bot-tom lip, pets one of several dogs roaming around, and takes a break from his most important tool of all — the computer.

Missy, one of his three daughters, shares office space with her dad and helps manage the ranch. They study crop reports, weather patterns, spreadsheets, and feed and cattle prices from around the world. Thinking ahead is crucial in ranching, particularly when the industry is reeling from a myriad of problems due mostly to one sad fact — Texas is mired in a record-setting drought.

“I don’t know if we’ve been smart or lucky,” Bonds said, trying to explain how his ranch has grown from a 5,000-acre spread north of Fort Worth to one of the country’s largest cattle operations, with land and stock scattered across a dozen states and Canada.

Bonds is a burly, raspy-voiced cattleman who wears scuffed boots and denim clothes and lives in the same house where he was born more than 60 years ago. Cuss words and country expressions sprinkle his speech, his hair is disheveled, and he’d look more at home on a horse or a tractor than hunched over a computer with “Argentina Crop Report” glowing onscreen. But the fact that Bonds is surfing the ’net and can talk with precise insight about every facet of the cattle industry proves he’s smarter than he is lucky.

Even so, he’s not immune to the mounting pressures that have put Texas ranchers in a vise in recent years.

How many cows is that?

“That’s kind of like asking how much money you have in the bank,” Bonds said. (Later he mentioned he’s culled out several thousand head from his ranch in Saginaw.)

Bonds is like other Texas ranchers facing assorted challenges — diminished herds, a lingering recession, changes in American eating habits that are decreasing demand for beef, and spiraling costs for fuel, fertilizer, and feed.

But the biggest problem is lack of rain. Texas hasn’t endured a drought like this since the 1950s. No rain means no grass, and without grass, ranchers have to sell off cattle.

“We’re now at the lowest point since 1952 in terms of cattle herds in the United States,” said Eldon White, CEO of the Texas and Southwestern Cattle Raisers Association.

Texas still produces more cattle than any other state, but the breeding herds here have been reduced by about 20 percent — or about a million head — since 2011. Rebuilding herds and re-establishing good grass takes several years after a drought, and nobody is certain when the current dry spell will end — or if.

Still, ranchers are hanging on, for the most part. Their business is cyclical by nature, a never-ending ebb and flow of good times and bad. And Texas still boasts 4 million beef cows, or 13 percent of the nation’s beef cattle.

“If you want to be in the cattle industry, you have to be a born optimist,” said Johnson County Cattle Auction owner Bob Cantrell.

Industry problems notwithstanding, there is an upside. Meat prices are soaring, exports are stronger than ever, and millions of Americans still consider a big juicy steak to be the pinnacle of good eating.

That bodes well for the future of cattle ranching … if the rains ever return.

“We’ve hung in there so long because we don’t know what else to do,” Cantrell said. “It’s getting harder to make any money at it.”

Ranchers like to say that Texas is in perpetual drought broken only by occasional floods. Even the worst drought, they figure, will break eventually.

“Five years from now we’re going to be talking about an expanding cattle herd in the United States and increased beef production because I assume the drought will be over,” said David Anderson, a Texas A&M University livestock economist.

But many hydrologists and climate scientists no longer think that assumption is a safe one. Some believe that the current arid conditions are going to become the new normal for much of Texas and the Southwest, as global warming advances. In that case, the wait for rain and grass and, therefore, cattle herds to come back to past levels could be a long one indeed.

John Nielsen-Gammon, the state climatologist, said much of Texas is in a long-term drought that could last another 15 or 20 years with only intermittent wet spells.

Others, such as David Foster of the nonprofit environmental group Clean Water Action Texas, believe arid conditions are here for the long haul.

“We’ve turned the corner and are facing a drier and warmer future,” he said.

Few states have been harder hit by drought than Texas. At the least, experts predict that the drought here will continue through this year.