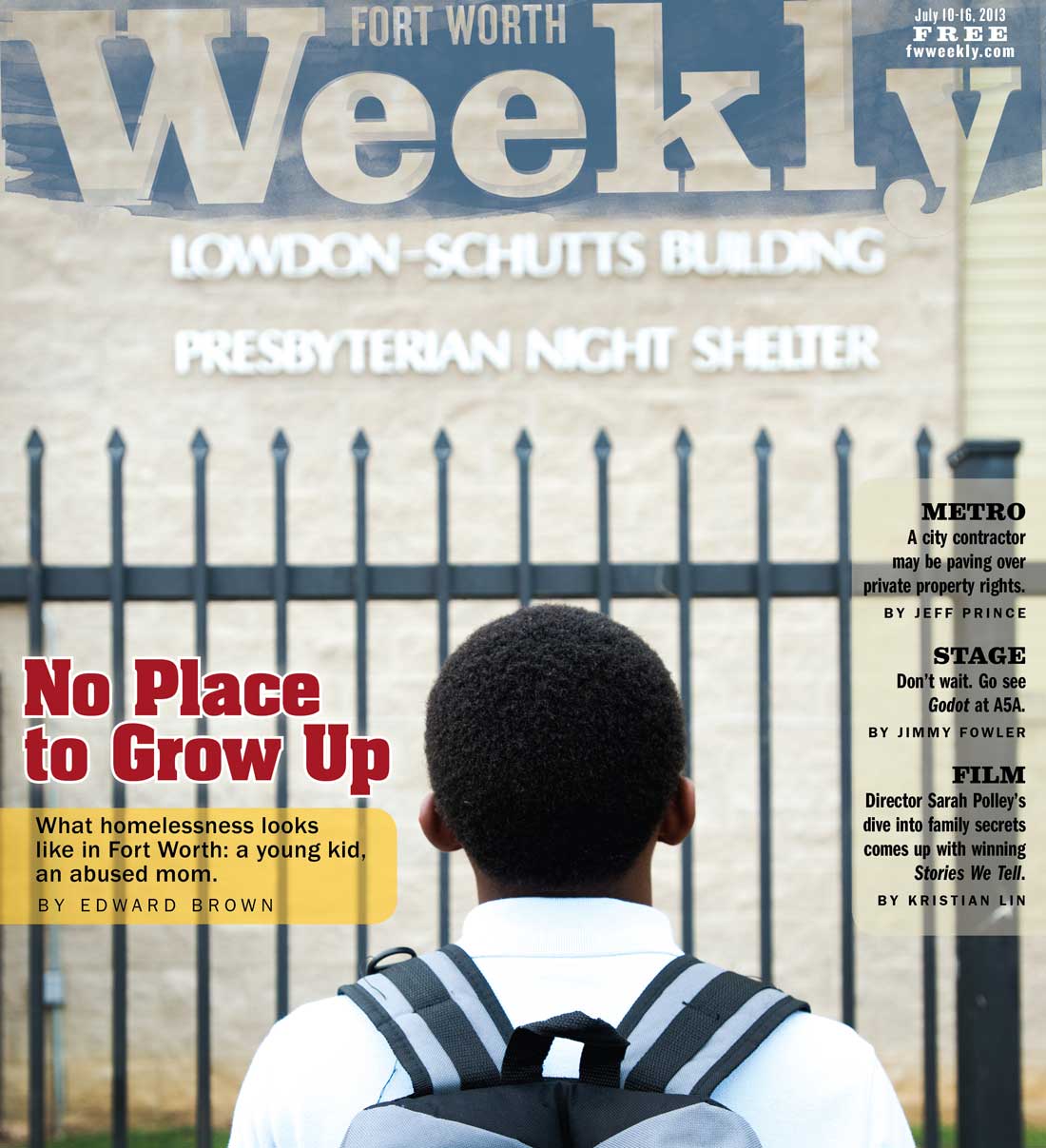 As the school bus pulls up at its regular stop on East Lancaster Avenue, not just a handful but a whole crowd of elementary students pile in. When the bus pulls away,  it reveals a sign that had been hidden by the kids. It says “Presbyterian Night Shelter.”

These kids are the face of Fort Worth’s newest homeless population, and they are giving city officials and community leaders a renewed sense of urgency in the fight against homelessness.

In 2008, long after many major cities enacted 10-year plans to combat the problem, Fort Worth joined in with Directions Home, a program aimed at “ending chronic homelessness in Fort Worth.” Halfway through the 10-year plan, there have been some victories: About 1,200 formerly homeless people have been moved into stable housing and provided with the kinds of job training and other support to give them a good chance of staying there.

While that was happening, however, a very different trend was being noticed — the growing number of homeless mothers and children.

Over the past two years, according to the Tarrant County Homeless Coalition, the number of homeless children has risen by 52 percent. They now make up almost a third of the homeless population in Tarrant County. And they are arriving at shelters for battered women and the homeless at younger and younger ages. The coalition is a government agency that coordinates resources and develops strategies to end homelessness. 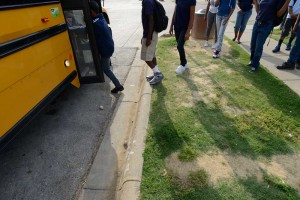 The youngest children — including newborns — are arriving with their mothers, who represent the other fast-growing segment of homelessness in North Texas. Shelter and city officials said most of the increase is due to record levels of domestic abuse and to recession-related economics.

“Seventy percent of the mothers [we see] are domestic violence survivors,” said Macie Hill, director of development for the Presbyterian Night Shelter, Fort Worth’s largest provider of both traditional shelter and supportive housing. Other sources put the percentage as high as 92 percent.

But not all homeless children go through that experience with a parent. And many of them, including hundreds of runaways, don’t make it into the shelters. This population of “couch hoppers” blends into the Fort Worth student population by day. By night they sleep on a friend’s couch or in parks or in their cars.

A team of workers from ACH Child and Family Services (formerly the All Church Home for Children) spends most of its time combing the streets, especially in the environs of East Lancaster, where most of the city’s shelters are located. They also talk to school officials, all in an effort to find these kids and get services to them.

The array of organizations involved in helping these women and children demonstrates both the community’s recognition of the situation and its seriousness. New groups such as Care Closet, a nonprofit clothing source for homeless kids, have sprung up, and established groups have added new services.

The downtown YWCA, for instance, added a child and family advocate to its staff to help meet the needs of the parents as well as children.

“Research shows that the most effective way to increase positive academic results for children is to increase the income of their parents,” said YWCA director Carol Klocek. “So now we’re doing both.”

But agencies that help the homeless are being hit from both sides — with a greater demand for services but also, thanks to government budget cuts, the prospect of serious reductions in their funding. Particularly worrisome for many agencies is the federal sequester, which mandates funding cuts at almost every level of government.

At the Tarrant County Homeless Coalition, executive director Cindy Crain is already preparing for the impact. She expects the coalition to lose as much as 8 percent of its funds.

“We will have to make hard decisions,” she said.

Several weeks ago, SafeHaven, Tarrant County’s domestic violence agency, registered a first: a baby born in one of its two emergency shelters for battered women.

The birth is part of a broader and worrying trend that shelter workers are seeing.

CEO Mary Lee Hafley said SafeHaven has seen an alarming increase in homeless women with children asking for help. Not only are more and more women in need of shelter and other services, but more of them are arriving with children, particularly with infants.

“It’s not unusual for us to have multiple families with newborns [and] 6- month-olds,” she said. “Some [mothers] are in the shelter, leave to give birth, and then return to the shelter.

The recession has been driving up occupancy rates at SafeHaven and other shelters for some time now. “Across the state and nation, shelters are running out of room, and calls to the National Domestic Violence Hotline have increased significantly since the recession started in 2008,” said Angela Hale, spokesperson for the Texas Council on Family Violence and the National Domestic Violence Hotline. Shelter directors and police can pinpoint some of the factors causing the influx. Domestic violence rates increase when times get hard.

Women are also staying longer at SafeHaven than in the past, as the recession complicates the task of helping them find jobs and long-term housing.

“The term ‘emergency’ is being redefined,” Hafley said. “Emergency used to mean a few days up to four weeks. With more obstacles to remove to achieve independent living, clients stay six weeks or more. Last year, our average length of stay was 22 days, more than double the previous year.”

Longer stays and full shelters mean that the numbers of women and their children served haven’t increased, even though demand is up.

“We were full three out of every four days,” Hafley said. “Fewer turnovers normally means a lower number served per year.”

According to Lena Zettler, director of psychology at Cook Children’s Health Care System, the average age of children with single homeless mothers is under six years. And since children often witness domestic abuse, a staggering 83 percent of homeless children have been exposed to violence before entering a shelter.

“We receive more than 200 calls a month from women seeking safety and shelter,” said Don Shisler, president and chief executive of Union Gospel. “The women urgently need help and hope, and as a result, we must make more room.”

The shelters on East Lancaster work hard not to overlap their services any more than necessary. The Salvation Army runs the Mabee Social Services Center, which provides services similar to Presbyterian and Union Gospel, but with the addition of a unique program called First Choice.

With a capacity of only four families, the Salvation Army refers women it can’t help to the other Fort Worth shelters or to the organization’s own Arlington branch.

“We have seen an increase in the number of families with children coming and calling,” said operations director Beckie Wach. “There has been an increase in single-father families as well as two-parent families. I have also had a family composed of a pregnant lady who is raising her daughter and 15-year-old sister because her parents were illegal and had to return to their country.”

At the YWCA, a 2009 federal law called the HEARTH Act (Homeless Emergency Assistance and Rapid Transition to Housing) has helped the agency extend its services to more women with children. “Prior to the HEARTH act, only those individuals who were not accompanied by children were eligible for long-term supportive housing,” explained Klocek. “The HEARTH act allowed the YWCA to expand housing services to women and children who have the greatest need.” Supportive housing refers to the combination of housing subsidies and services that help people stabilize their living situations.

Rosie Mackey never thought she’d be in a homeless shelter. At 48, she is raising four grandchildren ages five to 13.

She lost her job and then, eventually, her car, because she couldn’t afford to keep it. “Once I lost my transportation, I couldn’t continue looking for work,” she said.

After living a few weeks with her grandkids in a friend’s one-bedroom apartment, Mackey made the difficult decision to move the family into Presbyterian last December.

She refers to the grandchildren as her kids; she is in the process of adopting them. Their mother, Rosie’s daughter, has been in and out of shelters on East Lancaster herself.

Families live in close quarters at Presbyterian, and even small incidents can quickly escalate into more serious altercations. Mackey doesn’t allow her children to play games such as tag, in an effort to avoid fights.

“Other people’s children, they like to play tag, and when you hit someone too hard, then the other kid wants to fight,” Mackey said. “My kids don’t play tag.”

The pressures of shelter life reach the adults as well. If kids fight, that “leads the mothers into it,” Mackey said. “We’ve all got different stories. You got different personalities, a lot of different attitudes, and some jealousy, some selfishness, some envy.”

She does her bit for keeping the peace by encouraging her kids to spend their time reading books, watching television, or participating in free summer camps.

While her grandkids are off at summer camp, Mackey is working weekend shifts at a local nursing home. Her eagerness to work with the system to get back on her feet is evident.

“You have to think,” she said. “You’re in this situation. You’re not going to be here long. You do what you have to do to get out.”