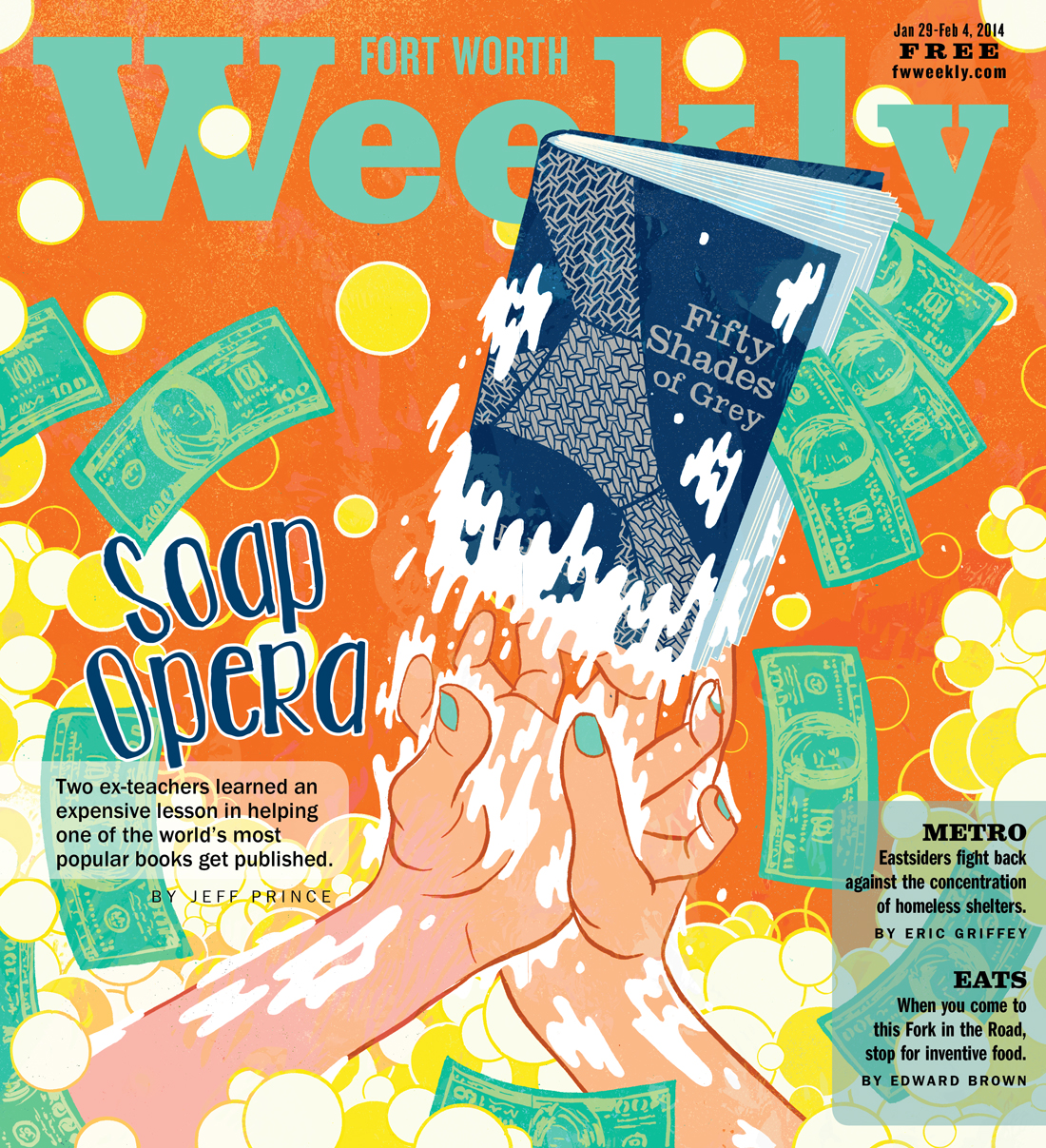 Fifty Shades of Grey became 50 shades of blush for an Arlington woman who made a bad business deal. Jenny Pedroza helped introduce the masses to one of the hottest sellers in the history of books. Now she’s embarrassed that she wound up with almost none of the money after being “outmaneuvered” by a former business partner.

“You live and you learn,” Pedroza said. “Don’t just take a handshake.”

Pedroza is now making citrus-scented and other kinds of soap with her longtime friend Christa Beebe, who also worked for the small publishing company that introduced online readers to E L James’ steamy mom-porn before the rest of the world saw it. The company sold the publishing rights to Random House for a reported $1 million-plus.

Pedroza is still smarting from that business fiasco, but not much. She’s remarkably upbeat and positive, despite missing out on the Fifty Shades gold mine. Pedroza, Waxahachie resident Jennifer McGuire, and Australians Amanda Hayward and Lea Dimov founded The Writer’s Coffee Shop in 2009 to write and share online fan fiction. Fanfic, as it’s sometimes called, refers to e-books written by fans and based on the plots and characters of previously published books. Fifty Shades was spawned from Twilight, the book series so popular with teenage girls and a lot of other folks.

The Texas women and the Aussies met online in the 2000s. Few people were making money in fanfic until The Writer’s Coffee Shop published Fifty Shades online in 2010 and watched it become a global phenomenon. Hayward handled the company’s business registration and paperwork from Australia. Up to that point, the profits from the company had been small change, so the documents didn’t seem like a big deal.

When Random House showed up the following year asking about buying the rights, Hayward drew up paperwork showing herself as sole proprietor, telling the others it was “for tax purposes,” Pedroza recalled. (Neither Hayward, Dimov, nor McGuire responded to interview request for this article.)

In 2012 Writer’s Coffee Shop sold the rights to Random House for seven figures and a percentage of royalties on future e-book sales.

“Amanda came to us and told us we had to sign contracts and incorporate for tax reasons,” Pedroza said. “I never got a lawyer. I just trusted.”

In the restructuring, Pedroza became chief marketing officer but said the amount of money she received from sale of the publishing rights was unfairly small, and she  hasn’t seen any of the e-book royalty money. In November she was fired by Hayward. She’s talked to a lawyer but hasn’t filed a lawsuit. Beebe was fired as well.

Search online for “Writer’s Coffee Shop” and “Fifty Shades” and you’ll find articles with headlines such as “The Aussie Housewife Who Established a Publishing Empire” and “Meet Amanda Hayward — the face of the e-book publishing phenomenon,” but the stories don’t mention Pedroza. ABC Sydney profiled Hayward in a March 2012 article with the headline “Fifty Shades of a Million Dollars” and referred briefly to a “U.S. partner” but didn’t mention anyone by name. As far as most people know, Hayward was the single driving force behind the tiny publishing company.

All of which has little impact on Pedroza, other than making her feel silly that she didn’t hire a lawyer to protect her interests when the business was being established and, especially, after it was restructured during the Fifty Shades hoopla. Nowadays she’s excited about her new business venture, The Soap Barista. She and Beebe joined forces in that company and washed their hands of what they still see as a dirty deal.

“This is the beginning of our soapy empire,” Pedroza said, spreading her arms wide, indicating a shelving unit stacked with freshly cut bars of soap and stuck rather unceremoniously in a hallway off the kitchen of Beebe’s south Arlington home. The rack of products doesn’t exactly scream, “These women are captains of industry!” But then neither did the online fan fiction site in its early days.

Beebe welcomed Fort Worth Weekly into that sudsy empire for a tour, which didn’t take long. Her contemporary brick house blends in with those of her neighbors in this neat middle-class enclave just short of the Mansfield city line. She and Pedroza mix, heat, and stir the soap ingredients in a big pot in Beebe’s kitchen. Pedroza is blonde and outgoing. Beebe is younger and perhaps a bit quieter, but just as quick to laugh as her friend.

(A third partner, Kera Eason, helped establish the company but she still works full time as a teacher and isn’t as involved in the day-to-day business of producing and selling soap.)

Beebe and Pedroza pour the mix into a box lined with wax paper and chill it in a refrigerator for 24 hours. After it hardens, they cut the block into smaller bars and place them on the aforementioned shelf to cure for four to six weeks. They say their soap is free of detergents and preservatives, lathers more than most, lasts a long time, and smells great. Varieties include tangerine, peppermint, almond cookie, champagne, beer(!), and even a fragrance-free variety that’s marketed to hunters.

Afterward, they hand-wrap the bars (the ones for hunters are wrapped in camouflage) and sell them for $5.99 each at Canton Trade Days and other trade shows. They’re not earning nearly as much as they were at the publishing company or teaching in public school. But they’ve seen their soap sales improve over the past year, and they hope to see continued increases in orders in 2014. (And both have supportive significant others with jobs.)

For now, they don’t make many batches of soap at one time — their customer base is relatively small, and the soap bars have a limited shelf life.

“That’s the downside of going the natural route — no preservatives,” Beebe said.

The good side of being organic is that the soap contains no chemicals. Beebe’s young daughter, Maya, provided the motivation for creating the soap company. About a year ago she began showing signs of the chronic skin condition eczema, marked by dry, itchy rashes. Beebe took her to a doctor who prescribed a hydrocortisone lotion that contained alcohol, preservatives, and various ingredients with strange names.

“They wanted me to put chemicals on it to fix it,” she said. “It seemed counterintuitive.”

Beebe is big on organic foods, so she looked for another way to treat her child’s condition. Online she read how some eczema sufferers had found relief using natural soaps. But the soap wasn’t cheap. Beebe, who describes herself as an “I can do it better” kind of person, set out to make her own. This occurred just before the legal wrangling began with the Writer’s Coffee Shop.

“We had experimented a little bit with making soap before we knew our jobs were in jeopardy,” Beebe said. “Once we found out we were no longer employed, we started trying to figure out what we were going to do with ourselves. We had this soap lying around that everybody loved, and we thought, ‘Let’s see what we can make happen here.’ ”

The two had worked side by side for 10 years as third-grade team teachers in the Mansfield school district before leaving in 2011 to focus on the rapidly growing publishing business, including the Fifty Shades explosion.

“It was a surreal time,” Pedroza said, recalling how she handled calls from The New York Times, Good Morning America, Ellen DeGeneres, the Today show, and other news media trying to track down the hottest author around. The reporters and producers didn’t know that the marketing executive handling calls for the year’s fastest-selling book was also wiping third-graders’ noses and teaching them basic math and spelling.