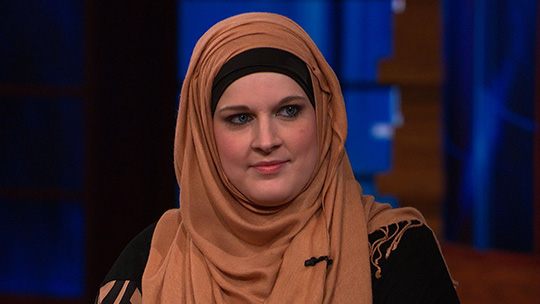 The Fort Worth nerdcore rap artist formerly known as MC Router was on Dr. Phil today with her mother, who’s worried that her daughter, a recent Islam convert, will become a terrorist. In 2007, we profiled Router (“And Now, Wearing the Geeksta Crown …”), born Kristen Ritchie and now known as Abby, and discussed her immense talent and her novelty as a woman in a predominantly male-centric artform. The 27-year-old Arlington Heights grad converted to Islam a few years ago, not long after she guested on Rivercrest Yacht Club’s new, long-in-the-making album Aquanaughty and, evidently, while still searching for an identity.

“She got into being Goth, and then she went into the military,” Abby’s mother Darlene told the good doctor. “She started swing dancing. Then she became a rapper. Then she got interested in Dutch people. She learned Dutch and changed her name to Krisje.”

Abby’s plan now is to move to Saudi Arabia after finishing school.

Dr. Phil asked the former rapper for her thoughts about America. “I appreciate the freedoms here and stuff, but it’s not my cup of tea,” she said. “I like being around old culture and traditions, and I think America is just kind of a big melting pot, and there’s not a whole lot of tradition here. … I’m just bored here, I guess. I mean, who knows? I could move somewhere and then miss America.”