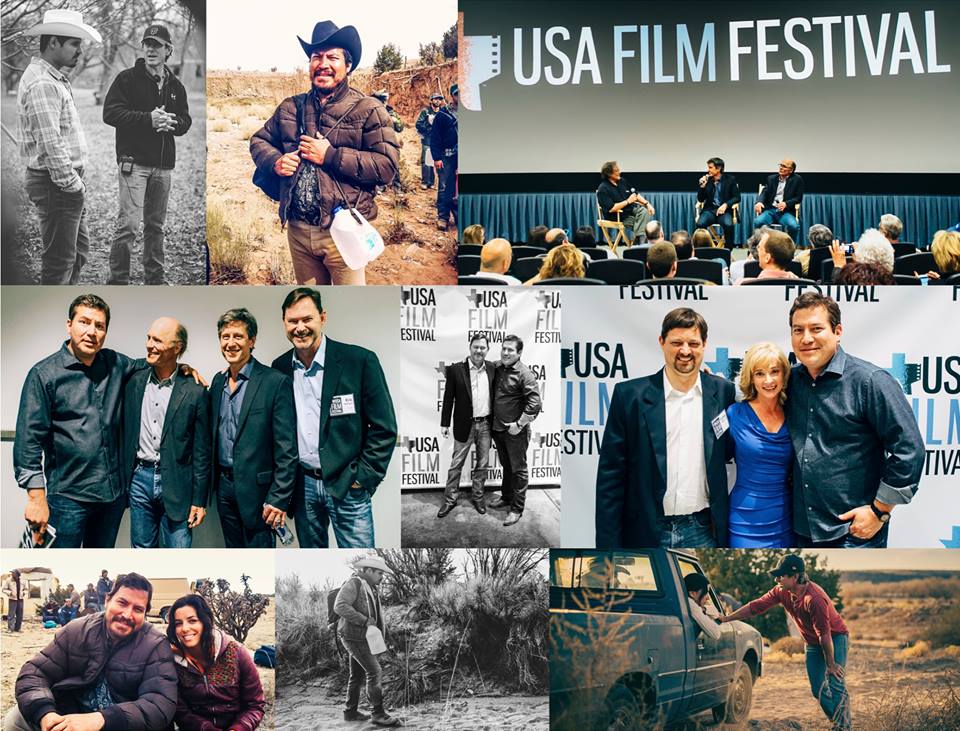 Last Sunday’s screening of Frontera at the 2014 USA Film Festival in Dallas was a candid glimpse into a great film and the world of acting. The room at the Angelika Film Center was packed with Hollywood heavyweights: actors, directors, distribution reps, and lots of folks I probably should have known.

A few minutes before the event started, Frontera’s  star, Ed Harris, quietly joined his wife, Amy Madigan, near the front row alongside fellow cast members Marilyn Rising and Julio Cedillo. The screening was billed as a tribute to Harris, and in true Hollywood fashion the show started with a montage of his career. Many of the clips highlighted the roles Harris is most celebrated for (The Abyss, Pollock, The Right Stuff), but there was plenty of obscure ones as well. After the short homage, Harris, who had been sitting with one cowboy boot cocked casually over the railing, walked up front and gave a short message. His response to the montage was grateful and a bit cryptic.

“I wasn’t sure what to expect, but, Jesus,” he said with a laugh.

Harris thanked everyone for the honor and mentioned his family’s many roots in Texas.

The lights dimmed, and the film began. Set along the Arizona-Mexico border, Frontera follows the journey of a Mexican immigrant (Michael Pena) who crosses the border illegally to find better work. His plan is cut short when he is blamed for the accidental death of a retired sheriff’s wife (Madigan). As the sheriff (Harris) tries to piece together who is actually at fault, Pena’s character’s wife (Eva Longoria) crosses the border to find her imprisoned husband, enlisting the help of a smuggler turned kidnapper (Julio Cedillo) to get there.

Frontera is itself a kind of montage, capturing the complex interactions among peoples on both sides of the U.S./Mexico border. The central narrative of Harris’ search for his wife’s killer holds the movie together well, but the film is also filled with countless scenes that examine the darker side of human trafficking and law enforcement policy. While the movie is a largely unbiased portrayal of the immigration issue, viewers are compelled to see illegal immigrants as far more than the two-dimensional sound bites they’re often relegated to in the news.

While the closing credits rolled, Frontera director Michael Berry, Harris, and actor/director Charles Haid, microphones in hand, waited to take their seats up front for a post-show conversation. Someone mistakenly stopped the soundtrack while the credits were still rolling, prompting Harris and Berry to provide some impromptu whistling of the film’s theme song. The lighthearted gesture was met with laughs from the audience, and the three took their director chairs up front.

Haid played the role of moderator, but his first question about the film was interrupted by Berry, who said he needed to introduce some folks first. He then pointed to my friend and native Fort Worthian Cedillo, describing the film’s villain as the “scariest and nicest person on set.” After getting up to wave to everyone, Berry introduced Rising and Madigan before continuing with a brief history of the film’s production.

The Q&A session turned out to be even more entertaining than I imagined, even if the questions were generic. One over-excited fan asked what Harris’ favorite role was after spending a full minute explaining why hers was Pollock. He paused and then answered, “Pollock.”

For some reason, people think the life of an actor is full of regrets, but when a middle-aged gentleman asked Harris what his biggest missed opportunity was the actor dropped a bomb no one was expecting — it was Stanley Kubrick’s Full Metal Jacket.

As Harris recalled, Kubrick had called him personally to offer him the role of the drill sergeant, later performed by Ronald Ermey.

“I must have been drinking or something,” Harris said. “I didn’t know he was a God, ya know?”

There were plenty of tips for the aspiring actors in the audience too. As Berry and Harris discussed the interaction between actors and scripts, Harris acknowledge that some lines in any script will carry more weight than others, but that doesn’t mean you hold back everywhere else. Giving an example, Harris said he was in New York recently to see a play by a well-known actor. He didn’t say who, but the actor’s performance was disappointing throughout the entire work, until one of the most important scenes came up.

“It was complete bullshit,” he said. “You were holding all your cards for that one scene? It’s too late. You lost me.”

Harris apologized for his colorful language throughout the session, but the audience was eating it up. His comments were always humorous, insightful, and brutally honest.

Following the screening, Cedillo offered a friend and me tickets to the after-party, which we didn’t hesitate to take.

The party was held in a posh mansion off Preston Road and just north of downtown. Cedillo seemed a bit nervous about taking one more guest than he was allotted but joked that if we couldn’t get in, then the two of us (who happen to look Hispanic) could sneak in the back pretending to be hired help. Luckily, we didn’t need to go that far.

Everyone at the party was nice enough, even if many didn’t hide the fact that they were really interested in meeting someone with serious Hollywood connections. By the time I remembered this was my chance to meet Harris, someone told me he had slipped out a few minutes earlier.

Oh, well. At least I can tell people I partied with Ed Harris.