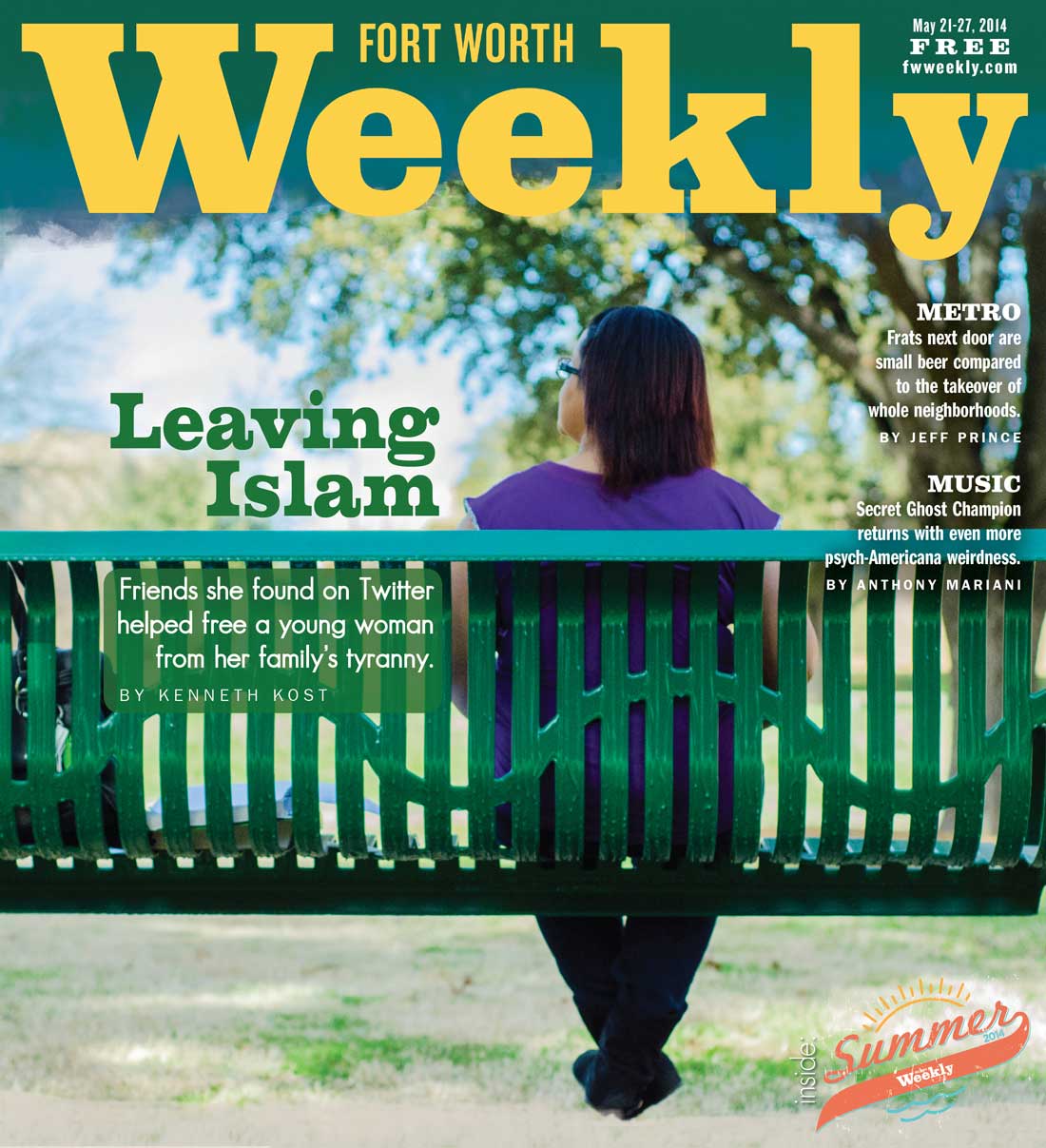 Keys to freedom can take many forms. Samya’s was an iPod, a Twitter account, and a group of North Texas atheists.

Samya is not her real name. The young Tarrant County resident asked that a pseudonym be used in this story because she fears that the family members she left behind might track her down and try to persuade her to come home — or even kill her for dishonoring them by rejecting an arranged marriage.

Her escape began more than two years ago, several states away from Texas. Here she found intellectual and physical freedom, friends, college, and the chance to build her own life. What she left behind, the 21-year-old says, was a life of abuse and imprisonment and a future she couldn’t face.

Her family is from the Middle East and steeped in an insular, extremely authoritarian version of Islam. They moved to the United States when Samya was just an infant.

“My mother has been mentally ill most of her life, and my father was very violent and angry,” she said. “I grew up with a dad I was afraid to talk to. Anything would set him off. He would come into my room, throw me against the wall and beat me, and I wouldn’t know why.” Her parents never showed her affection, she said — no hugs, no kisses.

The older Samya got, the more her father tightened his grip on her life. She was allowed to attend public schools through eighth grade. From age 15 on, she said, she was allegedly home-schooled. But there wasn’t much schooling going on.

“They kept me locked inside the house most days, and I wasn’t really even home-schooled,” she said. “I was being taught how to take care of a family — cooking, cleaning, doing the dishes and laundry. I was learning how to be a submissive housewife.”

Her father continued to beat her, as he had her older brother, until she was about 16 but never abused her younger siblings, she said. “I’m not sure why it stopped. Maybe he got older and calmed down.”

After she was pulled from public school, Samya was told she couldn’t have non-Muslim friends. She did go to an actual school once a week to pick up lessons and about once a month to do lab work for math and science classes. She wasn’t allowed to participate in extracurricular activities.

“The only kids I saw on a regular basis were the girls from my mosque,” she said.

She still thinks sometimes about those girls, many of whom were allowed more freedom than she, but most of whom intended to follow the path laid out for them.

“Some of them were allowed to drive, go to public schools and college, and had parents that were far more liberal than mine,” but those young women still accepted the idea of arranged marriages, she said.

A few of her friends also were physically abused by parents and siblings, she said. And other girls dropped out of school because they felt no need for it since they were just going to get married and be housewives.

“It’s really horrible — some of them had rough parents or were beat up by siblings,” she said. “The parents wouldn’t do anything about it, because it’s the boy, and it’s justified.

“I think the number-one thing that pushed me away from religion and forced me to get out there and question and want to leave was the abuse,” Samya said. “But, if you don’t have a problem [such as abuse], then you don’t really question or feel a need to escape. So most of these girls just feel it’s part of life or just the way things are.”

By the beginning of her senior year in high school, however, after more than three years as a virtual prisoner, Samya had discovered that that wasn’t the way things had to be. A wider world had begun to reveal itself, and it started — inadvertently — with a gift from her father.

The gift was in iPodTouch. Her father gave her the device to listen to music on, unaware of its Wi-Fi capabilities. She was familiar with the internet from school but only in a restricted sense.

“I was exposed to the web in grade school, but there were only a few sites we could visit,” she said. Using the internet at home, “it was under intense supervision because the only computer was in the living room where my dad could easily monitor me,” she said.

But with the iPod Touch, the world opened up in the privacy of her room.

“I didn’t realize the power I had in my hands until one I day I had a question I really wanted an answer to, so I Googled it,” she said. “It hit me in that moment that I could seek the answers I was looking for regarding my religion, science, and a way out to live a real life.”

“I connected to the world through Twitter,” she said. “I talked to Muslims with varying degrees of faith, extremely religious to extremely liberal, about the values my family held and about Islam.”

The responses she received on Twitter from the Muslim community varied. Many felt just as her family did, that it was her duty to honor her family and accept the values they were instilling in her, she said. Others offered comforting words and wished her well. But nothing, she said, got her any closer to a solution.

At this point, she already had begun having doubts about her religion, which she suppressed.

“I understood and believed the theory of evolution,” she said. “I began to realize the Adam and Eve story is contradicted by this and began searching for answers. I begged God for answers. I was extremely depressed.”

Samya broadened her contacts on Twitter and also began talking to several people from the atheist community. It was the first time she’d ever spoken to anyone who didn’t believe in a god of some kind.

One atheist in particular, a man named Craig, got under her skin.

“Craig was an asshole at first,” she said. “But he talked about the scientific method and told me the first thing I needed to do was to quit trying to find things to prove my religion was right and start looking for things to disprove it.”

Those kinds of thoughts still swirled in her head in June 2010, as high school graduation approached. Connecting with people on Twitter had opened her eyes but hadn’t really solved her problems, which were about to multiply.