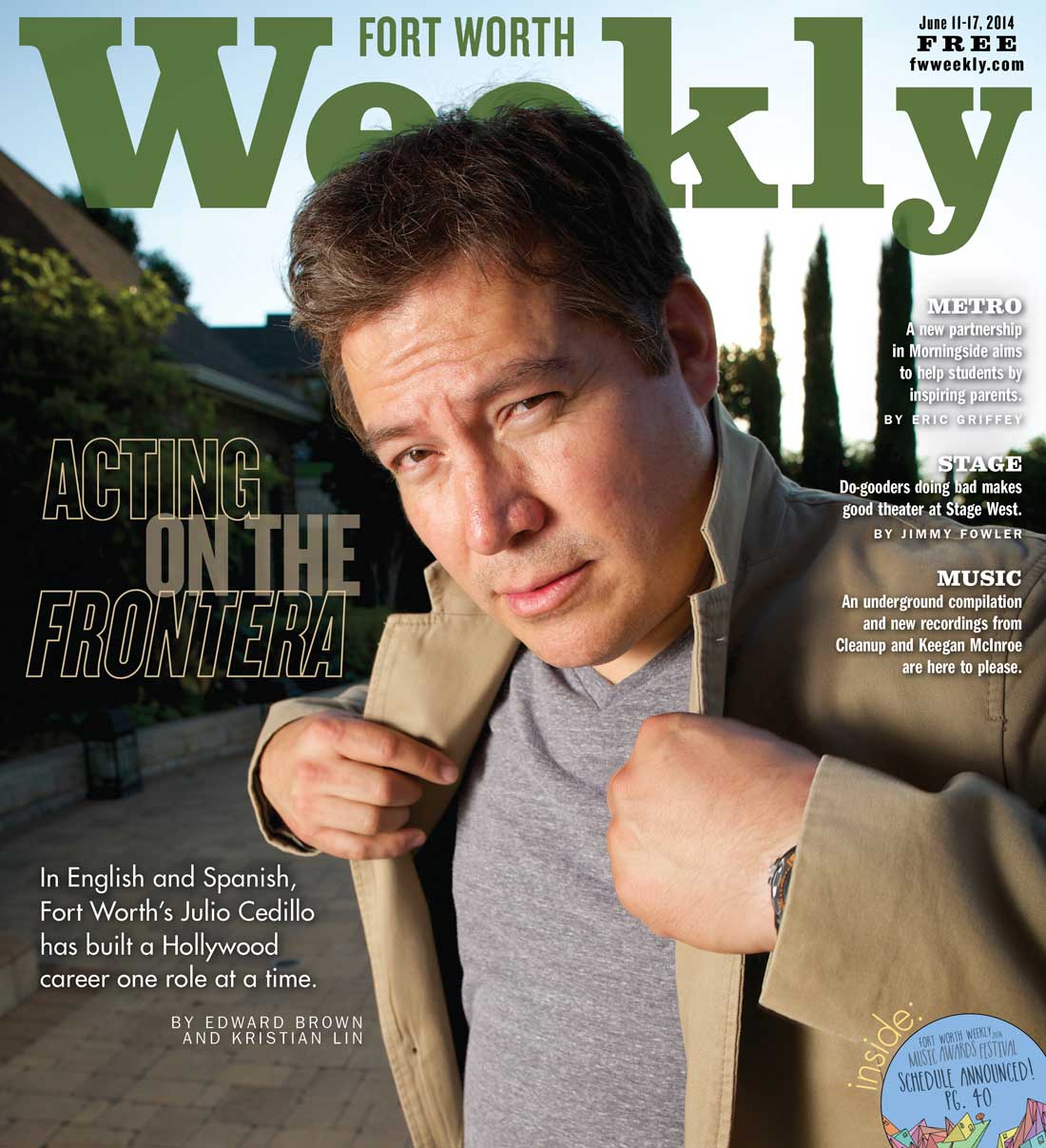 Julio Cedillo learned early on that there’s a lot less glamour in the acting profession than most people expect. He’s spent 25 years building a career by mediating between Hollywood and his native Fort Worth, between hanging out with the famous and coming home to take his kids to school. There are long hours of work and extended periods away from his family. And, OK, there’s some glitz too.

After months of filming in New Mexico for the border-based drama, Frontera, Cedillo enjoyed the flashier side of Hollywood life for one night during a screening at the Angelika Theater in Dallas last month. The drama stars Ed Harris, Eva Longoria, Michael Peña, and Cedillo.

Following the screening, the audience gave the cast and crew a standing ovation. Afterward, at a tribute to Harris, the Oscar-nominated actor joined with Frontera’s director Michael Berry to turn the focus to Cedillo. Berry called him the “nicest and scariest” guy on the set. The “scariest” part referred to his role as the film’s villain, a human trafficker with a penchant for extorting and raping the Mexican immigrants he is paid to move across the border. The “nicest” part described Cedillo’s own reputation, on and off the set.

Cedillo, who was seated next to his wife of 18 years, Claudia Coscia, stood to acknowledge the applause with a smile before blending into the audience again. As Harris and Berry chatted, Cedillo quietly took photos, indulging in what once was a hobby but has become a passion.

With decades of experience working alongside actors like Harrison Ford, Daniel Craig, Tommy Lee Jones, and others in films (The Three Burials of Melquiades Estrada and Cowboys & Aliens) and television shows (The Bridge and The Walking Dead), Cedillo’s experience runs the gamut of mainstream Hollywood. Despite his credits, he said he still finds himself in situations where casting directors don’t know much about him.

“They’ll treat you like it’s your first time,” he said. “Or I’ll meet someone new, and I still have to call out my credits … . On a really bad day, that’s hard. You gotta keep proving yourself.”

Most of the year, Cedillo is balancing work and family, something that’s not always easy. Julio and Claudia, an attorney, have two children, Karina, 12, and Julian, 15. Cedillo has been sure about his career choice since he was only a little older than Julian and attending Paul Laurence Dunbar High School in the mid-1980s.

“There was never a doubt in my mind what I wanted to do. I still feel like I’ve got so much to learn,” he said.

One of Cedillo’s earliest memories is moving with his family from Durango, Mexico, to Fort Worth in 1974. He was only four. His father, Juan, gave him some advice that has stuck with him.

“You’re in the United States, one of the greatest countries in the world,” he recalled his father saying. “You need to learn to speak English well.”

“And don’t lose the Spanish,” his mother Martha added.

As it turned out, his first English lessons came from cinema and theater.

“My fourth-grade teacher gave me this little stack of plays,” he recalled. “When you’re from another country, it’s a relief to find that somebody wrote these words that you can now use. I could speak English, but I couldn’t put thoughts together very well. That’s when I knew I wanted to be an actor. I could use somebody’s words for myself.”

Classic Hollywood fare was another entry point into the English-speaking world. “As my mother started to have more children, she couldn’t watch over me and the babies, so she’d sit me down in front of the TV. I saw all these old movies. I’d imitate James Mason, even though I wasn’t supposed to be watching Lolita.”

At this, he does an impression of Mason’s refined English accent.

“I was sitting there going, ‘Wow, this is great,’ not knowing that I was perfecting my English,” he said. “As I started to feel more comfortable with this world I created in my mind, it helped me get through school.”

An acting career wasn’t on the minds of most kids in the Diamond Hill area where he was raised. Cedillo remembers W.A. Meacham Middle School being overrun with gangs. On one occasion, the school’s principal was stabbed. After passing an exam to get into the academically more rigorous magnet program within  Dunbar High known as the HSEP — High School for Engineering Professions — he was able to focus less on his safety and more on school and acting.

While several of his classmates were getting scholarships at four-year universities, Cedillo followed his own plan. He was accepted into the Dallas-based KD Studio (now Actors Conservatory of the Southwest) for a two-year program.

He got his first professional acting experience with Cora Cardona, founder and director of Teatro Dallas, a theater company that promotes international theater through Latino experiences. At 18, Cedillo reached out to Cardona as part of a school project. That meeting led to a professional relationship; Cardona mentored the aspiring actor and offered lead roles in her burgeoning theater.

“Somehow, he understood theater was the basis of an acting career,” she recalled. “Most great actors come from theater, and he wanted that experience as a stage actor. Around that time in the mid-’80s, there weren’t many Latino artists on the well-known stages.”

She still remembers the “uncanny talent” that he brought, all with little formal training. His first major role was that of Don Juan in Teatro Dallas’ rendition of that play.

“We did several versions of Don Juan,” she said. “This Don Juan character always appears at night, so I decided to turn [him] into a vampire. The show became kind of a cult favorite. We packed the theater, and it was because of Julio.”

Cardona watched the young actor grow in confidence and self-esteem under her direction.

“He lives the life of an actor to the fullest,” she said. “It’s about the consistency of being a working actor and dealing with rejection and all the obstacles artists go through. That is something I admire him for.”

While studying at KD, he met Mary Lyn Henry, the head of casting for ABC’s daytime TV shows. She was conducting a workshop and advised the neophyte to move to the Big Apple, promising to help him find an agent.

“You couldn’t say no to that, so I did it” in 1990, Cedillo said. He realized he had a friend living in New York, and the friend and her sister offered him a couch to crash on. “I was like John Ritter in Three’s Company, living with two sisters and sleeping on a couch. I lived there for two years, and it was the most amazing time. It got me out of [looking at the world] through Texas.”

He got his first professional break quickly when he auditioned for a role opposite George C. Scott in an ABC-TV movie called Finding the Way Home.

“I went in to read for a small part, but the director, Rob Holcomb, had me read for a bigger role. It was for a 40-year-old man, and I was 20,” Cedillo said.

Elizondo “told me that the script is just a blueprint, so take it for what it’s worth,” Cedillo said.

While New York was changing his Texas-centric outlook, even more powerful forces were calling Cedillo home.

Julio and Claudia had met in their late teens through a young professionals program called Junior Achievement. Claudia clearly remembers their first experience together.

“We had to form little businesses, and Julio and I ended up in the same company,” she recalled.

At the time, Claudia had lived in the United States for only a few years. Her father was an executive at Alcon. After the Junior Achievement program, the two young people’s paths diverged, and it would be eight years before they got together again. While Julio was in New York, Claudia went to the Baylor School of Law and began her legal career.

“When I had to go to New York, we kept writing each other and talking on the phone,” Julio said. “And so I realized ‘What am I doing in New York?’ All the forces that be were saying ‘No, you need to be in Texas.’ So I came back because of family. I came back because I had a potential relationship with someone I did care about. Someone I eventually married.”

Julio’s free-spirited personality and haphazard work schedule often clashed with her desire for more predictability, Claudia said. She is general counsel for Bimbo Bakeries, a demanding job but one that provides a steady salary and balances her husband’s generous but often unpredictable income.

“I’m very much a planner, so I’ve learned to be very flexible,” she said. “The last thing I’d ever imagine was being married to an actor. I think his life story is about not giving up and believing that the sky’s the limit.”