A photo of Trinity River Vision executive director J.D. Granger standing beside children holding signs that say “I go nuts for runner’s [sic} butts” and “Will cheer for beer” is getting attention after local blogger Durango posted it on his site.

“It’s such an embarrassing picture in so many ways,” Durango told Blotch on the phone. 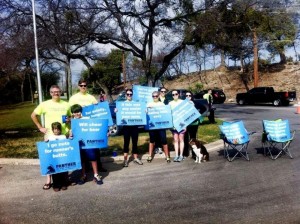 He said a friend sent him the photo (shown at bottom left) after seeing it on the Panther Island Pavilion’s Facebook page (it now appears to have been removed).

Durango was unable to read the signs, so he enlarged the photo and was amazed to see two small children holding blue signs that referenced Panther Island, beer, and butts.

TRV spokesman Matt Oliver explained the backstory to Blotch: Oliver had learned back in February that the Cowtown Marathon route would pass Panther Island Pavilion, and so he made up signs for he and friends to hold as the runners passed.

He looked online at signs being held up at other marathons, chose some of the “cheesy” ones, and printed up a handful of signs, he said.

Granger and his two children (the boy and girl shown in the enlarged photo) arrived shortly before the runners approached, and they grabbed a few of the signs that weren’t being used and held them without paying much attention what was written on them.

“At no point were his kids involved in the making of the signs,” Oliver said. “[Granger] and the kids were walking down there, and there were six or seven signs left over and they picked up some to cheer on the runners.”