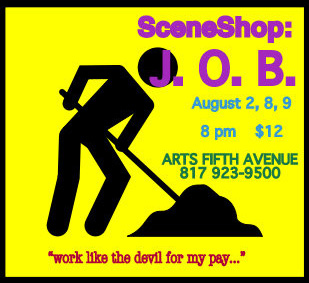 A national polling organization just did one of those survey thingamajigs asking Americans if they were satisfied with their current jobs. Sadly, just like in polls past, very high numbers of people –– more than half –– reported either deep dissatisfaction or active hatred toward the employment that keeps them (barely) afloat. “That’s why they call it ‘work,’” goes the cynical old person’s saying, but given the hours we spend on the clock, the relationships we form, and the goals we achieve (or don’t), our jobs can come to define our lives in ways we didn’t expect and may not like.

Those are the themes explored in the comic and dramatic sketches and monologues featured in J.O.B., the 19th summer showcase from the Fort Worth theater group SceneShop. Co-founder Steven Alan McGaw writes and performs short adventures in Officeland along with his usual cohorts (writers Natalie Gaupp, Nicholas Irion, Chris E.Gepp and other scribes; actors Peggy Bott Kirby, Debbie Dacus, and Dale Shelton, among other performers). The evening happens 8pm Fri & Sat at Arts Fifth Avenue, 1628 5 th Ave, FW. Tix are $12. Should you need to drown your sorrows, wine will be on hand, as well as live musical performances by Pasticcio on August 8 and City Lights Singers on August 9.