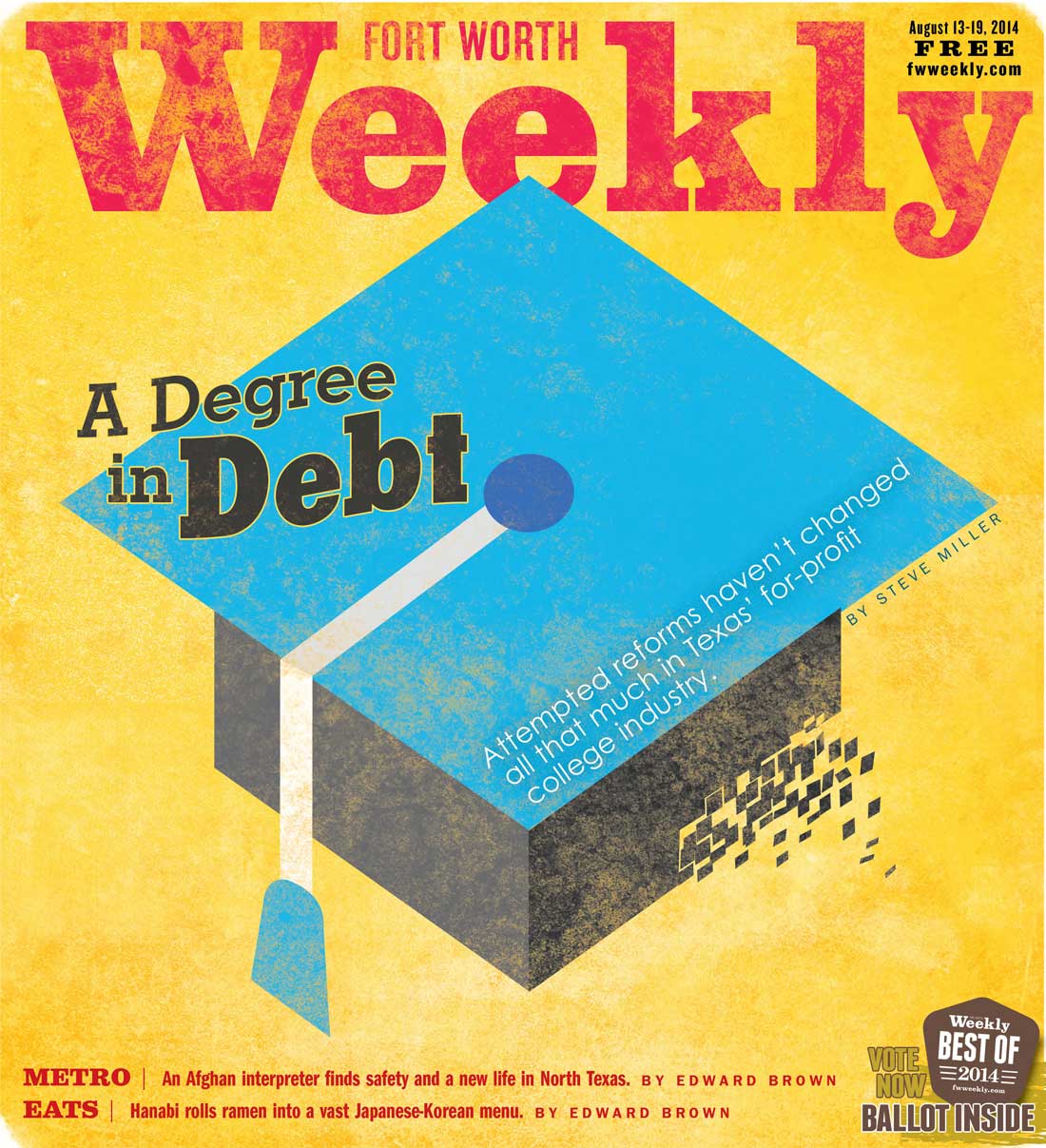 Five days a week, Robert Rowlett heads off to work at his $7.75-an-hour job with the City of Dallas’ sanitation division. From his roughly $310 a week in take-home pay, he sets aside whatever he can to pay down the $25,000 student loan he took out 10 years ago. He still owes several thousand dollars.

He got the federally backed loan to cover tuition for the auto mechanics program at ATI Enterprises, a string of 500 for-profit trade schools based in North Richland Hills. He was an ex-con looking for a break in 2003 when he saw the TV commercial for the school, promising a future he could not conceive of.

“I called them, and they took me around campus, and I talked to the instructors, and it was nice,” Rowlett, 54, says. “They greeted me, they treated me kindly. And I said ‘I’m going to give you a try.’ ”

At the end of two years, he had earned his auto mechanic’s certificate with a 3.25 grade point average, never missing a day of class, he says.  But when it came time to graduate, “they told me I owed them more money and that I couldn’t get my diploma until I paid them more.”

Rowlett fought ATI over that and finally got the certification. Still, he never found the mechanic’s job he had hoped to get. He does work on cars, but only on weekends, out of his house, to make a little extra money.

Today Rowlett lives with his mom, helping her pay bills when he can on his meager salary. And if his studies at ATI didn’t get him a better job, they’ve had other lasting effects. Whatever refund he gets each year on his income taxes is taken by the government to help pay down his debt. And the loan, he said, has “got my credit all jacked up. I have to pay more for anything I try to buy on credit.”

Rowlett is among thousands of former students in Texas whose painful experiences with trade schools and for-profit colleges led to federal investigations, lawsuits, and in one case criminal charges against the schools’ operators over the last several years.

Investigators found that some schools were using fraud to recruit students and promising certification for programs that never happened. By inflating their records of success at placing graduates in better-paying jobs, the operators convinced students to take out federally backed tuition loans. The schools pocketed the proceeds, and students in many cases ended up with worthless degrees, no better job prospects than they had before — and debts like Rowlett’s, which they still were responsible for. In some cases counselors advised students to lie on their loan applications.

The results of those investigations were significant: Whole chains of schools were closed down, including almost all of ATI’s campuses. Federal prosecutors have extracted millions of dollars in settlement penalties from the schools. Last year, Lubbock-based American Commercial Colleges agreed to pay the federal government up to $2.5 million to settle a fraud case that originated with whistleblower revelations.

From another point of view, however, not all that much has changed, at least in Texas. State oversight of the schools has increased somewhat, due to legislation, but remains relatively lax.

The Texas Workforce Commission, which is charged with overseeing the for-profit schools in Texas, did little while the federal investigation was going on. At that time, the TWC had a place on its website for students and staff to file complaints, but it was a cloaked portal that was decidedly user-unfriendly. Students with grievances said they found it difficult, if not impossible, to get anyone at the state to pay attention.

Since then, TWC has levied fines against some schools, and there is now a more accessible complaint line. But the agency’s attitude toward finding and fixing problems still seems almost disinterested.

“I don’t have specifics on the complaint process,” said Lisa Givens, TWC spokeswoman. “If there is information we can provide to a student who calls, we will do that.”

Isn’t it part of TWC’s role to protect students and potential students in the career school marketplace?

“One of the roles we have is to provide information so that people can make an informed choice,” she said.

A new report by the National Consumer Law Center on state oversight of for-profit schools singles out Texas for its lax enforcement. The report notes that overseeing trade schools and for-profit colleges is just one of TWC’s roles among many others, like dealing with unemployment claims and employee beefs against companies.

“Given this long list of disparate responsibilities, it is not surprising that in 2011 the TWC was caught unprepared when a local news outlet revealed that schools owned by ATI Enterprises Inc. lied about job placement rates,” the report notes. “Only after receiving harsh public criticism did the TWC take action against ATI.”

Throughout the process, students have been left with debts that are not being erased. Such loans can be a burden even to graduates of  top-flight universities who have excellent skills and job prospects. They are a much heavier millstone to those who find themselves only with the burden and no benefit.

The problem is so widespread that some observers believe it is affecting the whole picture of student loans.

“The for-profits are dragging down the student funding system,” said Natalia Abrams of StudentDebtCrisis.org, a nonprofit that works on education costs. She attributed half of today’s $1 trillion in student debt to for-profit colleges.

The problems that federal investigators found at Texas for-profit schools and colleges were so serious and so broad that they seemed sure to lead to reforms:

Last year Lubbock-based American Commercial Colleges agreed to pay up to $2.5 million to settle a civil complaint filed against the college by federal prosecutors alleging that school officials had operated a complex and duplicitous scheme under the noses of state regulators for years.

The civil case, put together with evidence from whistleblowers, alleged that ACC, a 50-year-old enterprise with locations in six cities in Texas and Louisiana, “falsified documents to obtain loans and grants for a number of students, who turned the money over to the college for a promise of a portion of the proceeds.”

The complaint also claimed the college obtained private loans for students with the help of a local banker to satisfy federal requirements that a college receive no more than 90 percent of its overall tuition revenue from public funds.

Under the scheme, ACC arranged the personal loans for students so that its books would pass the annual audit of funding sources, then paid the money back to the bank afterward.

Students were told that, unless they signed the loan papers, “the school would fail and their money and time would be wasted,” according to the complaint.

“TWC knew,  because it was the first place I went when I wanted to tell someone what was going on,” said Delgado, who spent three years working as a director at ACC, watching and sometimes even participating in the fraud.  He said students were trying to find a way to get the agency to listen as well, to no avail. Some were told to wait until the end of the term to file a complaint, he said.

Students were ushered through a mysterious loan process.

“They called a number of us into a meeting at the end of the semester in October 2010 and told us we had to continue to pay our tuition but that some students didn’t have the money,” said Francesca Gutierrez, who attended ACC from July 2010 to March 2011.  “They asked us if it was OK to take out loans in our names, which would be paid back by them.”

She said she signed a paper requesting a loan of $500 and never heard about it again. She said at least eight other students in her classroom alone signed up for loans that day.

Gutierrez said she had no job when the loan was taken out in her name.

“It wasn’t until the U.S. Department of Education was involved that the state took it seriously,” Delgado said. The state closed the Abilene and Lubbock campuses of ACC in early 2012, two years after the federal inquiry began.

In May, Brent Sheets, president of ACC, pleaded guilty personally and on behalf of the college chain to theft of government funds and aiding and abetting such theft. ACC, with resources estimated at $10 million, faces a $500,000 fine and up to five years probation. And Sheets faces up to three years in prison.

ACC’s remaining Texas campuses, in Wichita Falls, Odessa, and San Angelo, were closed in June. Hundreds of students were left with student loans and no school to attend.