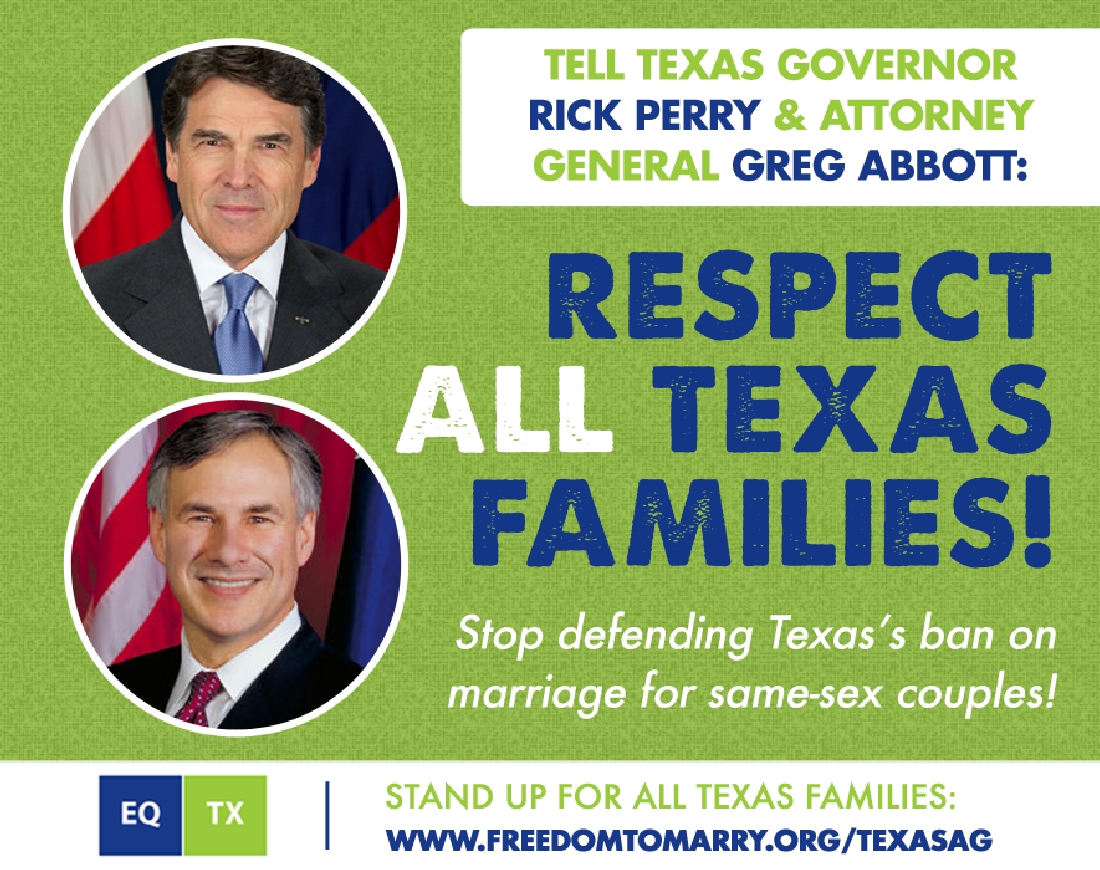 Fort Worth cops are getting national notice for a public service announcement in which they, as TIME put it, “argue in favor of same-sex marriage.” No arguing actually occurs. Three police officers merely support a fourth –– Detective Chris Gorrie –– in his wish to marry his same-sex partner. A case that challenges the Lone Star State’s ban on same-sex marriages is set for a hearing in the Fifth U.S. Circuit Court of Appeals on Friday.

Gorrie says in the PSA that “one day we’d like to get married just like everybody else.”

“He puts his life on the line just like I do,” Officer Jay Doshi says in the spot that’s being aired in major cities across the state. “Texans believe in freedom and liberty, and part of that is to be able to marry who you love, so Chris should be able to marry whoever he loves.”

The spots were paid for by Freedom To Marry, a New York-based civil rights group that promotes marriage equality. More than 30 states currently provide freedom to marry, but Texas ain’t one. Gov. Rick Perry compares homosexuality to alcoholism and says marriage is meant for one man and one woman. Freedom To Marry looks for cops, teachers, firefighters, and others to personalize their cause. Gorrie and his three colleagues do a great job of spreading the word. Perry does a great job of being a constant disappointment.

American kids enjoy getting smartphones, tablets, televisions, and other glitzy gifts for Christmas, Hanukkah, and Kwanzaa. Needless to say, most of them would feel Scrooged if all they got for the holidays was a glass of water. Children in Sudan, however, would be thrilled.

Thousands of people fled Sudan during the country’s civil war from 1983 to 2005. A group of more than 20,000 boys between the ages of 7 and 17 from the Nuer and Dinka ethnic groups who were displaced and/or orphaned during that time were dubbed “the lost boys of Sudan.” Many were fleeing to avoid being forced to serve as child soldiers. They crossed hundreds of miles of rough terrain on foot and survived unspeakable horrors, including animal attacks, disease, and hunger. Many died along the way, and those who survived ended up in disease-ridden camps in Ethiopia, only to have to flee again when that country erupted in war.

The lucky ones made it to camps run by the Red Cross and other rescue groups. Charities such as Friends of the Lost Boys DFW and various missionaries found homes for hundreds of the boys in North Texas.

Gatjangd Deng was one of those boys. Missionaries brought him to Fort Worth in 2000 after stints in Ethiopia and Kenya. Now he and a fellow Sudanese have started a charity to help rebuild their war-torn homeland. The Village Help Foundation raises money to dig water wells for villages. The group has plans for 22 wells in villages around Sudan, to start. A well costs about $14,000. The charity also delivers medicines to clinics and hospitals.

“There is no access to clean drinking water,” said Deng, now 37, who has become a U.S. citizen. “Many people are dying from diseases that are preventable.”

To make a donation or get information visit villagehelpfoundation.com.