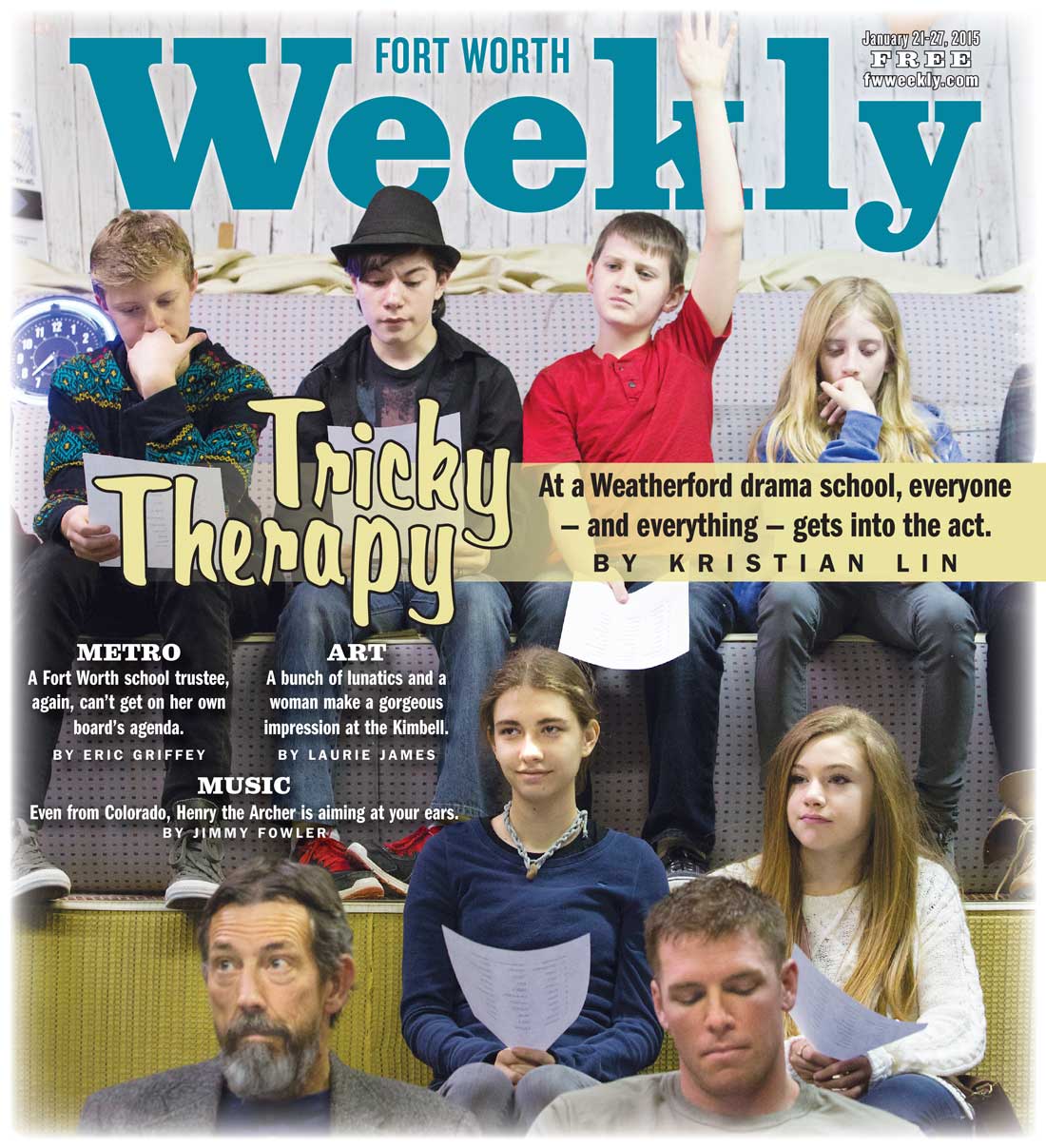 They don’t waste any time at the Weatherford Acting, Film, and Stunt Academy, known as WACT. When I pay my first visit there on a frigid evening in January, I’m immediately directed to a seat on stage. I’m there to interview staff members and students, both children and adults, but it turns out that I’m also going to play a role in the education process.

Twila Barnett, who runs the Parker County private school from a set of buildings and outdoor facilities on the acreage behind her home, has also gathered about 30 more students of varying ages to watch me, so they can hone their interview skills. Twila believes that not only will learning the ins and outs of the process help her actors in auditions, it will help them even outside the acting profession, in situations such as job interviews. Ranging from 11 to 60 in age, my interview subjects do well at following her instructions to make eye contact and avoid fidgeting. Twila’s husband Mark operates a camera beside me, keeping my subjects framed as well as students at a distance behind them who are engaging in silent improv exercises.

As its name implies, the school teaches all aspects of the entertainment industry from acting to production to stuntwork. What makes it different from other acting schools is that it’s also designed to teach life skills that will help steer children through the numerous pitfalls that can present themselves to Hollywood’s child actors. Now it’s a growing business that is placing talent in Hollywood ranks at an increasing rate. And its roots are in an acting family in Fort Worth.

The students refer to Barnett as “Miss Twila,” even the adult ones.

“I want them to find me approachable and get a hug from me if they need one,” said the slender 54-year-old. “At the same time, I want them to learn respect.”

It’s a style of teaching that came to her early in life. In middle school in Fort Worth, she found herself hanging out with deaf classmates, eventually learning sign language from them. She learned enough about communicating with them that the principal’s office took to calling her in whenever they needed help talking to a deaf student. She continued doing this at Trimble Tech High School and, while she was still at Trimble Tech, was hired to do the same professionally at what was then called Tarrant County Junior College.

Her own rough upbringing made her sympathetic to kids who needed help.

“My father was the best father in the world when he wasn’t drinking,” she remembered. When he was, he physically abused her mother and their two older children, including Twila. She and her older brother sometimes lied to protect their two younger siblings from the abuse.

At 17, Twila ran away from home. She was away for only three days, but it was enough to make her father vow to stop drinking, a promise that he kept until his death in 1994.

“If I’d known that would work, I would have run away when I was 4,” she said.

In 1981 she was four credits shy of her degree in special-needs education from TCJC when she found out she was pregnant with her first child, Dakota, whom the family calls “Star.” Four years later, she gave birth to Bug.

It wasn’t until after Bug was born that she met Mark. They married, and he enlisted in the U.S. Army to support her and the kids. She started running a 24-hour daycare center for local children, some of whom had been diagnosed with ADHD.

“They were class clowns,” she said. “I couldn’t keep them quiet, so I wound up writing little plays that they could act out to help them cope. I found out that kids with special needs can be very talented.” She calls this “tricky therapy,” and she uses it to this day.

However, it wasn’t the drama–school environment that got her kids interested in acting. Her older son, Brandon Hall, known as Bug, was only 3 when he started saying he wanted to “do that” when he was watching cartoons on TV.

“It took me a while to figure out that he was talking about acting and directing,” said Twila. Five years later, Gemini, also at 3, picked up the interest in drama from his older brother.

“I didn’t expect the kids to get booked [immediately],” she admitted. “I took them to auditions anyway because I wanted to show them that I believed in them.” But at 9, Bug won the role of Alfalfa in the 1994 Hollywood version of The Little Rascals, in which future stars Ashley and Mary-Kate Olsen and Raven-Symoné had only supporting roles.

The Barnetts promptly moved to Los Angeles to take advantage of the offers that came Bug’s way in the wake of the movie’s success. Shortly thereafter, Gemini landed a spot as a regular cast member on the ABC drama Second Noah.

“I really had to learn the business side of Hollywood,” said Twila.

During this time, the boys’ careers were managed by longtime Hollywood talent manager Bill Civitella.

“It was a pleasure working with them,” said Civitella, who is now based entirely in New York as a producer. “A lot of moms are a pain in the neck, but Twila was top-notch. She kept them prepared and well-mannered.” He added that he’s not surprised that she’s now doing well.

Second Noah filmed in the Tampa area, so Barnett moved her family to Florida during a period when her husband was mostly posted overseas. Her sister Tammy and her husband moved in with her to help take care of the children. When the show was canceled after two seasons, Barnett decided to stay there, even though her kids wanted to move back to Hollywood.

“I decided that my children needed stability,” she said. They shuttled back and forth for movie auditions and pilot season — usually January to April, when Hollywood shoots pilot episodes for prospective TV shows.

Since then, Bug has built an adult career marked by a steady flow of guest shots on TV shows (CSI: NY, Castle, Masters of Sex), a recurring role on the now-defunct NBC show Revolution, and lead roles in a number of low-budget films that have been completed but not yet distributed. That includes the marijuana comedy Body High and the thriller Subterranea, in which he portrays a character known only as “The Captive,” a young man raised in total sensory deprivation who must adjust to the outside world.

Gemini’s career has been more sporadic. He hasn’t had any screen credits since the 2006 romantic comedy Mr. Fix It, starring David Boreanaz, but fans still remember him as the 8-year-old boy who says, “Linda, you’re a bitch,” in the Adam Sandler comedy The Wedding Singer.

Where Dogs Go before They Go to Heaven