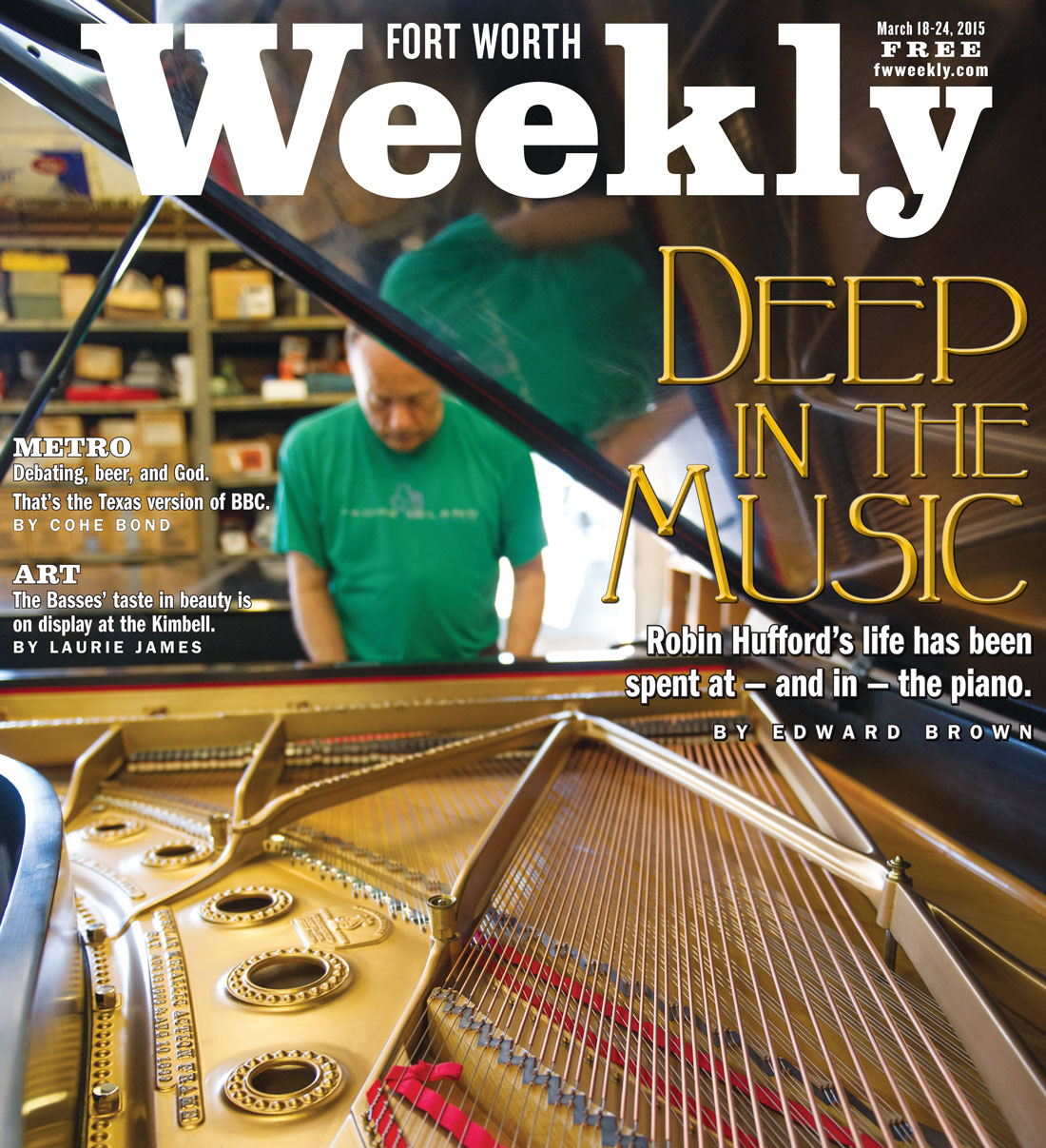 The piano has left an indelible mark on Robin Hufford. From his earliest memories growing up in a small fishing camp on Lake Worth, the iconic instrument has followed him like a melodic theme running through a lifelong symphony of bittersweet setbacks and episodic successes.

Hufford, 68, is a pianist and piano technician. His days are filled with buying, repairing, and rebuilding pianos of all types and sizes from his southwest Fort Worth business, Hufford Piano Services, DFW. On a recent wintry afternoon, Hufford was examining a piano that he had just finished refurbishing. The day before, icy roads had shut down schools and businesses, but he’d made the slow trek to Bass Performance Hall to tune a 9-foot-long Steinway concert grand for Performing Arts Fort Worth. The demands of his job don’t allow for delays, even those handed out by Mother Nature.

From an early age, he used the piano to escape poverty and a less-than-ideal family environment. After he came back from military service in Vietnam in 1965, music served as a way for him to channel his energy and prodigious intellect in pursuit of a career as a concert pianist. When setbacks knocked him off that path, he focused his efforts on mastering the art of rebuilding pianos and studying the rich history of that instrument.

The love affair has never diminished, but it has taken him in many unexpected directions. His keen interest in chess led him to teach courses on the game at Tarrant County Community College in the ’90s, and his photographic memory led to brief but profitable stints at blackjack tables. His only vice, far from drinking or smoking, is an occasional Starbucks Frappuccino; his views on political topics defy categorization.

Back in his workshop, carefully placed propane heaters provided temporary relief from the frigid outside air as Hufford and his two technicians, David Fialho and Trenton Wood, discussed the day’s work. The two employees listened intently as their boss spoke softly and deliberately, giving directions. Periodically, he stopped to rub his back, damaged by three car accidents, including one that nearly took his life 25 years ago.

The pianist’s slim build and appearance are as mild-mannered as his personality. His short-cropped brown hair, now graying, and lightly chiseled features accentuate deep-set, kind eyes.

The south-facing wall of his shop is lined with shelves of miscellaneous parts and tools, including a once-brown, now fire-blackened piano bench. The bench is one of the few reminders of a devastating fire that engulfed several pianos and a large portion of his workshop 10 years ago.

The modern concert grand piano, he explained, is one of the most intricate and complicated machines ever devised –– the result of hundreds of years of evolution from harpsichord to clavichord and finally to the familiar modern-day manifestation that developed nearly two centuries ago.

A grand piano has 8,000 to 9,000 parts, many of them moving in perfect synchronization as the force of a pianist’s fingers transfers through dozens of blocks, springs, hammers, and eventually to the strings themselves.

Becoming a certified piano technician requires a deep understanding of the relationships among these parts. While building and tuning pianos can be considered a science, making music is an art; balancing the two worlds can be challenging.

“Pianists often have misconceptions about what a piano can and can’t do,” he said.

Hufford has a contract with the Modern Art Museum of Fort Worth to maintain the concert grand in its lecture hall. A famed concert pianist recently told him the keys on that piano were too tight.

“He was used to loose, wobbly keys,” Hufford said. “So I told myself ‘OK, I’m just going to have to ruin these key bushings.’ Every pianist has his own piano and thinks that’s the way a piano should be.”

Customers don’t score much better in his rankings. Clients often tell him that he has changed the feel of the piano keys, when all he did was tune the strings.

“The touch you get is a function of the integration of data streams,” Hufford said.

That integration of expectation and actual touch is what he calls “the conscious moment” that the musician or customer experiences.

Expectation plays a big role, he said. “If you change the sound, then the touch seems to change. Technicians have to learn this.”

Such insights into Gestalt psychology and neuroscience come naturally to Hufford. Though it may seem eccentric to some, he prides himself on his encyclopedic knowledge of meteorology, psychology, and especially world history.

The fact that his reputation now revolves around tuning and repairing pianos slightly amuses him.

“I never intended to be a piano technician,” he said. “It just happened.”