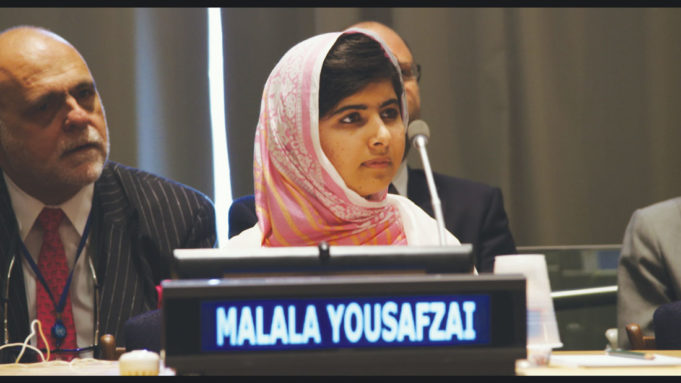 We all know the story of Malala Yousafzai, the Pashtun girl from northeastern Pakistan who was shot in the head three years ago this week by the Taliban for defying their ban on girls going to school. She recovered to advocate for the education of girls throughout the developing world and win the Nobel Peace Prize for her work, becoming the youngest-ever Nobel laureate. (And what did you do when you were 17?) This story doesn’t need any sort of gilding, just a certain amount of humanizing detail. The documentary He Named Me Malala provides enough of the latter that you can forgive its needless share of the former.

The film follows the heroine in the safety of Birmingham, England, where she was taken for medical care after her near-fatal wounding, which has left her permanently deaf in her left ear and partially paralyzed on the left side of her face. She and her family have settled in the U.K. after the Taliban made it clear that she would be killed if she returned to the Swat Valley, the mountain-encircled enclave where she grew up and where her father Ziauddin had founded and run a school. Despite the fatwa, she and her father are determined to go back one day, reopen for business, and welcome girls as students again.

Director Davis Guggenheim is no stranger to Nobelists — his 2006 documentary An Inconvenient Truth undoubtedly helped Al Gore book his trip to Norway. Despite his Oscar win, Guggenheim is neither a distinctive visual stylist nor an intellectually rigorous filmmaker who asks hard questions. To prevent the movie from degenerating into a series of talking heads, he employs animator Jason Carpenter to illustrate some of the anecdotes Malala and Ziauddin tell about their life in the Swat Valley. These pastel-like interludes are undoubtedly better than live-action re-enactments would have been, but they add little to the story. Old photographs of the Yousafzai family taken against gorgeous mountain greenery do much more to tell us why the family considers Britain only a temporary home. As for the rigor, it’s not clear that an Errol Morris-like approach would have yielded more insight than what this movie gives us. Still, I wish Guggenheim had shown us more of Malala’s work helping build schools for girls in places like Kenya and Nigeria. I can’t help but wonder what some of the great Iranian filmmakers (many of whom have documentary experience) might have made of her story.

Guggenheim is fortunate that Malala is an engaging subject as well as a courageous activist. Before and after her shooting she demonstrates the remarkable self-possession that allows her to deliver such cogent speeches in both Pashto and English. She also has a gift for lyricism that she shows in the opening segment, when she narrates the story of her namesake, Malalai of Maiwand, the 19th-century teenage poet and martyr who’s known as Afghanistan’s Joan of Arc. Her detractors in the Muslim world have accused her father of ghostwriting her work, but clearly she has inherited her social consciousness and flair for language from a long line of public speakers. This includes Ziauddin, who delivered fiery anti-Taliban speeches in Pakistan despite a stammer and the fact that numerous others were killed for saying the same things.

In the scenes with Malala’s family, she also gives endearing reminders that she is still a teenage girl. She has two little brothers who are completely unawed by their sister’s worldwide celebrity, and the younger one, Atal, is a mischievous boy who steals more than one scene in this movie. To be fair, Malala herself seems well grounded, and when Guggenheim points out the copy of I Am Malala on the crowded bookcase in her bedroom, she jokingly dismisses her memoir as “very boring.” She makes bemused observations on her British classmates who all seem to have boyfriends, and she debates Atal over whether their fellow Pashtun and superstar cricketer Shahid Afridi has lost a step with his age. (While she hews to her native culture’s standards of modesty, she does enjoy looking at pictures of the handsome Pakistani athlete, along with others of Brad Pitt and Roger Federer.)

No American worth taking seriously would quarrel with Malala’s quest to fight women’s oppression through schooling, but the movie raises an even larger point. Right now, certain religious types in America are waging a war on science, literature, critical thinking, and anything else that might conflict with their fundamentalist point of view. He Named Me Malala is a ringing endorsement of the value of education and freedom of expression, not to mention the threat that those things pose to people who are ruled by prejudice and obsessed with power. In her courage and resolve, this Muslim girl has a refresher lesson for us all.