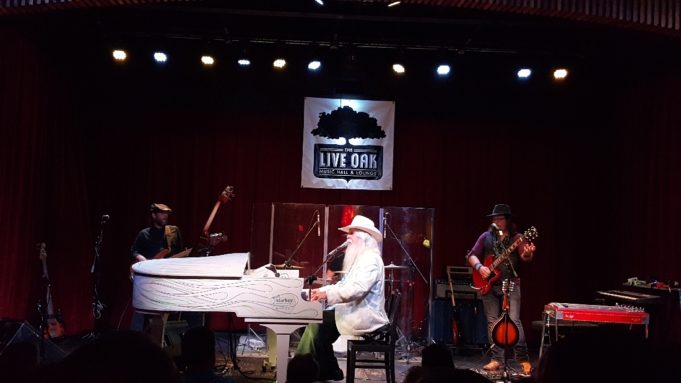 In late 2011, when the Live Oak Music Hall & Lounge (1311 Lipscomb St, 817-926-0968) was still being built, I spoke with someone in close connection with the venue about its booking goals. “Bill [Smith, founder and original owner of The Live Oak] wants to go all out,” my source said. He wanted “huge artists in an intimate setting. Think George Strait.” When I heard that it sounded nothing short of insane to me, and over time The Live Oak proved that ambition does not always deliver the dream. Since opening in the summer of 2012, every aspect of the Near Southside venue, from the kitchen to the concerts, has gone through too many leadership changes to count. But one thing hasn’t changed: The music hall is a beautiful place to see a show. For that reason alone, I always thought they would land a white whale, even if it didn’t turn out to be an act as massive as Strait. Thursday night’s show featuring living legend Leon Russell delivered on that ambition.

The 73-year-old Russell took the stage in his signature white suit and cowboy hat at 8pm and delivered almost two hours of classics, kicking off the show with a cover of Ray Charles’ “I’ve Got a Woman.”

“That was the Elvis Presley version of that song,” he told the audience. “I’ve always preferred that arrangement.” Russell went on to tell the crowd the story of when he first met The King. “I was excited to meet him, but the first thing I said to him was ‘Elvis, how come you star in so many bad movies?’ ”

And with that, the tone was set for the rest of the night. It was an evening of not only songs, but stories of Russell’s nearly 60 years of recording and playing live.Throughout the night, Russell and his three-piece band jumped from originals like “Stranger in a Strange Land” and “Dixie Lullaby” to covers of the Beatles’ “I’ve Just Seen a Face” and Ivory Joe Hunter’s “Kansas City Woman.” His take on songs everyone has heard hundreds of times, like Hoagy Carmichael’s “Georgia on My Mind” and “Wild Horses” by The Rolling Stones sounded as fresh as the day they were first released. After telling a story about being in the studio with blues great B.B. King, Russell launched into an inspired rendition of a track of his that King once recorded, “Hummingbird,” followed by crowd favorites “Tightrope” and “Delta Lady.” Continuing the theme of bouncing between covers and originals, Russell sat alone at his piano and performed solo versions Charles Hutchinson Gabriel’s “His Eye Is on the Sparrow” and his own hit “A Song For You,” as the crowd stood silent, mesmerized. He and his band rounded out the show with a medley of his hits from ’70s. The audience was still in a frenzy when the house lights came on.

Everyone walking out of that building understood they had just seen something special. Fans of all ages, some who were seeing Russell for the first time and many veterans of numerous  shows, were talking about how important the show proved to be. Sure, Leon Russell tours seemingly non-stop and his schedule brings him through North Texas on a yearly basis, but the opportunity to see an artist of his magnitude in a venue as intimate as the Live Oak was unique. And anyone who is a fan of Russell’s shouldn’t miss it if the opportunity comes around again.