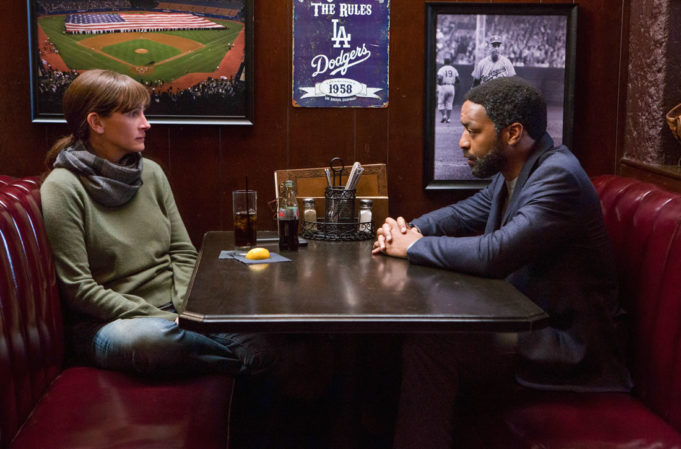 Juan José Campanella’s The Secret in Their Eyes won the Oscar for Best Foreign Film in 2009, and no wonder. His extensive experience directing episodes of American TV (Law & Order: SVU) gave his Argentinian cop thriller a familiar feel. A Hollywood remake seemed preordained, and now it arrives under the title Secret in Their Eyes, losing quite a bit in the translation.

In 2002, L.A.’s district attorney’s office is sundered when investigator Jess Cobb (Julia Roberts) is called to a crime scene and discovers her own teenage daughter (Zoe Graham) raped and murdered. The best efforts of FBI agent Ray Kasten (Chiwetel Ejiofor) and prosecutor Claire Sloan (Nicole Kidman) nail the suspect (Joe Cole), but he walks free because he’s an asset in the War on Terror. The three principals reunite in the present day because Ray has found the killer again after a lengthy disappearance.

This is the latest from writer-director Billy Ray, who previously directed two excellent detective movies based on real-life stories (Shattered Glass and Breach) but has spent more time writing scripts for other people. He takes a fragmentary approach to the story, toggling back and forth between the past and present, and while he’s not without skill, he dilutes the Argentinian film’s power and focus. Switching the setting from a 1970s military dictatorship to post-9/11 America presents Ray with some issues, but that’s not the biggest problem. A good writer of workplace banter, he turns out to be much less effective at directing action sequences. The footchase through Dodger Stadium can’t hold a candle to the famous chase through the soccer stadium from the original.

Ejiofor and Kidman do have chemistry, but even so, the unrequited romance between their characters feels like a distraction. Meanwhile, Roberts looks properly hollowed-out and very, very old from her character’s experience, but the part of a vigilante cop doesn’t sit easily on her. It’s strange that none of these heavyweights in the cast quite brings their best, since Ray has been a terrific director of actors in the past. The most grievous error here is messing with the original’s chillingly symmetrical ending. It might not be the director’s fault — the new, over-explained ending feels like something focus-grouped and demanded by studio executives — but it’s still on him. Like its predecessor, Secret in Their Eyes aims to be a tragic reflection on loss and regret and the shadow a single murder case casts over the lives of so many law-enforcement officers. The original movie gets there. This version just mistakes gloominess for profundity.

No Time to Die: His Last Mission

Titane: I Am Titanium