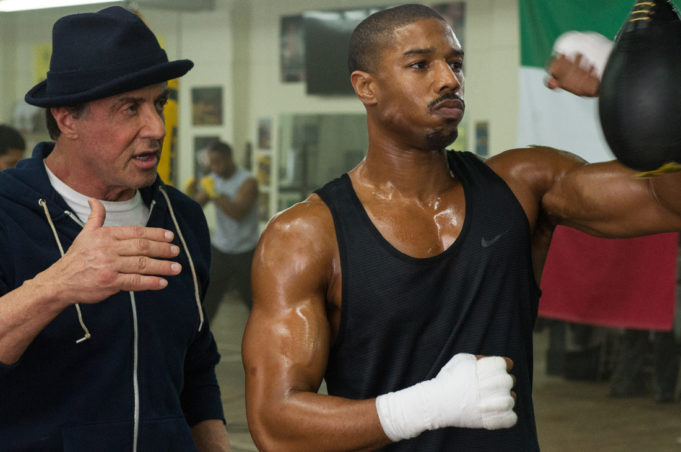 For whatever reason, I never got invested in the Rocky series. I haven’t even seen most of the sequels. So perhaps I’m being presumptuous when I say that Creed is an addition it can be proud of. Then again, I’m assuming most of the crowd around me at the preview screening saw more Rocky movies than me, and they seemed to appreciate the hell out of it too.

The hero is Adonis “Donnie” Johnson (Michael B. Jordan), the orphaned illegitimate son of the legendary Apollo Creed, who was adopted as a troubled kid by the heavyweight boxing champ’s widow (Phylicia Rashad). Despite her efforts to dissuade him, Donnie can’t resist the pull of the ring and walks away from a financial analyst job to train as a light heavyweight. The gyms in his native L.A. blackball him as a dilettante, so he travels to Philadelphia and seeks training from Apollo’s great nemesis and friend, Rocky Balboa (Sylvester Stallone).

This sticks to formulas of boxing movies that were established well before Rocky. Director Ryan Coogler and his co-writer Aaron Covington come up with plot developments that can be seen miles off: the romance between Donnie and a musician neighbor (Dear White People’s Tessa Thompson), the unlikely circumstances that give Donnie a sudden shot at the title, the revelation that Rocky is gravely ill. The callbacks to previous Rocky movies are just so much fan service, even if the sight of Rocky and Donnie hitting speed bags side by side is welcome. Coogler gives us lots of training montages, and while they’re well-executed, they’re nothing spectacular …

… until we get to Donnie’s first legitimate fight, against a Philly favorite son (Gabriel Rosadas), about midway through. Coogler films the entire two-round bout in a single, unbroken, “How the hell did he film that?” shot. His camera bobs and weaves in the ring with the fighters, moving to within a few inches from their faces before flitting to ringside and back again, showing Donnie’s progress as he lands himself in deep trouble before rallying. The director operates like Alfonso Cuarón with these tracking shots, pulling off another one in the runup to the title fight, but more importantly, he captures the atmosphere of a prizefight with such immediacy that you feel like you’re being spattered with the fighters’ blood and sweat.

Coogler directed Jordan in the powerful Fruitvale Station, and he knows what he has in this actor. It’s not just that the camera loves Jordan’s face. The actor vibrates here with anger and abandonment issues and an unquenchable will to win. Jordan’s star quality leaps off the screen, and he also happens to be in fearsome fighting trim here — simply watching him jump rope will pop your mouth open. Opposite such an electrifying presence, Stallone seems oddly rejuvenated given that he’s finally embracing the part of an old man. If the Rocky series were to move forward, it was always going to be this way, and you can’t help but feel it’s in capable hands.