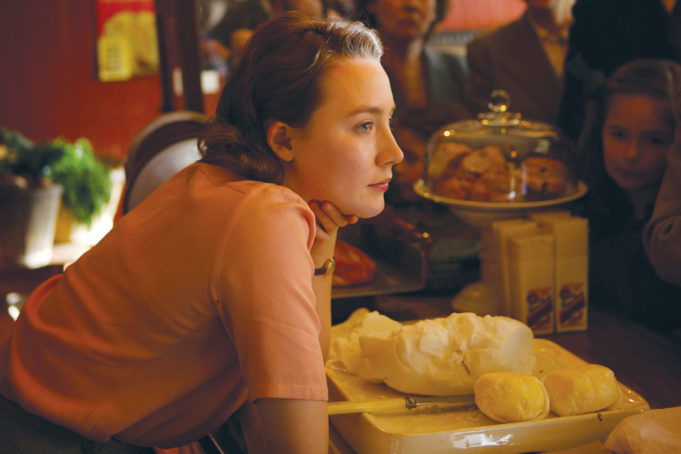 This is weird: John Crowley was originally supposed to direct the upcoming Carol, but he dropped out due to a scheduling conflict. Instead, the Irish filmmaker made another movie that, just like Carol, is set in 1952 in New York City and concerns a young woman who works in a department store. Well, it all worked out for us, because both the film that he abandoned and the film he left it for, Brooklyn, turned out really good. The latter movie expands to Tarrant County theaters this week, and while it’s hopelessly old-fashioned, sometimes that’s the best way to go.

Saoirse Ronan stars as a Eilis Lacey, a teenage Irish girl who can’t find work beyond a miserable part-time clerking job in her tiny hometown of Enniscorthy, County Wexford. With only her and her sister Rose (Fiona Glascott) to support their aging Mammy (Jane Brennan), it’s decided that Eilis — that name pronounced EY-lish — leave for a job and a spot in a boarding house all lined up in New York. Despite terrible bouts of homesickness, Eilis eventually starts to feel comfortable in the borough that’s an enclave of Irish and Italian immigrants.

By now you’ve likely heard the 20-year-old Ronan doing all sorts of foreign accents: English (Atonement), American (How I Live Now), or indeterminately European (The Grand Budapest Hotel). Here she finally gets to use her own accent for the role, and perhaps it’s no coincidence that she delivers her finest performance yet with it. Nothing traumatic or even all that out of the ordinary happens to Eilis, but Ronan is so alert and precisely calibrated here that she seems to register all the smallest changes in the winds around her and in her own moods. She shows a teasing sense of humor that she hasn’t been allowed to display before in the scenes where she flirts with a young Italian-American plumber named Tony (Emory Cohen, exuding his own raffish charm).

Ronan picks up all the vibes when a death in the family recalls Eilis to her hometown and she finds it suddenly foreign to her. The same goes for when a solid native lad (Domhnall Gleeson, for once looking dashing instead of geeky) shows interest in her and she’s plagued with indecision. From a girl who gets tongue-tied when Tony says he loves her, we see her grow into a self-possessed young woman who stands up to Enniscorthy’s malicious village gossip (Brid Brennan) back home, and this change is both remarkable and credible. This role has none of the histrionics we associate with Oscar-bait performances, and Ronan responds with a lapidary performance where every tiny cut seems perfectly judged.

Our lead actress gets plenty of support from the filmmakers. This is adapted from a novel by Colm Tóibín, and screenwriter Nick Hornby proves like he did in An Education that he’s uncommonly good he is at writing girls’ stories set in previous decades: On Eilis’ maiden voyage across the Atlantic, a fellow Irish passenger who’s already settled in America (Eva Birthistle) advises her, “Sometimes it’s nice to talk to people who don’t know your auntie.” Costume designer Odile Dicks-Mireaux draws a noticeable contrast between the earth tone-clad Irish and the brightly attired Americans, while cinematographer Yves Bélanger photographs 1950s America in enviably deep colors and manages to make even an empty lot in Long Island look like a corner of paradise.

As for Crowley, he’s back to his best. After a hellacious filmmaking debut in 2003 with the black comedy Intermission, he went to the U.K. and got sidetracked into failed experiments (Boy A) and tepid thrillers (Closed Circuit). Something in the old sod seems essential to bringing out his sense of craftsmanship. He takes this drama at an easy pace and finds telling and frequently funny details in the boarding house where Eilis lives with a bunch of other women and a puritanical landlady (Julie Walters).

Maybe his most notable achievement is the gentle closure that he brings this movie to. Of all the qualities a movie can have, lyricism is one of the hardest to achieve, and Eilis’ journey toward making herself a home in this strange new country is as beautifully realized as the resolution of a great symphony. At a time when our nation is, as always, conflicted about its immigrants, Brooklyn is a great chronicle of the pains and joys that accompany that great mass of people who yearn to call America their own.