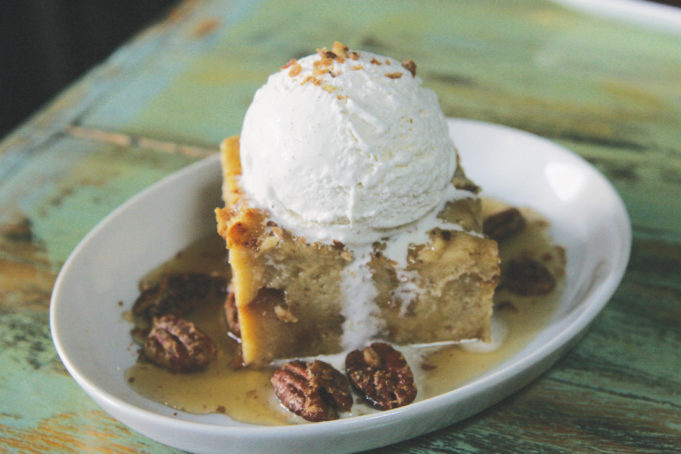 There have always been enough beer dives and burger joints around the intersection of West Berry Street and University Drive, ground zero for the TCU non-Greek social scene. What has been conspicuously absent has been a hip, slightly upscale bar and grill.

Attempting to fill this elusive niche is the newly opened Common Ground Grill & Tap, a restaurant, bar, and nightclub sharing a vacuous but cluttered room on the ground floor of a new student apartment block on University Drive. My recent visit revealed a place not without charm or potential, though the dining room was half-decorated, the staff half-trained, and the dining room half-full. The would-be hotspot had plenty of brow-raising oddities, from staff members’ personal phones charging on the bar to 12-ounce cans of Pabst Blue Ribbon priced at an astonishing $4 each. The friendly staff recommended cocktails without knowing their contents, and the bland Mumfordish music was punctuated by commercials. These foibles may yet iron themselves out with time and training. In the meantime, it’s fun to think about how much money you’d save on the wine lists’ Yellow Tail Shiraz by picking up a bottle at the 7-Eleven next door and paying a corking fee.

Common Ground is on more solid footing in the kitchen, where the menu designed by Chef David Hollister (Dagwood’s Grinders and Growlers, Dagwood’s Fire Grill Tap) hits more than it misses.

We started with a solid appetizer of Akaushi beef meatballs, generously portioned and plenty to share, crowned with crispy fried onions and glazed with brown sugar and soy sauce. A more curious selection was the plate of crispy chicken puffs, a trio of miniature empanadas garnished with what the menu claimed was chimichurri sauce but which was, in fact, pimiento cheese. We all have fond childhood memories of squishy pimiento cheese sandwiches pouched in cellophane, but it can be an unsettling experience to find it splayed, uninvited, on a chicken empanada. The chicken, however, was nicely seasoned, and the crust was tender and flaky.

A wedge salad arrived next, but the traditional quarter of an iceberg head had been replaced with an entire bulb of bibb lettuce, garnished with bacon and sun-dried tomatoes, and drenched in a pungent blue cheese dressing. Hollister’s reputation for employing quality ingredients is well deserved, and his salads in particular showcase the thoughtfulness of his selections.

As an experiment, I ordered the pan-seared shrimp entrée with chimichurri to see if my earlier pimiento cheese experience had been a one-off — it had not. But as the pimiento cheese had been unwelcome on my empanadas, the spread found purchase in my creamy polenta, its richness cut somewhat by the addition of goat cheese and sunflower sprouts. The shrimp were seared perfectly.

My guest ordered a filet of cod crusted with pecans, served on a bead of quinoa and zucchini, and topped with a green chile Bearnaise. I found the fish overcooked and the pecans lacking flavor. The entrée was reminiscent of another childhood memory best left in the past: the breaded whitefish from Luby’s. On the other hand, the quinoa was prepared nicely, and the zucchini were unseasonably tender. The Bearnaise lacked any green chile heat but was well-seasoned. The dish would be improved with a fish better suited to such an aggressive preparation — perhaps a Chilean sea bass to pair with the Chilean zucchini.

While finishing our entrées around 10 p.m., we found the dining room around us gradually transitioning into discotheque mode, the ambience shifting pointedly with the addition of colored lights and bland techno. Despite assurances from our server, my guest and I suspected the scene change was a clear attempt to hurry us out the door –– we defiantly ordered dessert.

The kitchen offers two desserts, but you need to remember only one: Order the brioche bread pudding with maple pecans and dates. You can skip the forgettable hockey puck of brandy cake.

If Common Ground isn’t quite the elevated nightspot you’ve been waiting for, the makings of a good gastropub are evident. Late-night diners would appreciate a spot for a decent meal and a quiet drink close to home. The concurrent nightclub, unfortunately, is at odds with aspects of the place that are actually working.