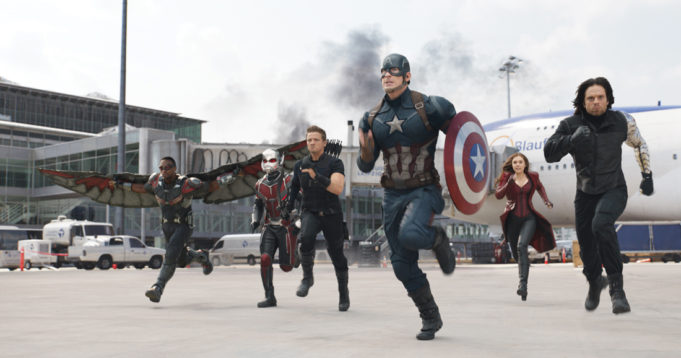 The hype over Captain America: Civil War has been washing over us from the fan conventions and the parts of Europe where the movie has already opened. People who snagged an early look at this superhero flick are saying that it’s the best movie in the entire Avengers series. Now I’m here to tell you that it lives up to the hype, even if I had to consider the question for a while.

After an Avengers’ rescue mission in Nigeria goes wrong and results in yet more innocent bystanders being killed, the new U.S. Secretary of State (William Hurt) lays down an ultimatum from the world to the superheroes: Submit to U.N. oversight, retire, or be arrested. In a bizarre yet logical twist, the egocentric maverick Tony Stark (Robert Downey Jr.) is the one pushing for limits on the group’s power, while the obedient soldier Steve Rogers (Chris Evans) leads the “no” camp. When the captain’s fugitive best friend Bucky Barnes (Sebastian Stan) is blamed for a deadly terrorist bombing, the Avengers are forced to choose up sides, including newcomers Spider-Man (Tom Holland) and Black Panther (Chadwick Boseman).

This is by the team of Anthony and Joe Russo, the brothers from a TV background who did such sterling work on Captain America: The Winter Soldier. Simply the way they handle the task of fitting 12 — 12! — superheroes into one movie without losing track or making anyone feel surplus to requirements is worthy of praise. The five-minute scene with Stark recruiting Peter Parker in his bedroom is a better origin story for Spider-Man than either of the films devoted to that purpose. In limited screen time, the movie gets more mileage out of Ant-Man (Paul Rudd) than his entire starring vehicle did. A late revelation about Tony’s parents lends him an emotional weight that the character hasn’t had since the very first Iron Man. The serious issues about how a superpower should behave in the world impart urgency, more so because both Tony and Steve are correct in their reasoning. The straight edge that Evans brings to the character has often served as a foil to the more flamboyant types around him, but here he’s a valuable steadying influence amid the moral ambiguity.

Just as notable is what isn’t here. There’s no dead spots like the other Avengers movies had, no pointless dream sequences, no dreary chatter about Asgard’s politics or those damned Infinity Stones. This 146-minute movie may be packed, but it’s also lean and agile. Instead of a one-dimensional supervillain dreaming of world conquest, there’s a life-sized guy (Daniel Brühl) who knows his limits and acts out of understandable motivations, which helps place the film on a more human scale. His story is mirrored in Black Panther’s, a young African king out for revenge after his father is killed in the bombing, which makes for a worthy addition to this capacious saga.

This isn’t to say that everything works. I’m still not devoted to the undying friendship between Cap and Bucky that provides the fulcrum of this plot, and at some point some of these superheroes will have to die, not just to clear away excess characters but to provide a sense that wars have casualties and the people fighting them sometimes have to make sacrifices. (The Mark Millar comic book does that, but adapting writers Christopher Markus and Stephen McFeely won’t take the plunge, even though not all the characters emerge in one piece.) Nevertheless, the balance that Captain America: Civil War strikes between action, character, emotion, humor, and intellectual debate makes this a compendium of all the best things the Marvel movies have had to offer.