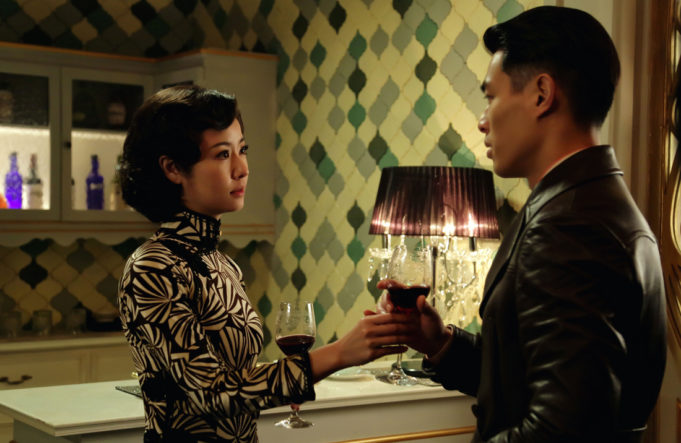 By now I’ve seen horror films worth taking seriously from many different corners of eastern Asia, but mainland China is a notable exception. It’s not for lack of trying, either. Chinese movies are full of ghosts and witches and magical beings. Yet they aren’t truly scary the way that films from Japan or even Thailand and the Philippines have been. I’m not sure whether censorship is the reason for this or whether there’s some other factor at work. What I know is that the latest of these, Phantom of the Theatre, only extends the losing streak as it expands to North Texas this week.

Set in 1930s Shanghai, the film stars Tony Yang as Gu Weibang, a young man who has returned from studying filmmaking in France to make a horror film in his native country. He snags gorgeous upcoming ingenue Meng Si-Fan (Ruby Lin, who is no relation to me) as the lead actress and plans to shoot the movie in an abandoned theater, despite people claiming that the place is haunted. He’s forced to take the claims seriously on the first day of shooting, when his male lead (Wu Xu Dong) ruins a take by spontaneously combusting in front of everybody.

The film is beautiful when it’s evoking the glitz of the movie industry in a bygone era, and older Chinese viewers who are nostalgic for the time period will undoubtedly find this to be a nice trip. However, director Yip Wai-Man too often indulges in special effects that are self-consciously cool rather than scary, as when Meng sees her reflection in a mirror burning into a pile of embers. The CGI may be advanced for China, but it’s nothing that you won’t see in the third-rate American horror flicks that litter our multiplexes.

The movie really flies off the rails in the last half hour, as it gets into Meng’s secret identity, a limp romance between her and her besotted director, a scientific explanation from Gu’s forensic pathologist girlfriend (Huang Huan) that makes no sense, and a puppet master-like presence (Jing Gang Shan) who’s been secretly living inside the theater for 13 years. (The spirit of Gaston Leroux hangs heavy over this. Maybe the movie should have been titled The Phantom of the Peking Opera.) This being a Chinese movie, there’s also a syrupy pop ballad over the ending that doesn’t fit the story. Asian horror fans may be intrigued by the premise of this, but they should resist.