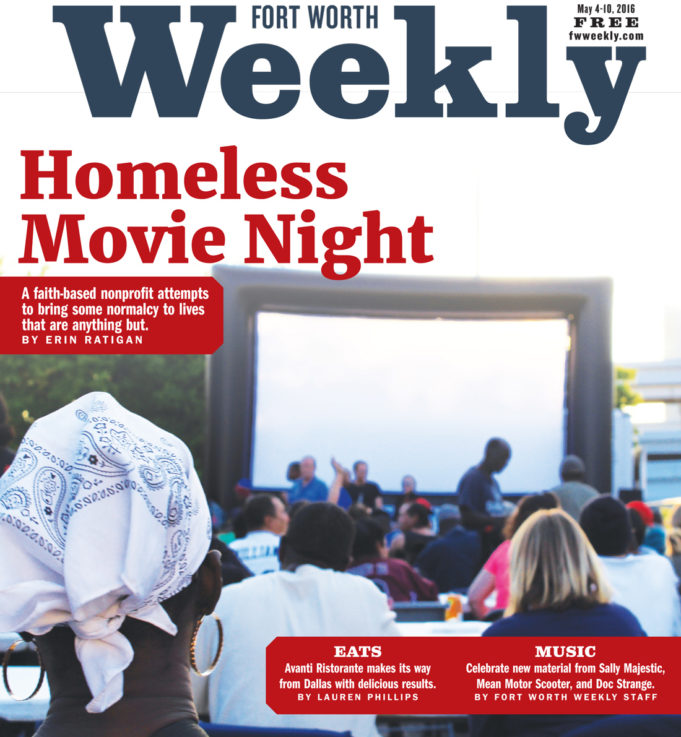 Kevin McFarland has been living on the streets for three years. He’s tried shelters but doesn’t like them. When he’s not working as a day laborer, he spends most of his time taking care of Monique, his pregnant fiancée, who is also homeless.

He and Monique set up residence on East Lancaster Avenue, an area known as Fort Worth’s “homeless corridor.” On most days, these streets just east of downtown are quiet enough. But on one recent cool spring evening, the promise of food and entertainment brought the couple to the Transfer Center, a sprawling converted warehouse that’s home to more than 14 different homeless outreach programs, where a giant inflatable movie screen towered over tables overflowing with cookies, hot dogs, and popcorn.

About 200 other homeless people joined McFarland and Monique for a screening of Courageous, a 2011 film in which men and women pledge to become better Christians in the face of personal adversity.

The event was the second in a new monthly series hosted by When We Love, one of the center’s tenants. Just as many people showed up for the first movie night, featuring a screening of the 2006 Christian football drama Facing the Giants.

“The first one was so successful, we booked the next six months,” said Gary Wilkerson, founder of When We Love.

Movie nights are a unique and more personal way of reaching out to the homeless, he said, as most area shelters might have one TV and not everyone may have access to it.

By 6:30 p.m., the tables and chairs lining the Transfer Center’s parking lot were filled. Seated near the loudspeakers at the back of the lot, McFarland spoke candidly about his experiences on the streets. If he had to tell people one thing about homelessness, he would emphasize how stressful it is.

“I see stressed people out here every day,” he said. “They get in fights. They steal.”

To be in his situation, he said, you have to stay on guard at all times, making sure not to get involved with any unsavory characters. His greatest struggle is taking care of his fiancée. She has seizures, and McFarland said it’s his job to see she gets enough rest.

It is one thing to be homeless and alone. But having a pregnant woman with him is something McFarland said has led to several unpleasant experiences with other homeless people –– some of them, McFarland said, have been spreading rumors about her.

“At first they were all friendly, but … they don’t like the fact that we’re together, for whatever reason,” he said.

When rumors spread, he said he tries not to get involved with them or become violent.

“Homeless people … we shouldn’t discriminate or hate each other,” he said.

Wilkerson thought up the idea for a movie night while watching a film with his kids. What made it so appealing, he said, is that it could serve as a normalizing experience for people who can no longer spend a night out with friends.

“We were tying to do things to make them feel like life was a little more normal,” he said.

The idea also fit with the Transfer Center’s focus on giving the homeless both what they want and what they need. This unique approach to outreach seemed obvious to Wilkerson and Cyndi Bunch, the founder of another center tenant, Philip’s Wish, since food and shelter are not all that’s needed to make life worth living.

Bunch said their goal is to provide support and help rebuild people’s lives.

“We’re just people that want to help people,” she said.

Since the beginning of 2016, the Transfer Center has served 2,980 warm meals and distributed 450 sleeping bags and 680 personal hygiene kits. In addition to helping the homeless find work and housing, the center provides furniture, clothing, food, and other essentials to make each new apartment a home.

Bunch said that level of care is often what makes someone’s life livable, not just survivable. Wilkerson agreed, adding that when people don’t like their new housing, they often return to the streets.

The coalition blames the increase on a few factors, including: unseasonable warm weather on “Count Night,” when coalition members attempt a headcount of the city’s homeless; improved reconnaissance; and a decrease in the number of homeless staying in emergency shelters. The unsheltered homeless questioned for the report said their inability to cover housing costs led to them living on the streets.

While 58 percent of homeless people in Tarrant County are African-American, according to the report, the unsheltered population is predominantly white.

Most of these unsheltered homeless live on East Lancaster.

On average, Wilkerson said the Transfer Center sees 30 to 40 people each day, looking for housing or other long-term assistance. Such services, he said, are often not provided at emergency shelters.

Ron, who’s been homeless for eight months, is a regular fixture at the Transfer Center, so much so that one caseworker says, “He runs this place.”

Ron, like McFarland, has had his fair share of run-ins with unsavory characters up and down East Lancaster –– both homeless and non-homeless. When it comes to the public, Ron said he tries not to let them get to him.

“The ones that have problems, you pray for them and move on,” he said. “You have to know when and when not to come to certain people.”

This likely stems from his Christian beliefs, which guide him through each day, he said. Though his mother never knew about his being homeless, Ron said he wishes he could tell her how he’s coping.

“I would tell her this is what I do now –– that I help anybody that I can help,” he said. “That’s what God blessed me to do. When you help others, then God blesses you.”

While the Transfer Center is primarily made up of faith-based organizations, Wilkerson said their aim is to lead by example rather than pushing their beliefs on others.

“We’re not bible thumpers,” he said, smiling. “We’re not preaching at them. We’re Christians, but that doesn’t mean they are.”

After the first movie night, Wilkerson said several people asked to be prayed for or just came in to talk. One prayer seeker was an atheist, Wilkerson remembered. When that happens, he said, the center’s primary focus is establishing a relationship with people. That way, the organization can really make a difference.

As the sun began to set over downtown Fort Worth, the line for food grew longer, and volunteers cranked up the loudspeakers, playing contemporary gospel music. Waiting her turn in line, Barbara Cruse closed her eyes and raised her hands in praise, singing to every song as though she knew it by heart. Then she started dancing.

Cruse said she doesn’t let being homeless get in the way of her happiness.