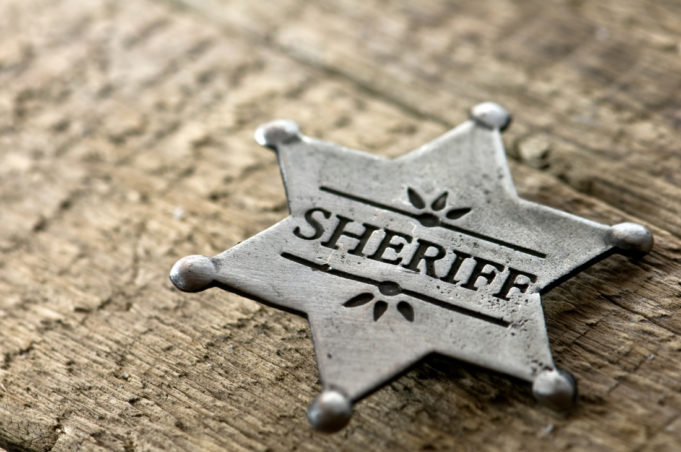 We wanted so much to be able to tell you who your sheriff is today. Alas, votes cast in the runoff election between incumbent Sheriff Dee Anderson and challenger Bill Waybourn were still being tabulated at press time. This means we can’t name the winner here. But, as you know, the choice came down to two distinctly different men: Anderson, the low-profile, bare-headed incumbent wearing penny loafers and a sports coat while he keeps the jail running smoothly, and Waybourn, the gun-totin’, cowboy-hatted, cowboy-booted, ticket-writing cop who says Anderson has lost touch with constituents and his morale-depleted staff.

The rap on Anderson went like this: The sheriff hasn’t had any scandals, but he hasn’t done much, either. He spent little time on the streets as a cop before becoming sheriff. His support base isn’t energized like Waybourn’s. Anderson rarely gets out in public (unless he’s following his true passion, officiating high school football games).

“It’s like he doesn’t even exist,” a Waybourn supporter said before the election. “The sheriff of an urban county needs to have a presence in the public. Anderson hasn’t done that. The sheriff is conspicuously absent about anything to do with the county.”

The rap on Waybourn went like this: The recently retired Dalworthington Gardens police chief oversaw a little speed-trap town on the outskirts of Arlington for three decades. Big whoop. He’s all hat and no cattle. He might have the bushy mustache, a pair of Tony Lamas, a Resistol hat, and a pistol, but can he balance a $120 million budget and lead 1,600 employees? Or is his main talent citing people going 2 mph over the speed limit?

Most of the law enforcement groups around these parts sided with Waybourn, including the Tarrant County Law Enforcement Association and the Fort Worth Police Officers Association. Action movie hero Chuck Norris endorsed him. Taya Kyle, whose late husband Chris Kyle inspired Clint Eastwood’s American Sniper, served on Waybourn’s campaign. Coyote-killing former Gov. Rick Perry endorsed him. When it came to hardcore patriots who like to kick ass, Waybourn had everyone but the ghost of John Wayne on his side.

What has Anderson done? Well, the jail passes inspection every year. As for being an action hero, uh, Anderson cast some pretty steely glances in the direction of affluenza kid Ethan Couch during that media circus of a trial. So there’s that.

One thing’s for certain: Either sheriff candidate will be better than the sorry excuses for lawmen we had around here prior to Anderson showing up. Anyone remember David Williams, the Jesus-pushing, helicopter-buying, machine-gun lovin’ goofball who eventually turned into Howard Hughes, hiding in his office and probably saving his own urine in Hellman’s Mayonnaise jars? Or Don Carpenter, the ’backy spittin’ Napoleonic sheriff with the big cowboy hat who didn’t see anything wrong with gifting people guns taken from the property room?

Nope, we’ll take Anderson or Waybourn over those hags. We just wish we could tell you which one we’ll be taking. Prediction: Anderson wins by a nose.

UPDATE: In hindsight, pulling a prediction out of our yin-yangs right before press time was ill advised. Static foolishly predicted Sheriff Dee Anderson would win by a nose in the Republican run-off election against Bill Waybourn. Instead, Waybourn won by a pointy boot.

We’d like to make a new prediction, this one foolproof –– Waybourn will defeat any Libertarian challenger he meets in November and then take over as sheriff on January 1, 2017. Anderson, after 16 years in office, will go home and become more acquainted with whittling and porch swings.

Most local law enforcement associations endorsed Waybourn, and the new sheriff is already paying them back, at least verbally. Speaking with a FOX 4 News reporter shortly after last night’s victory, Waybourn said he will “visit with the staff, the entire staff” and recruit people who want to stay there and work there, and “create an environment that will be competitive with our counterparts and counter agencies to make sure that they stay there, and they become loyal, dedicated employees.”

Raises for everybody! Woo hoo!

The reporter wondered what Waybourn would say if he heard from Anderson, and the new sheriff showed class.

“I would say that I thank him for his service, and I hope for a great transition,” Waybourn said.

We almost hate to admit this … it reveals superficiality on our part … and it’s kind of silly … but … dammit, it will be nice to have a sheriff who wears boots and a cowboy hat again. Good luck to Anderson, and good luck to Waybourn, and may the jail house be run with care and efficiency from now until the end of days.

Thinking Critically about Racism in Texas

The Party of “Abortion” in Texas