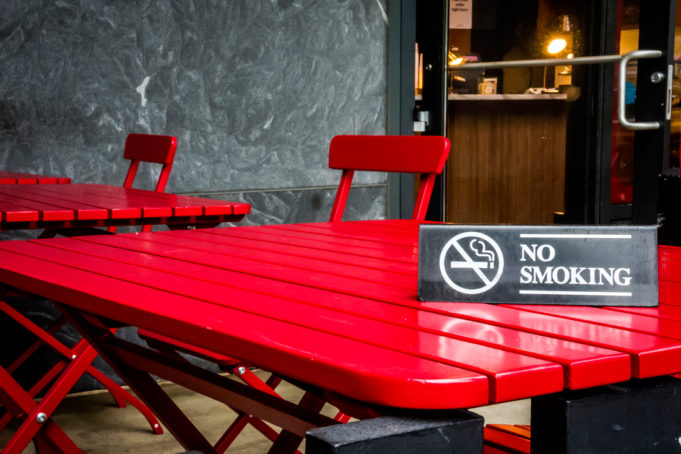 A local group is going after all you people on bar patios sucking on cancer sticks and poisoning everyone with your second-hand smoke. City officials banned smoking in restaurants in 2008 but exempted outdoor patios and bars. Now those remaining tobacco-friendly areas might be on the hit list soon. Spearheading an effort to widen the ban’s scope is Smoke-Free Fort Worth, a nonprofit coalition of the American Heart Association, American Lung Association, American Cancer Society, and smaller groups and businesses.

“There’s really no reason for” those fatalities, he said. “People that want to smoke don’t have to endanger others.”

Regardless, Koch and his network of volunteers are informing the public about the proposed smoking ban through events like Friday on the Green while signing up supporters via smokefreefw.org. The next step is to ask City Council to adopt a new, stricter smoking ordinance.

The idea of telling private businesses not to allow smoking doesn’t sit well with some locals. Perry Tong, co-owner of Pop’s Safari Room, a cigar bar in the West 7th corridor, says he’s been battling groups like Smoke-Free Fort Worth for years.

“Certain people want to tell you how to live and what to do and when to do it,” he said.

Tong worries how the proposed regulations might affect his and other tobacco-friendly businesses.

“I just want them to leave people alone who want to enjoy” smoking, he said.

His concern is simple: If patrons can’t get their nicotine fix at their favorite watering hole, they will take their cigs (and money) elsewhere.

However, new findings from the TCU Center for Urban Studies, a research initiative within the university’s AddRan College of Liberal Arts, recently concluded that the economic impact on Texas bars and restaurants after passed smoking bans was statistically insignificant. The first smoking ban in Texas passed in Rollingwood (near Austin) in 2001. The following year, El Paso followed suit. To find out if business in cities with comprehensive smoking bans saw a downturn in revenue from the sale of booze, TCU professor Silda Nikaj and two Ph.D. colleagues runched numbers. Lots and lots of numbers.

“What we found [on average] is that after a smoking ban was passed, there was a negative 1 percent effect on alcohol tax revenues, which is not significant and basically zero,” she said.

“Overall, our research is suggesting that if you are considering banning smoking and are worried that it will affect business at bars and restaurants, it won’t,” she said. “The reason is that you can still smoke outside. You may not be able to smoke on the patio, but you can smoke on the parking lot or elsewhere.”

Tong disagrees with Nikaj’s rosy figures, claiming that a friend who owns a barbecue restaurant in town complained of losing 15 percent of revenues after the smoking ban went into effect.

Nikaj’s findings will be available digitally next week at nber.org, the website of the Massachusetts-based economic research nonprofit National Bureau of Economic Research.

Is it possible that the case involving two TCU maintenance workers duking it out isn’t a top priority to the Fort Worth Police Department?

The case is pending, said police Sgt. Marc Povero. “The detective is trying to contact the suspect for a statement.”

We’re not professional police detectives around here, but we’d track down the suspect by visiting his work, or by going to his house, or by just calling him on the phone. If you’ll recall, a police report from earlier this month indicated the maintenance workers had been feuding for more than a year and that their supervisor encouraged them to settle things with a fistfight at Trinity Park. One of the men later complained to police and to school officials.

Two weeks later, nothing. No swift justice. No heads rolling.

Admittedly, the fight is a non-story. Sure, the news media clamored all over it. People like hearing about weird and funny stuff even when it doesn’t matter. We are curious creatures. Gossipmongers by nature. Did the supervisor get in trouble? Was anyone hurt? Most importantly, why are we taxpayers footing the salaries of police officers who clearly have better things to do than satisfy our taste for juicy gossip? The nerve.