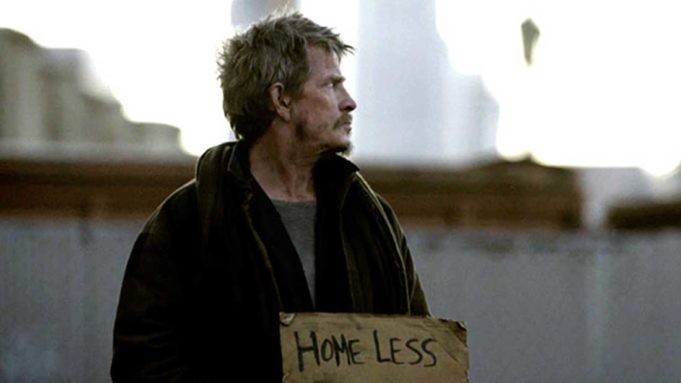 You should always be suspicious of homeless dramas that star Oscar-nominated Hollywood actors. There are so many different ways that such movies can go wrong, prettifying the squalor or giving the actors phony Oscar-bait speeches or reducing the challenges of homelessness to a series of easily digestible dramatic beats. Cardboard Boxer, which opens this week at the AMC Grapevine Mills, does none of these things. Instead, it goes wrong in such an unforgivably cheap way that no actors could have saved it.

Thomas Haden Church stars as Willie, a guy living on the streets of Los Angeles amid a community of other unfortunates like himself. He gets the nickname “Cardboard Boxer” from a loathsome rich kid (Rhys Wakefield) who gives Willie $50 to fight other homeless guys so that he can turn himself into the Don King of illegal bum fights, collecting the vig when his 1% buddies wager on the outcome. For Willie, the money is enough to pay for a night in a cheap hotel and a meal the next morning, but he fixes his mind on something nobler when he finds in the trash a burned but still readable diary by a little girl whose life is bad enough to make even Willie’s look enviable.

First-time writer-director Knate Lee previously worked as a producer on some of the movies in the Jackass series. It’s nice that he wants to parlay his success into a film like this, but he gives the dimwitted Willie so little detail that the main character comes off as a cipher, leaving Church with lots of screen time and not much to play. Lee’s script is full of things like the scene when Willie gives $5 to a prostitute (Macy Gray) just to hold him in the port-a-john that she works out of. If that strikes you as rankly sentimental, just wait till you get to the revelation at the very end, which depends on two outrageous coincidences to deliver Willie the redemption that he’s seeking. This is so fraudulent, it’ll make your skin crawl.

Too bad, because some of the supporting actors are well-cast. Wakefield, previously seen as a polite killer in The Purge, commits to the awfulness of his roles, while his fellow Australian Boyd Holbrook contributes a solid turn as a legless war veteran who befriends Willie. Terrence Howard is a cooling presence as a sympathetic cabbie, at least until the taxi driver finds out about Willie’s boxing sidelight. They can’t overcome the putridity of the drama that they’re stuck in, though. Unlike its characters, this movie deserves to be consigned to a cardboard box on the street.