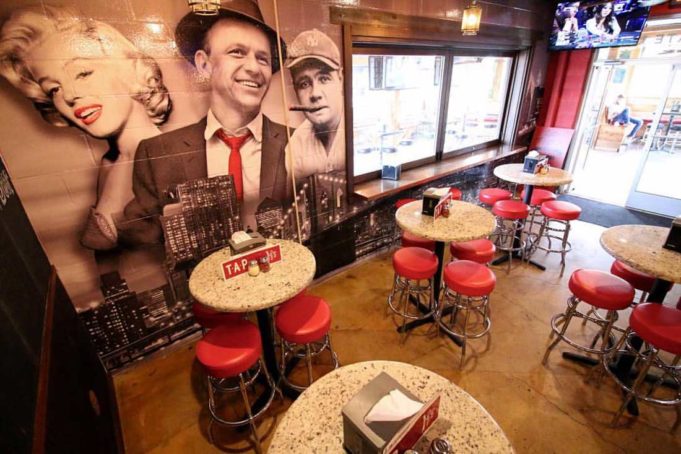 The American Pub just opened in May, but it’s already changed its name to Fort Worth Pizzeria (2800 Bledsoe St, Ste 200, 817-439-9443). I can’t imagine why it would bounce from one generic name to another, but I guess the new handle does give people a better idea of what kind of food it serves. I mean, they don’t serve “American” pizza. My problem with the change is that the word “pub” was omitted, and that word probably better describes the tiny West 7th eatery/drinkery better than pizzeria.

It’s a party-patio-bar first and foremost. The restaurant/bar is located on the south end of the West 7th development, next to Trophy Ranch and within staggering distance of Rodeo Goat and half a dozen other bars. The outside looks like an attractive, comfortable, airy lounge to land for a drink or seven. On a recent lunch visit, a few TVs out there all played muted soap operas.

My favorite feature of the place is its exterior food window where you can buy pizza by the slice until 4am on weekends. So if I were the sort of person who hangs out in West 7th, and I’m not, that would be my last stop on what could be a pretty mean bender through the land of barbed-wire tattoos and Ed Hardy shirts. I imagine the map of my binge would look like a 5-year-old trying to solve a McDonald’s placemat maze that has a slice of pizza in the middle.

To be honest, I had never been to American Pub before this week, so I guess I’ll never get to go. American Pub, aside from slinging late-night pizza, wasn’t the sort of joint that I thought rose to the level of the Chow, Baby treatment. The menu looked like a cursory offering meant to soak up booze – a courtesy more than a passion.

The interior of the dining room is dominated by the bar, with just a few tables and tall stools parked in front of a mural of Frank Sinatra, Marilyn Monroe, and Babe Ruth. Some ’80s hair metal played loudly over the speakers, just in case my guest and I forgot we were at a West 7th party bar. (If you watch The Young and the Restless while listening to Dio’s “Holy Diver,” the two eventually sync up for a confusing yet compelling story.)

Our charming, attentive server recommended we start with some chicken wings ($7 for half a dozen) with a dry rub. Though I found the spice combination a little cloying, mostly because the brown sugar drowned out everything else, my guest said they were some of the best he’s ever had.

For entrées, there are only six specialty pizzas, but you can build your own from a long list of ingredients. We opted for a decadent pie called The American ($15 for a 10-inch), which I’m assuming is either a holdover or an homage to the bar’s former incarnation. That pizza was absolutely loaded with pepperoni, Italian sausage, meatballs, a smoky, flavorful pulled pork, bacon, red onion, mushrooms, and jalapeños. It’s minimalist counterpart, the New York White Pizza ($11 for a 10-inch), was Spartan by comparison, although that’s probably what made the garlicky, cheesy pie with crushed red pepper and housemade ricotta cheese such a good companion to its gaudier menu-mate.

I liked the “new” pizzeria, though I bet I’d like it a lot more after a few adult beverages. Maybe they should change the name to: Come Back When You’ve Had a Few.