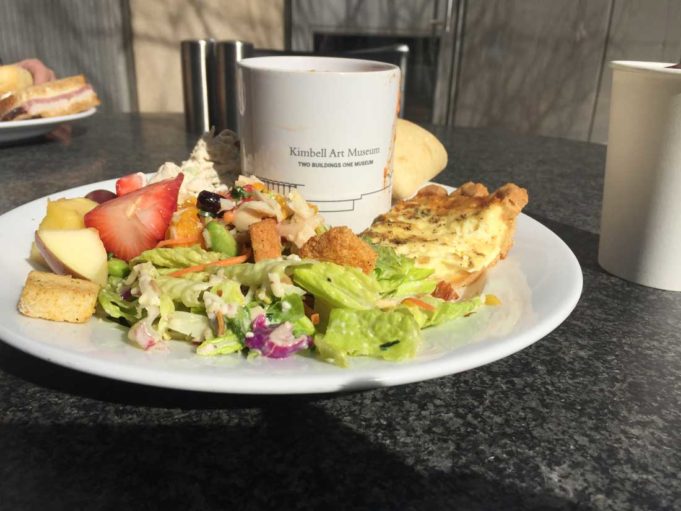 As I stood in the winding line to get into the Buffet Restaurant at the Kimbell Art Museum of Fort Worth, I wondered whether my table would face Henry Raeburn’s oil on canvas masterpiece, “The Allen Brothers.” Maybe I’d be oriented toward any number of the attractive Roman mosaics hung on the walls of the café’s breathtaking dining room, with its gleaming barrel-vaulted concrete ceilings and cascades of natural light.

As luck would have it, the first available table was on the place’s bright, cozy patio, and my guest and I were treated to a view of the pristine bronze derriere of Aristide Maillol’s L’Air. No matter. North Texas was on the sunny, warm end of the teeter-tottering weather, and I’ve never been one to shy away from a polished black ass.

The Modern Art Museum of Fort Worth’s kitchen seems to grab most of the museum-food headlines. And deservedly so. Chef Dena Peterson built a foodie juggernaut, and Denise Shavandy has continued that tradition, albeit with a more curry-tinged lilt.

I would posit, based solely on the bang-for-buck metric, the Kimbell is the better value. Its buffet ranges from $10 to $12.50. Though it’s not an all-you-can-eat affair, diners are welcome to pile as much salad, quiche, and whatever else onto their plates as they want. Since most of the café’s patrons have the appetite of a yellow-throated sparrow, the kitchen is likely to never run out of food.

Like its more acclaimed sister museum, the Kimbell has recently had a change at the top of its culinary food chain. Longtime head-honcho Shelby Schafer recently retired, and former Swiss Pastry Shop chef Peter Kreidler was handed the spatula. He was the brains behind the Pastry Shop’s critically lauded, though recently 86’d, dinner menu.

Schafer is a hard act to follow. Her housemade soups, quiches, and salads were the pinnacle of ladies-who-lunch fare. But if my recent visit is any indication, the little buffet is in good, nay, great hands.

Before I get to the review-y part of this already hilarious write-up, I’d like to issue a public service announcement on behalf of the Kimbell: When there’s obviously a huge line of people waiting to get into the dining room, because, say, there’s an especially popular exhibition (Monet: The Early Years runs through January 29), maybe that’s not the time for a languid three-hour lunch. Half of the people at tables who were already finished when I arrived were still camped out when I left.

There’s zero drop-off from Schafer to Kreidler, though I couldn’t glean any discernable departure that Kreidler has stamped onto the new menu. Every morsel of his menu of light bites was expertly seasoned, balanced, and delicious. The bill of fare was the usual upscale museum café grub: quiche, sandwiches, salads, fruit. The highlights were the sharply spiced roasted garlic-pecan vinaigrette on the salad greens, the luxuriously creamy tomato-basil soup, and the light-as-pillow-foam quiche with a crumbling, buttery crust.

As if being surrounded by stunning art in an architectural marvel while eating great, healthy-ish cuisine wasn’t treat enough, the polite, energetic staff made my day. Everyone from the witty pistol of a hostess to the helpful busser was the picture of pleasant professionalism. Even the people in the buffet line around us were in high spirits.

It won’t take much convincing to get me back into that dining room. I’m excited to see how the menu will evolve under Kreidler. And there really isn’t a bad seat in the house.