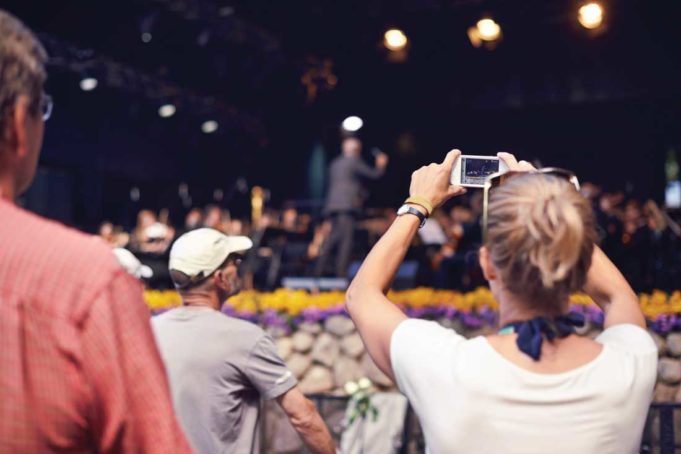 Only minutes before the start of a chamber music program at the Modern Art Museum of Fort Worth, I chatted up a middle-aged married couple who happened to perch in front of me.

“I heard the symphony is offering $20 vouchers for new concertgoers,” I said, describing the Fort Worth Symphony Orchestra’s new promotion.

“Well, we’ll know who’s clapping between movements,” the husband said, jokingly referring to a common faux pas the unwashed have of applauding before an entire work is finished. “But, at least they’re showing up.”

The well-intentioned quip highlighted two truths about Fort Worth’s classical music scene: 1.) Concertgoers tend to consist of the same set of people, generally those between 60 and 80, and 2.) Local performing arts groups are trying to change that trend by seeking new, younger audiences.

I volunteer as a board member for the Chamber Music Society of Fort Worth, which puts on classical performances by small ensembles. A frequent topic at our meetings is how to attract younger audiences. The average age of our concertgoers is easily over 60. Like most arts groups, we offer student discounts. Two years ago, we started a family discount program. (Individual tickets are normally $35.) More recently, we’ve opened Twitter and Instagram accounts.

According to a 2012 study by the National Endowment for the Arts, between 2008 and 2012, adults ages 35 to 54 cut back on attending classical music concerts, while people 65 and older increased participation.

So why is it so hard to attract younger concertgoers? For a possible clue, I reached out to Michelle Lowell, a 21-year-old TCU student who volunteers with CMSFW. She thinks 20- to 30-year-olds don’t attend classical music concerts in larger numbers because they don’t know about them.

“Most of the ways I get information about events is through social media or advertisements around campus,” she said. “I’ve never seen [ads] for classical music concerts. I think millennials just aren’t aware of all the different [forms] of classical music events” out there.

Some stereotypes about classical music persist for a reason. Last summer, I took my 9-year-old son to a concert presented by a well-funded performing arts group. As children often do, Isaac whispered that he needed to use the little boy’s room partway through the first half of the program. No biggie, I thought. We quietly traipsed toward the far end of Ed Landreth Hall only to be stopped by a volunteer usher. We were told that the door would not be opened until intermission. I resisted the urge to explain that concert hall doors are designed not to creak when opened and that any pianist worth his or her salt shouldn’t be bothered by a distant, barely audible sound. We submissively returned to our seats.

Some performing arts organizations here are looking to fight such experiences. Fort Worth Opera has engaged millennials and the wider community for as long as I can remember. Opera Shots is a low-key concert series that trades Bass Performance Hall for local pubs and wine bars. Listeners are free to listen, engage, or openly chat as professional singers belt out famous arias.

Ryan Lathan, communications director for Fort Worth Opera, confirmed my assumption that the aim of the program is to reach younger audiences. “The arias and duets performed might be considered ‘high art,’ but they are presented in a comfortable, down-to-earth manner,” he said. Having a younger audience is particularly important to the opera company, which prides itself on its willingness to give audiences newer repertoire.

The number of Opera Shots each year has steadily grown, he added. The most recent, held at Acre Distillery last month, drew more than 150 folks.

The venerable Van Cliburn Foundation has a newish Sessions series at The Live Oak Music Hall that presents young, hip chamber groups and artists. In private chats with directors from both music groups, I hear a common theme: Classical music needs to adapt and be accessible if it is going to have a future.

Community concerts are another way Fort Worth’s performing arts groups engage the general public, including millennials and thirtysomethings. For as long as I’ve worked at the Weekly, the readers’ choice for Best Classical Performance has been the Fort Worth Symphony Orchestra’s Concerts in the Garden. The summer concert series reaches around 50,000 folks every summer, according to the symphony.

I mention these events to highlight a couple of things, chiefly that classical music, as a genre, does have broad appeal when placed in the right environment. The chamber music group I’m a part of recently brought a string quartet to Wild Acre Brewing Company for a concert billed as Beer, Beards, and Beethoven, with a flyer depicting Ludwig dressed as a bearded hipster holding a foaming stein of beer. The event sold out, largely thanks to throngs of curious twenty- and thirtysomethings.

Should Fort Worth’s performing arts groups double down on these events? Personally, I like having a reason to get dressed up and attend a formal concert, even if I’m going to be one of the younger people of the audience. I think there’s room, and a need, for both types of events.

Editor’s note: This piece has been edited from the print version to reflect correct information.