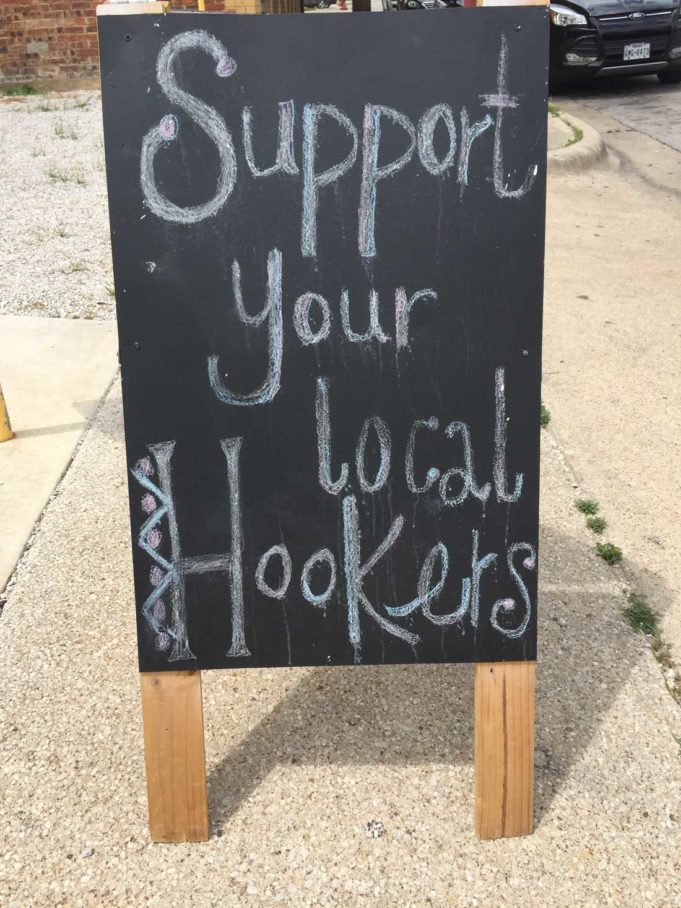 Out of context, the chalkboard sign on the West Exchange Street sidewalk that read, “Support your local Hooker’s,” might seem scandalous. The message was clearly meant to evoke a coy giggle from passersby who would then feel compelled to dine at Hooker’s Grill (213 W Exchange St, 817-773-8273), if for no other reason than to reward the newly opened burger shack for the cheap laugh. The same slogan is written on the backs of the employees’ shirts.

“Hooker” is actually the last name of the family who owns the place. Still, the double-decker Stockyards outdoor patio restaurant is just following in a long tradition of eateries with suggestive names: Velvet Taco, Fuzzy’s Taco, Twin Peaks, Hooters, and, my personal favorite, the recently shuttered male-equivalent of a breastaurant, Peckers.

Intentionally or not, the name evokes the area’s Wild West history, too. Surely actual prostitutes roamed the Stockyards back in the days when Bonnie and Clyde were wreaking havoc on our then-nascent little burgh. The area of downtown known as Hell’s Half-Acre has embraced its seedy past to the delight of tourists, so Hooker’s is just doing the same in a crowded burger field down in that part of town. The Stockyards already has Love Shack, Chuyito’s, Star Café, and countless other burger outposts.

The joint looks like someone built a cool two-story clubhouse outside a tiny ramshackle shotgun shack. There’s nothing fancy about the vibe: Corrugated steal panels hang on a wooden frame, a few beer signs are situated on the barn tin for that roadhouse effect, and there’s enough gravel around to fill a quarry. But despite its minimalist atmosphere, the playful, cheery staff kept the mood light and fun.

The menu is standard burger fare with a few extras like a bologna sandwich, ham sandwich, hot dogs, and grilled cheese. There’s beer and wine on offer, and I could see both levels of the Hooker’s patio turning into quite the party hub on weekends. It’s that kind of place.

The service was a little slow when I was there at the height of the lunch hour, and the walk-up window became cluttered as people milled around waiting for their name to be called and orders to be handed off. The month-old burger shack has two windows for orders, though only one was employed that day. The staff might be well served to use one for taking orders and the other for doling them out.

My guest and I waited a while for our burgers and fries, but the end result was well worth the 10 minutes in the shade. The burgers aren’t the same level of haute cuisine that you’d get at, say, Fred’s Texas Café or even Chop House Burger. But, for $5.25, you’re not going to do much better. The double-meat burger ($6.25) leveled-up to deluxe (50-cents extra for lettuce and tomatoes) with cheese (another 50 cents) is still an excellent value. The meat looked like something you’d make at home – shapeless and falling apart, it was still fresh tasting and juicy. My order of large fries ($4) was crispy, plentiful, and well seasoned.

If a place like Love Shack can thrive in the Stockyards, then there’s no reason Hooker’s Grill can’t grab its share of the burger-hungry masses. I mean, who has time for Love when you can just go grab some Hooker’s?