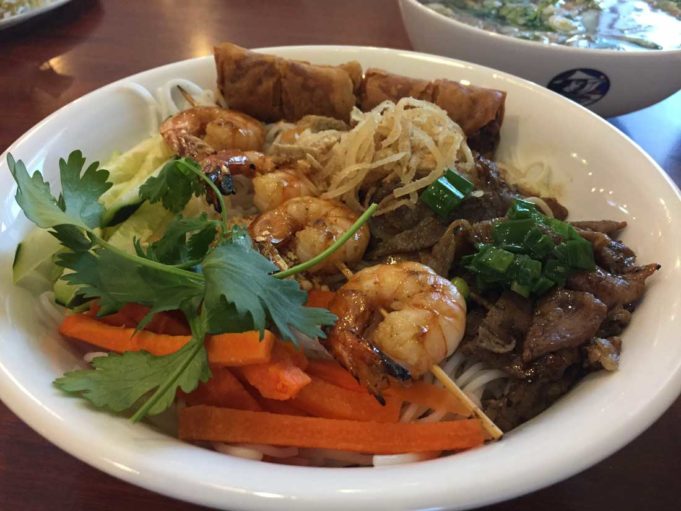 You can spot an authentic Asian eatery by its predictable quirks: 1.) The menu is longer than an old Russian novel, with terrible pictures that look as if they were taken by a toddler with Fisher-Price’s Li’lest Camera. The menu descriptions are in two languages and noun-heavy. 2.) The décor is the result of a cursory attempt to decorate with a vague “Asian” theme. And fish. If there isn’t a fish tank in the dining room, run. And 3.) There is both a television and music blaring at the same time, creating the kind of painful cacophony that might cause your average occidental to confess to a crime he didn’t commit. If you happen upon such a place, eat there. Suffer its quirks, because the food will very likely be amazing.

At Pho Hung Restaurant (6399 Camp Bowie Blvd, 817-887-9808), the second storefront of the Haltom City Vietnamese eatery, I scanned the dining room and happily checked off all of the boxes on my checklist. The fish tank is situated right up front, and the afternoon soundtrack was a combination of some woman wailing while lightly plucking a koto and Dr. Oz blaring on the boob tube.

The place is cavernous and bright with a vibe that screams “hospital cafeteria.” When I sat down in a comfy booth, the menu looked like someone laminated The Brothers Karamazov with all of the shoddy pictures and barebones descriptors I crave. I was in heaven.

As my fully marked checklist would suggest, the food at Pho Hung didn’t disappoint. The spring rolls ($3.25 for two) tasted of plump shrimp, mint, and cilantro. The accompanying peanut sauce was thick and sweet without tasting too cloying. It’s not the kind of dish you order when you want to challenge your palate, but it was refreshing and comforting nonetheless.

When I’m at a Vietnamese joint, I almost always order pho. The meaty noodle soup is my way of gauging the kitchen’s competency. But on my recent visit, I was drawn to the bún đac biet ($12.95), which loosely translates to “cold noodles with pork – house special.” The dish was crammed with sweet grilled pork, shredded pork skin, grilled shrimp, a chopped up egg roll, bean sprouts, mint, chopped lettuce, and peanuts, all served over “special” gossamer-thin vermicelli noodles and accompanied by a bowl of clear fish sauce that added a layer subtle sweetness that tied together the classic preparation.

My guest couldn’t be lured by the menu’s non-pho offerings and opted for a soothing bowl of ph hùng đac biet ($9.95 for a large – a small is $9.45), a pool of rich broth overflowing with eye round steak, lean and fatty brisket, soft tendon, and honeycomb tripe, all served with the traditional accoutrements: basil, jalapeños, bean sprouts, and lime.

If you’re looking for a quick, inexpensive lunch, the lemongrass beef bánh mì ($4.50) is a small sandwich of beautifully tender beef and slivers of cucumber and carrots all stuffed into a toasted baguette. It may be a no-frills sandwich, but there was elegance in its simplicity.

At Pho Hung, you won’t find the chef-y flourishes of high-end places like Pho District but you don’t have to pay those kinds of prices, either. After all, the most essential bullet-point on your authenticity checklist is bhang for bhuck.