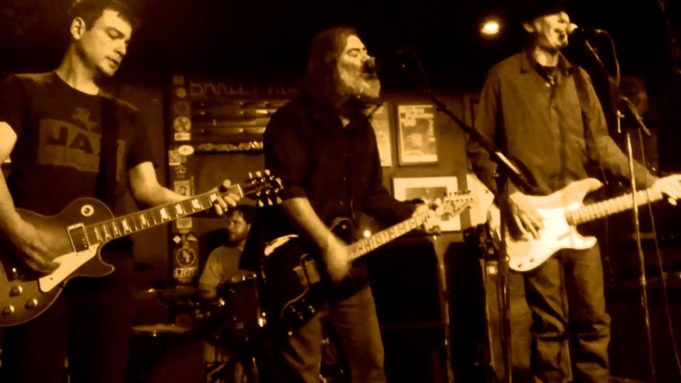 1) Thursday at MASS, chill out with ambient explorations courtesy Tidals, Atop, and Breaking Light. These bands features samplers, loopers, FX pedals, bleeps and bloops, feedback sculpting, and synthetic beats. Cover is $5, and the show starts at 9pm.

3) Saturday night, Denton-based Americana/rock band Slobberbone plays at MASS (1002 S Main). If you’re looking for a for-real, North Texas rock ’n roll party, this is the show to go to, because Slobberbone never disappoints. Just gonna throw this out there: Hey Stephen King, if you’re not busy and feel like flying into DFW on Saturday to see one of your favorite bands, I bet you can get into this show for free! I’ll make sure you’re on the list!

Slobberbone played at Fred’s four years ago and here is proof:

4) Also on Saturday: Big Mike and Friends perform the songs of George Harrison at the 81 Club, just outside Billy Bobs (2520 Rodeo Plaza). Each of the album’s four sides is led by a different dude: Paul Averitt sings side one, Big Mike takes side two, Chris Holt covers side three, and Chad Stockslager bats cleanup.

This isn’t my favorite George Harrison song, but it’s my favorite one featured in a movie about time traveling dwarves and their role in the struggle between good and evil:

5) I’d be remiss if I didn’t mention the 2017 Fort Worth Weekly Music Awards Festival, during which 40 bands and solo artists will perform across two days and eight venues. I’m just gonna list and hyperlink them; print media is not dead yet, and there are these informative glossy booklets tucked into this week’s FW Weekly that gives you short descriptions about each act that’s booked for the festival. These physical copies are available at just about any place in town where you’d drink a beer, eat a hamburger, or buy something related to musical expression, all of which are things most people tend to do when they leave their house in the pursuit of leisure. Anyway, here they are, by day and venue and in order of headliner to opener:

Jetta in the Ghost Tree

Kevin Aldridge and the Appraisers