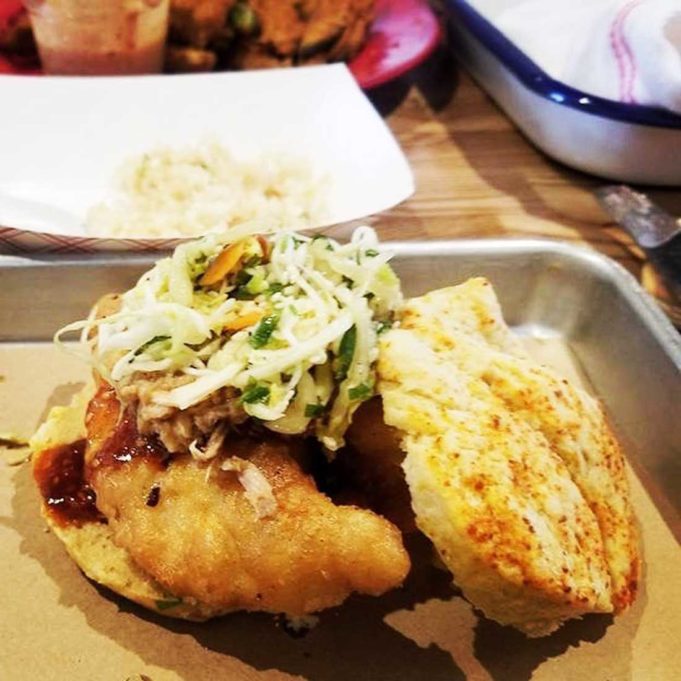 Had you told me I’d ever be sitting in the dining room of Tokyo Café (5121 Pershing Av, 817-737-8568) on a Sunday afternoon eating tiny biscuits slathered in apple-butter jam like a stoned teenager, I might have thought the standout Japanese eatery’s owners had jumped the shark. But such is the nature of pop-up restaurants. They’re like hippy jam bands that can just show up anywhere and turn the place into a party.

The Hot Box Biscuit Club, the brainchild of chefs Matthew Mobley (formerly an instructor at Le Cordon Bleu in Dallas) and Central Market’s Sarah Hooton (who also taught at Le Cordon Bleu) took over the recently reopened Camp Bowie kitchen. The chefs even themed their menu with a Japanese lilt. The bi-monthly brunch pop-up usually sets up shop at Magdalena’s Catering & Events (502 Grand Av, Ste A, 817-740-8085), which also hosts a supper club that serves three to four dinners a month. But last Sunday, the Biscuit gang was forced to find a new spot because of a scheduling conflict.

When my guest and I arrived, a man standing by the door handed us an Asian-themed Bloody Mary, with a touch of fish sauce, soy, and pickled baby corn and daikon radish garnish. I’ll say this for the Biscuiteers: They make a strong cocktail. And that was fortunate for me, because the semi-assigned seating at the sold-out event might have otherwise encouraged some awkward small talk were it not for the booze. Instead, I became more dashingly charming and loose with each sip.

After a brief intro by the two chefs, servers brought trays crammed with tiny buttermilk and scallion biscuits to every table, accompanied by a trio of spreads, including the aforementioned sweet, airy apple-butter jam. Despite the chefs’ warning for us to pace ourselves, I couldn’t cram those fluffy morsels into my greedy gullet fast enough. One of my dining companions, a veteran of several previous pop-up brunches, remarked that he’d done the same thing his first time and couldn’t eat dessert as a result. Enough said.

The next course was a shared plate of “Bomb Fried Okra,” prepared sans cornmeal and served with what the kitchen calls a Four Horseman sauce: a mélange of housemade ranch, barbecue, honey mustard, and hot wing sauces. When okra, a benchmark of Southern cuisine, is cooked well, the slime factor is offset by a touch of acid or creamy tones. The Hot Box Biscuits’ version might be the best I’ve had. Each bite was a crispy flavor explosion, and the sauce added a piquant balance.

For the main course, an intensely crunchy Korean-fried chicken breast sat atop a biscuit of togarashi (Japanese chile pepper) with Asian slaw and a healthy dose of gochujang (a savory/sweet red chile paste made with fermented soy). It was the culinary equivalent of a Southern grandmother and a Japanese chef having an obese lovechild: decadent, spicy, buttery, and amazing.

In case there was any chance of me being productive for the rest of the day, a duo of sides assured that I’d be spending my afternoon in a drooling stupor. The gluttonous pairing of chicken fried rice (rice cooked in chicken fat) and corn stewed in miso and cured bacon –– a little gem called “Miso Corny with Notorious P.I.G.” –– were served family style and devoured without dignity.

By the time the peach fried pie with a scoop of ice cream and smear of caramel hit the table, I was ready to levitate. Luckily I was weighted down by all of those biscuits.

The Bisc-ites hope to have a brick-and-mortar location soon, but you can sign up for an email through their various social media outlets to find out where they’ll be popping up next.