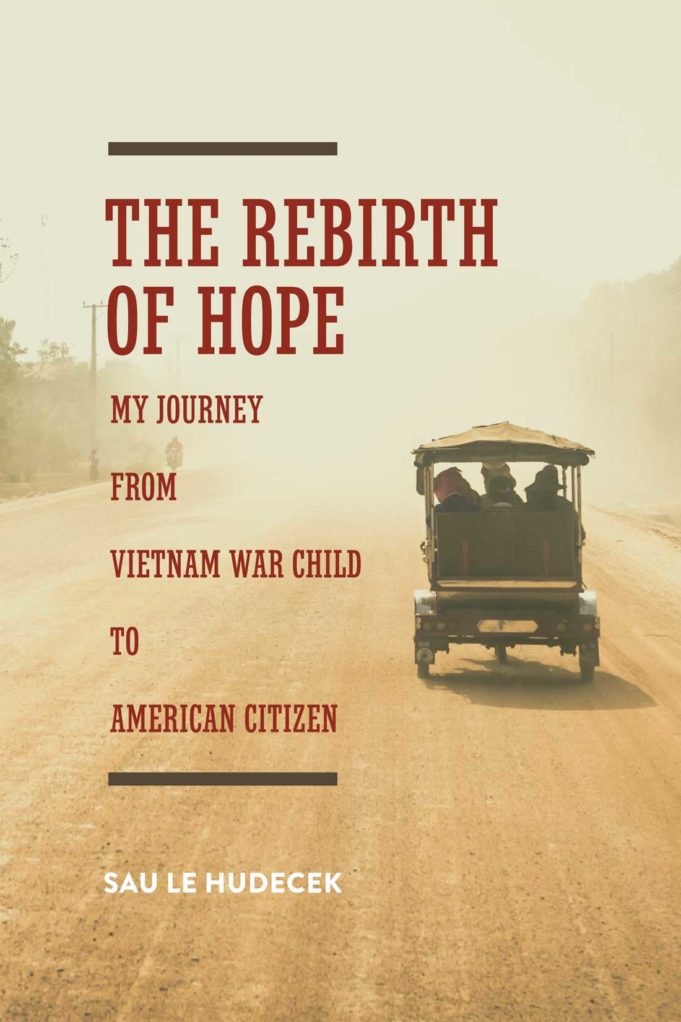 Few know that the owner of Jerrel James Salon came to America with only $20 in her pocket. With the recent publication of The Rebirth of Hope: My Journey from Vietnam War Child to American Citizen, we’re learning more details on the hardships faced by Sau Le Hudecek, a local businesswoman who found success as an American citizen.

Until Vietnamerica, not many other books have afforded us glimpses into the lives of Vietnamese-born immigrants. The third wave of Vietnamese immigration to the United States began in the late 1980s and ended in the early 1990s, making this group one of the largest foreign-born populations currently residing in the country. Le Heducek’s writing reveals just how bootstrapping a Vietnamese American had to be in 1993 and, before that, how cautious she had to be as an Amerasian under communist reign in North Vietnam.

The first few chapters are a plod through a swamp of childhood heartaches and fears of a young girl growing up in Vietnam. As the daughter of a Vietnamese widow and an African-American soldier, Le Hudecek became a target for friends and family to torment, shame, and sometimes physically abuse. Despite her academic aptitude and her work ethic, her darker skin tone made her an enemy to the Viet Cong, who ruled her homeland with terror and death threats to children born of American soldiers. As a young woman, she expected her appearance would help her avoid the Vietnamese “marriage mart,” but a wealthy, much older suitor knocked on her mother’s door. The arranged nuptials were the only way her mother could redeem favorable social standing in Quang Tri society, so Le Hudecek suffered one more unfairly inflicted fate until The American Homecoming Act of 1987 took effect the following year. For the first time, the author used her American nationality as leverage to leave a torturous past.

With her mother, husband, and now an infant son in tow, Le Hudecek endured a seemingly endless layover in the Philippines — six weeks to be exact — before members of Travis Avenue Baptist Church sponsored the costs of her family’s trip to Fort Worth. Intercultural barriers abounded. Le Hudecek recalls worrying over pressing issues, such as whether the $20 in her billfold would last long, and some less pressing issues, such as finding a casserole dish of mac ’n’ cheese waiting for her in the refrigerator of her new home on McCart Avenue. (She was quick to learn the American tendency to drown food in dairy products.) As her acclimation to American customs intensified, she learned a lot about the English language and how to shave her legs and,  eventually, the expense of serving a no-good husband divorce papers.

Just as Le Hudecek’s first husband faded slowly into her past, she couldn’t escape misfortune, including the loss of an ovary, Chapter 7 Bankruptcy, and a convict posing as her father. Yet somehow her spirit never deteriorated. On her first try, the author passed the state licensing exam to practice cosmetology, and from there she found the rest of her life falling into a much more comfortable place. She shares a few more afflictions in the later chapters, but from this point on the story turns toward one of personal reconciliation with the difficulties life dealt her.

Written entirely in first-person, Le Hudecek’s voice does well to hoist the narrative over hills of conflict and resolution. Most readers will be impressed by this long series of tribulations that hardly sounds fabricated, but I imagine some Vietnam War buffs will casually pick up this copy and expect more creative non-fictionalizing. On the other side of the library, though, there will be lectors who see Le Hudecek’s writing like the Gospel word: foundational and inspirational. Bearing in mind that English is not Le Hudecek’s first language, the occasional poetry of her reflections embossed parts of her story in my memory. I appreciate that the editors at TCU Press didn’t efface Le Hudecek’s uniquely Amerasian tone or syntactical style.

The Rebirth of Hope undresses the tightly veiled struggle of Vietnamese-American immigrants by carefully contextualizing the stories of one local woman in a way we have barely seen on a national stage.

The Rebirth of Hope: My Journey from Vietnam War Child to American Citizen’ By Sau Le Hudecek