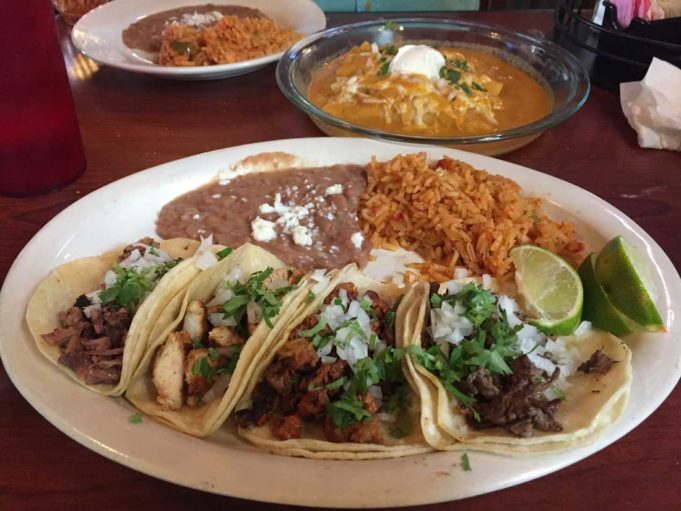 I can count on three fingers the number of Mexican joints that charge for chips and salsa (at least the ones I’m aware of): Benito’s Mexican Cuisine on West Magnolia Avenue, Amy’s Restaurant on the North Side, and, now, Tacos Del Norte (300 Central Av, 682-707-7401). The Northside eatery is the renamed/revamped version of owner Martin Cardona’s recently shuttered Papa’s Smokehouse.

It’s every Texan’s birthright to fill up on free chips and salsa, so I’m going to have to reach out to the high council of Tex-Mex on this one. I’m not sure this kind of renegade behavior is allowed!

For what it’s worth ($1.99), the salsa was a delicious mélange of chunky, roasted, smoked vegetables: onions, tomatoes, jalapeños, and chiles. Kidding aside, I’m not sure why more places don’t charge for the ubiquitous appetizer – although I’m grateful they don’t. That would just be chaos.

Cardona loses originality points on the name of his rebranded eatery – there’s already a well-known Tacos Del Norte, in Godley. But since the name translates roughly to “northern tacos,” maybe he gets a pass. You can’t copyright a cardinal direction, right?

The space still looks identical to Papa’s. The décor is the same corrugated metal, treated wood, and vaguely Texan bric-a-brac. On my recent visits, two televisions and the radio were simultaneously blaring different programming, creating a nightmarish cacophony of sports highlights, daytime drama, and Tejano music.

The menu at Del Norte is mostly new. At least Cardona kept the extravagantly delicious Papa’s Burger ($12.49), a 3/4-pound beef patty topped with a gooey cheese enchilada. But the new bill of fare is mostly tacos, Tex-Mex, and Mex-Mex classics – though the smoker sitting on the patio is still put to good use.

Of the signature tacos, the standout was the duck ($3.99), a thoughtfully designed combination of tender smoked breast topped with mushrooms and spinach, served in a hot corn tortilla. The dish hit all the right flavor notes and textures, and it tasted as refined as any haute Mexican joint that charges three times as much. Not so successful was the Baja shrimp taco ($3.99). Though expertly dusted with piquant red powders, the shrimp were overcooked and rubbery, and tasted like they’d spent time in a freezer.

The kitchen at Papa’s did enchiladas as well as anyone in town, and the new name hasn’t changed that tasty tradition. The Enchiladas Suisas ($8.49), three chicken-stuffed corn tortillas, were served in a clear bowl, so the entire dining room had a 360-degree view of the oozing hillock of cheese, sour cream, and fiery red sauce that topped the morsels. The accompanying rice and beans both represented varsity-level Mexican cuisine. The rice tasted as though it had been simmered in Rotel-style tomatoes, which added a layer of comforting umami.

There were hits and misses on the street taco plate ($9.49 for four tacos, rice, and beans). My biggest complaint was they were all served lukewarm-to-cold. Were they served hot off the grill, I bet I would have liked the oily asada and the mildly sweet, gamy pastor. The temperature didn’t make any difference for the brisket and chicken tacos. Both were tender and divinely smoky. All of the tacos were served with chopped white onions, parsley, and watery green salsa that tasted of sweet tomatillos. A better topping was the salsa. You know, if you want to splurge.