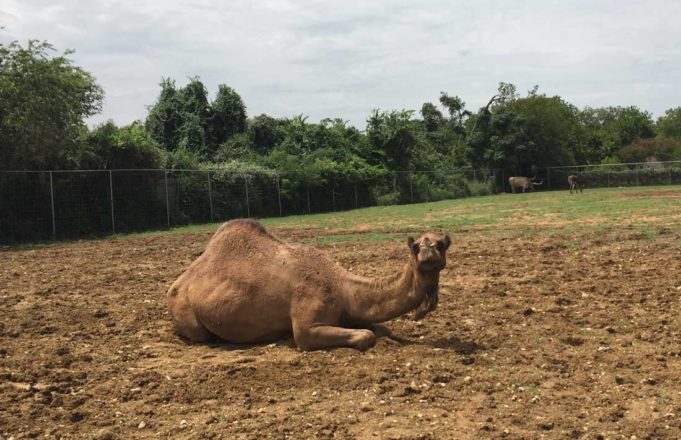 Is the sign suggesting that my dream was to fill up my tank with gas? Because, sure, as terrible a dream as that would be, Fuel City’s amply spaced station could make that happen in a cinch. But what if I dreamed of a centaur who sings opera and shits bacon-flavored ice cream? Fuel City can’t help me there.

Maybe the sign’s meaning is more abstract, like the American Dream. It still falls short in that department. No one dreams of a pulling themselves up by their bootstraps and creating their own future of a picket fence, a couple of kids, and reasonably priced gas and tacos. Well, I constantly dream of tacos, but that’s also the closest thing to a sex dream my middle-aged mind can conjure anymore.

So, sorry, vague and kind-of-misleading sign, you can’t help me realize my dreams, literal or abstract. But I did enjoy some decent tacos and gawked at a freakin’ camel. Yeah, a camel and some buffalo, zebra, and longhorns are all penned up next to the place’s car wash. The menagerie looked sad behind those wire fences. Or maybe my bleeding heart just wanted them to be unhappy. They’re probably just dumb animals that have never experienced any emotion more nuanced than “What’s for dinner?” Although I found it especially cruel that inside the taqueria/convenient store/gift shop, a couple of taxidermied buffalo heads hung on the wall.

Fuel City is bizarre. It’s a truck stop on a freeway that is about a mile out of town. I questioned its sincerity before my visit, and now that I’ve been, I think it’s little more than a gimmicky port of call for people who want all of the street cred of eating at a truck stop but none of the botulism.

I’ve had a long up-and-down relationship with gas station food. There are some legitimately great restaurants housed inside of such places. Chef Point (5901 Watauga Rd) is legendary for its haute Euro fare served among the pumps. But that’s the exception. Most gas station eateries are good for being at a gas station and offer nothing you’d go out of your way to eat again. But, people (read: hipsters) who watch too much Diners, Drive-ins, and Dives are all looking for the next culinary find set in a Conoco.

Bronze statues of steers, horned frog benches, and palm trees greet taco-hungry “travelers” outside Fuel City’s massive stone building. The interior looks like every other truck stop in Texas, with the aforementioned animal heads, corrugated sheet metal, and gift shop knick-knacks, like a lamp with two revolvers as the base and a giant “Texas-Sized” coffee mug that could double as an aquarium.

Aside from having a lighted sign, Fuel City’s service window isn’t all that prominent. The tacos ($1.62 each) were pretty good. They weren’t life changing, but the pastor was spicy and chalky with fresh seasoning, the barbacoa was just the right amount of oily and tender, and the fajita chicken with grilled onion was juicy and nicely charred. Each taco was served in double-plied corn tortillas and with a runny, piquant green salsa and a red salsa that I didn’t try. There isn’t a dining room, just a wooden plank by the wall with six nailed-down stools. I had to muscle a family of four out of the way just to sit.

The fried pies might have been the best thing I put in my mouth on that visit. The peach and cherry ($3.25) were fresh-tasting, hot, and gooey – that’s the stuff of my dreams.