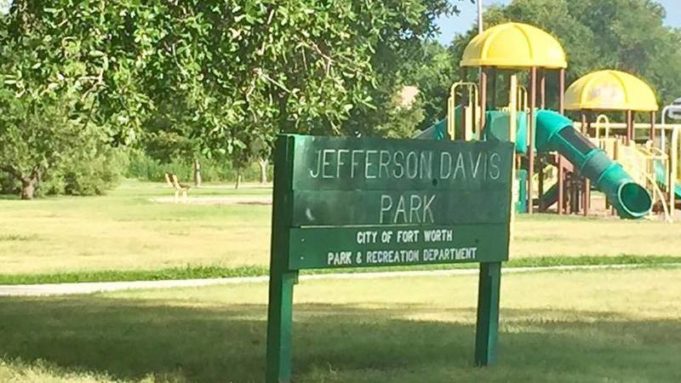 Already 2,574 people are supporting an effort to change the name of a Fort Worth park named after Confederate President Jefferson Davis.

Their virtual signatures, from Fort Worth and beyond, make up just more than half of the goal of a Change.org petition created yesterday by local resident Emily Farris, who hopes to present the 5,000 signatures to Mayor Betsy Price ultimately.

The 6.5-acre park was purchased in 1923, Farris writes, “at the height of the Ku Klux Klan revival in Fort Worth. The park, and many other memorials and monuments across the country, were part of a revisionary myth of the Lost Cause of the Confederacy and an effort to preserve white supremacy.”

Farris goes on to say that considering Fort Worth’s overall cultural diversity, and especially the diversity of the surrounding neighborhood, the park should be given “a more appropriate name,” arrived at with community input.

“In light of the horrific events in Charlottesville, VA,” Farris writes, “now is the time.”

Some signatories have explained their reasons in the comments petition’s section.

Fort Worth’s Celeste Hopkins writes, “All symbols of intimidation, racism, and terror must be removed.”

And Houston’s Delilah Rodriguez adds “Our country shouldn’t praise the actions of people who have supported white supremacy.”