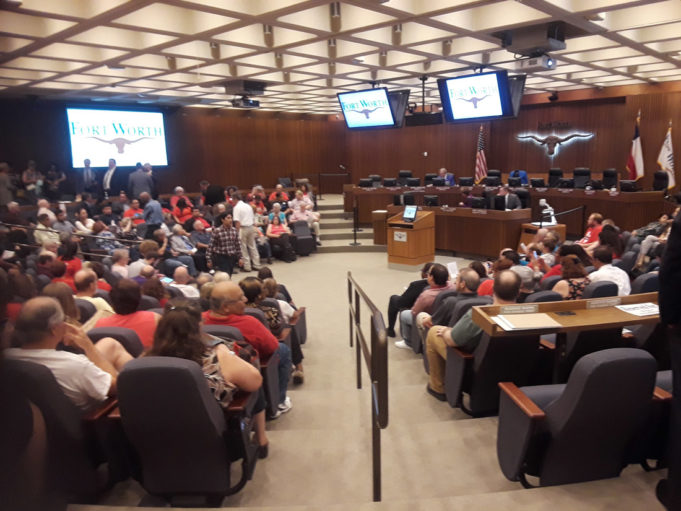 A new anti-discrimination coalition is reevaluating its next move. Just two weeks ago, United Fort Worth organized more than 400 marchers to send a message to City Hall that Senate Bill 4, the so-called “sanctuary cities” bill, encourages racial profiling.

The legislation, which passed in the 2017 regular session and goes into effect Sept. 1, allows peace officers to question the immigration status of a person they legally detain. The law includes harsh penalties for jurisdictions that don’t comply and elected officials who speak out against or violate the bill. Proponents of the law say it will aid police officers in apprehending undocumented criminals.

After SB 4’s passage, a two-front legal battle over its fate ensued. One lawsuit, filed by State Attorney General Ken Paxton shortly after the bill was signed in May, sought to preemptively rule SB 4 constitutional. That effort was dismissed last Wednesday by U.S. District Judge Sam Sparks. A second lawsuit, currently in San Antonio federal court and filed by the League of United Latin American Citizens (LULAC), which represents several Texas cities, argues that the soon-to-be law violates several provisions of the U.S. Constitution. LULAC National Executive Director Brent Wilkes said in a phone interview that his group expects a ruling on whether an injunction (a temporary delay in SB 4’s implementation) will be granted soon.

Fort Worth is the largest Texas city that hasn’t joined the lawsuit. United Fort Worth members say that needs to change.

Many community leaders have spoken out against the bill, including Fort Worth school district trustee Jacinto Ramos, who voiced his concerns regarding SB 4 at an April 1 downtown march.

“I come to you as a son of Fort Worth, a son of Mexican heritage who inherited the American Dream,” he said. “The passage of SB 4 reflects a sickness and racism at the heart of our politics.”

But Fort Worth City Council remains divided. Councilmembers Gyna Bivens, Carlos Flores, Kelly Gray, and Ann Zadeh have voiced support for joining the lawsuit. Mayor Betsy Price and the remaining four councilmembers have not, meaning Fort Worth is unlikely to join the four largest Texas cities anytime soon. Price has stated on several occasions that Fort Worth “follows the law.”

During an April 1 city council meeting, United Fort Worth volunteer Mindia Whittier asked the councilmembers to vote publicly on whether Fort Worth should join Austin, Dallas, Houston, and San Antonio in the ongoing lawsuit.

“We want [city council] to vote in a public forum as opposed to a private executive session,” Whittier said. “We feel like this is an important public issue. There needs to be transparency. If there is a public record on what their stated positions are, we as voting citizens can have that as part of our arsenal of knowledge.”

The request was granted. A public vote to join the lawsuit against SB 4 was on the August 15 city council agenda.

LULAC’s Wilkes said Fort Worth City Council “sticks out” among major Texas cities on the SB 4 debate, which has garnered national and international media attention.

SB 4 doesn’t uphold traditional conservative values, he said, alluding to the Republican majority that authored and voted for SB 4.

Wilkes said he is “hopeful” that his nonprofit will prevail in the lawsuit. In the event SB 4 becomes law in the Lone Star State, Wilkes said his group is prepared to oversee an economic boycott. “We will focus on convincing corporations, associations, and conferences not to go to Texas,” he said. “Already, The National Hispanic Bar Association has canceled a conference that was going to take place in Texas. We think the bill by itself and without a boycott will be economically painful, but if we can’t stop the bill in courts, you’re going to see the efforts to boycott really pick up steam.”

The Reform Immigration for Texas Alliance, an El Paso civil rights group, recently estimated that the state could lose $5 billion in gross domestic product and an estimated $223 million in taxes if SB 4 goes into effect.

“At a local level, we’re very engaged with” United Fort Worth, Wilkes said.

The controversial bill maintains support among many, though, including its coauthor, State Sen. Konni Burton. In a public statement, she said sanctuary city policies “undermine the enforcement of our federal immigration laws and unnecessarily risk the safety of our local communities.”

Burton went on to lament “misinformation” surrounding the bill.

“I absolutely respect the Fort Worth City Council debating this proposal,” she continued. “I would encourage the members of the council who share my support of SB 4 to stand firm and know that as your state senator representing much of Fort Worth, I am with you.”

The August 15 city council meeting drew many speakers for and against joining the lawsuit and went on for hours (much past our press time). United Fort Worth members had been encouraging volunteers to speak at the meeting. Project Fort Worth, a community organization that hosts guest lecturers, recently sent an email blast to its members with a different message. Project Fort Worth called on them to testify at the meeting and to contact “city councilmembers via phone or email and ask them to vote against the lawsuit.”

Fort Worth lacks a strong track record of sustaining large grassroots movements like United Fort Worth, Whittier said. A major aim of the new group is to remain organized after the SB 4 lawsuit concludes.

“The vision of [United Fort Worth] is to create more engaged citizens here in Fort Worth,” she said.

Update: Voting 5-4, Fort Worth City Council and the mayor elected to not join the lawsuit against SB 4. The vote came after four hours of discussion. The so-called “sanctuary cities” bill goes into effect Sept. 1.