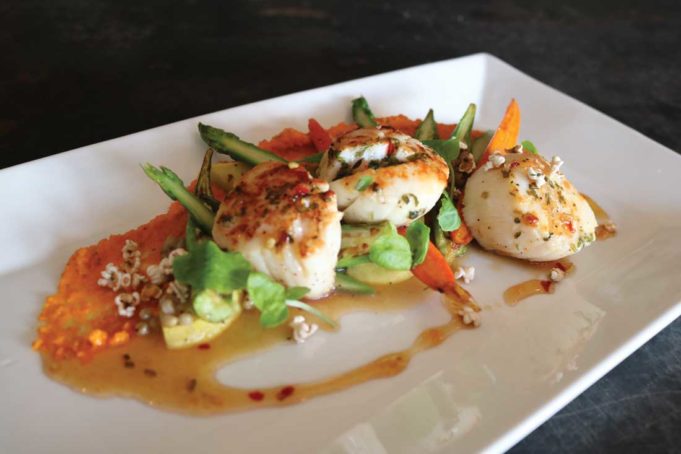 In my capacity as a professional diner, I’ve lost count of how many eateries rely on thoughtless décor and blare TV sports – just throw up some animal heads and a few neon beer signs, crank up SportsCenter, and call it done. A restaurant’s ambience should be just as much a part of its story as the menu and service.

Without question, the best ambience I’ve encountered all year has been at 44 Bootlegger (1411 W Magnolia Av, 817-887-9089) – the food was pretty darn great, too. In fact, it was one of the most complete dining experiences I’ve had in this town in a while.

Bootlegger is hard to see from its position, recessed in a modest strip mall on West Magnolia Avenue. The (maybe only) advantage of its being one of the few buildings on that trendy boulevard that isn’t pushed up to the street is that the one-time retailer-turned wine bar has its own parking out front.

Inside, the tiny café exudes sophisticated, rustic charm, with impressive-looking antique doors lining the walls, a canoe hanging from the ceiling –– a relic from its days as a retailer –– and, yes, a few animal heads just to remind diners we’re still in Texas. A classical guitarist plucked away quietly in a corner, just loud enough to fill the space without drowning out conversation.

The team of servers was warm and amiable as my guests filed in before becoming a picture of ghostlike unobtrusiveness throughout the evening – available when we needed something, knowledgeable when we had questions, and always with an air of friendly familiarity.

Mine was a large party, so I’ll just hit the highlights on food: Chef Jaime Fernandez’s rotating menu of classic French cuisine with a Spanish twist was small but mighty. The offerings included a few appetizers, salads, about half a dozen outstanding small plates, and just a few entrées.

The charcuterie plate ($17) was crammed with so many delectable cheeses, fruits, housemade spreads, and thinly sliced meats, I’d need the whole column space just to name them all. So I’ll just say it was a wonderful mix, and the pork rillette, a pâté-like spread, is alone worth the trip.

If you like your eggs deviled, Bootlegger’s version ($5) was creamy and well seasoned, and it evoked feelings of both comfort and luxury. The pomme frites ($5) were beautifully crisp and accompanied by a silken housemade mayo.

My entrée of steak tartare ($18), raw beef topped with an uncooked quail egg, was the stuff of drool-drenched daydreams, served with the aforementioned frites and a modest salad of bib lettuce slathered in a vinaigrette. The plump seared scallops ($21) were beautifully caramelized on one side and served alongside tender potatoes that looked like smaller versions of the mollusks.

Still, maybe the best taste in the dining room was my first: the ambience. I’m glad the food lived up to the décor.