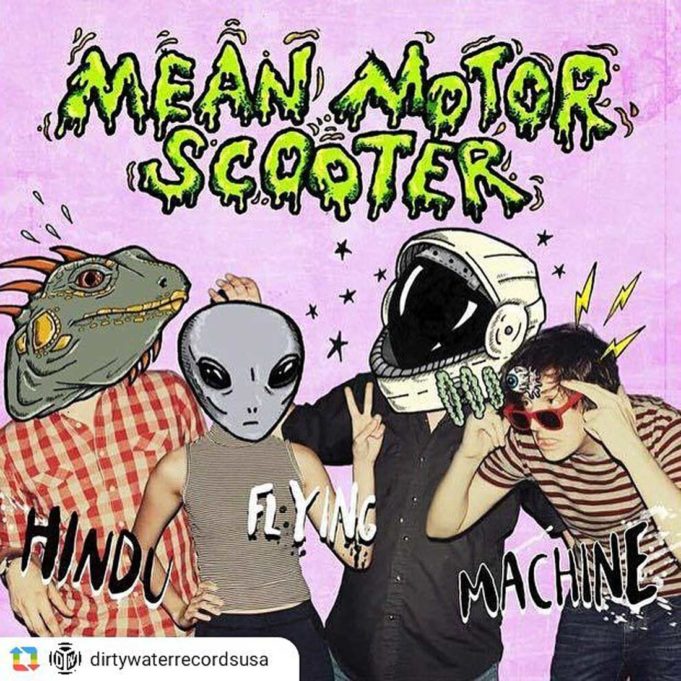 I have the feeling that history will judge this strange year with a mixture of punch-drunk confusion, odd fascination, and abject horror. But when the members of Mean Motor Scooter look back on 2017, the psych-tinged garage rock band may well see this as the year it all came together.

Born out of a musical left turn from a mostly acoustic-rock outfit called Endless Sky, drummer Jeff Friedman, singer-guitarist and principal songwriter Sammy Kidd, and bassist Joe Tacke formed Mean Motor Scooter in 2015. Initially, they developed the type of grease-under-the-nails rock ’n’ roll sound that you might expect from a band called Mean Motor Scooter. An early self-titled EP is a document of this phase.

Ever in a state of experimentation, Kidd slowly began to reshape the heavier, riff-focused guitar work of their first effort into a more open, dirty, and surf-edged chime. He also dialed back the affected macho growl he applied to his vocals, evolving them into a much more natural tongue-in-cheek sneer. The band released its Naked Brunch/Such a Seducer double-single in 2016 with this new sound. Over three years as a band, the trio had discussed expanding their lineup at several points, maybe adding a guitar player or even a second drummer. But after the early rounds of recording, Tacke recruited keyboardist Rebekah Elizabeth to fill out the sound.

“Sammy really wanted keys, and I thought of Rebekah,” Tacke said. “Once we heard her organ parts, we realized that maybe we were missing it all along.”

Elizabeth fronts the folky art rock band I Happy Am, in which Tacke and Friedman also play. At Tacke’s recommendation, she joined MMS this February. Her gritty organ-work not only rounds out MMS’s current sound but threatens to wrest the spotlight from the rest of the band. Perhaps a bigger contribution, if subtle, are the harmonies that she sparsely and tastefully applies at just the right times, highlighting some of Kidd’s better lines.

“A lot of those things, the harmonies, were her idea,” Tacke said. “She brought a lot to the table.”

With the band’s sonic direction settled, the quartet set out to finish the work begun almost a year before. The culmination is Mean Motor Scooter’s debut full-length album. Recorded at both Cloudland Recording Studios and Tacke’s own studio, One Horn, with production help from Robby Rux (The Fibs, Antirad, Year of the Bear), Hindu Flying Machine is a 10-song collection of pure go-go, danceable psyche-garage. With themes ranging from alien invasions and simian evolution to lizard people, there’s a prevailing ’60s b-reel sci-fi aesthetic. But according to Tacke, you shouldn’t let that fool you.

“On the surface, the music’s fun, and there’s these hooky melodies,” he said. “But Sammy has a great way of telling a story and puts a lot of himself in his lyrics. We want our audience to have a good time, but we also hope they walk away thinking about the stories they just heard.”

The release party for Hindu Flying Machine is Friday at MASS, and the record is officially available the next day on CD and digital formats through the band’s Bandcamp page. And in another milestone achieved this year, MMS recently signed with Dirty Water Records USA (the new stateside sister spinoff of the London-based label of the same name) to release the album on vinyl. The foursome heads out on tour with The Darts (L.A./Phoenix) and new labelmates Escobar (France) next month.

This year may seem like the beginning of the world sliding into chaos, but at least Mean Motor Scooter is having a good time while it happens.