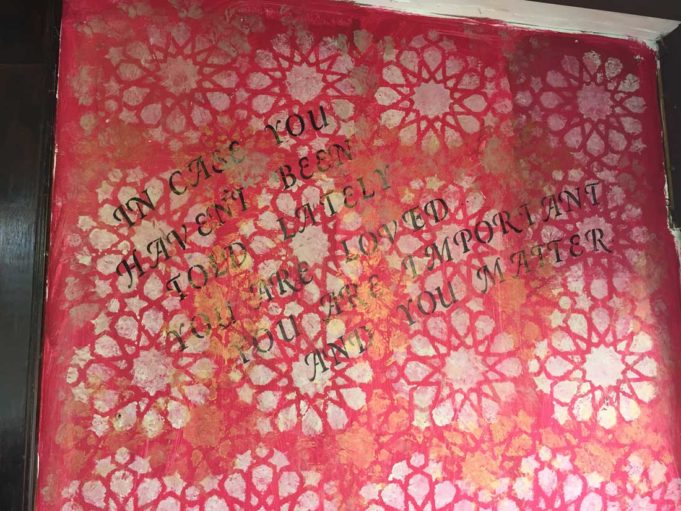 I find it funny how differently two people can view the same dining experience. I was recently struck by my lunch guest’s strong aversion to what I thought was a decent if innocuous visit to Greek Pizza & Pasta (1701 Galveston Av, 817-922-8100). Sure, the tiny ramshackle eatery tucked away across from JPS and the critically lauded Angie’s Bikkle’s Caribbean Restaurant has some quirks. But in terms of bang-for-buck, the food is hard to beat –– even my grumpy guest agreed that the kitchen does good work.

But that’s just me talkin’. You know, the one who’s been writing about food in this town for nearly a decade, who worked in fine dining for years, and who can crank out a perfect Bearnaise sauce in my sleep.

When you walk into G&P, its lack of ambience, any dining room to speak of, or ordering counter make it clear that the owners want you to take your food to-go or, even better, order it to be delivered. Still, the mismatched flood tiles, laminated wood paneling, window AC unit, and L-shaped Formica tabletop tell the story of an independently owned, low-budget place that chooses to devote its resources to the kitchen’s wares. The “dining room” isn’t completely devoid of charm: A painted message on the wall reads “In case you haven’t been told lately, you are loved, you are important, and you matter.” That’s just sweet!

The man who greeted me from behind the stainless steel counter spoke with a flat affect, vaguely European accent, and all of the enthusiasm of a guy who drew the short straw to come greet us. On his recommendation, I went for the 10-inch spinach calzone ($9.99), glistening, salted dough stuffed with a thin layer of leafy greens and a gooey mélange of ricotta, mozzarella, provolone, and parmesan cheeses. The accompanying Greek salad ($5.99) was a little on the pedestrian side, though the dish of mostly iceberg lettuce was loaded with feta cheese and a tangy Italian dressing. My guest’s cheese manicotti ($6.99 for lunch) was stuffed with ricotta and slathered in mozzarella and a fresh-tasting, well-seasoned tomato sauce.

There’s plenty to like about Greek Pizza & Pasta. It’s the kind of delivery/take-out joint everyone on the Near Southside should have on speed-dial. My guest, however, had, shall we say, stronger feelings about our visit. Below is his account.

If a building had feelings, this one would suffer from clinical depression. The faded outdoor signage, broken window, and washed-out façade seemed to scream, “We quit caring years ago.” Inside was no better. The eatery appeared to be closed. And by closed, I don’t mean that we had caught the restaurant during off hours. No, I mean closed as in no business of any sort had operated there for years. The dirty walls featured colors that didn’t match and not much else. Then again, a “Welcome” sign would be sorely out of place here. An “All Hope Is Lost” sign would be more appropriate.

We were debating whether the building was occupied when a guy suddenly appeared from behind a wall and stood looking at us without speaking. Or smiling. If the building were depressed, this dude was downright catatonic.

Chow, Baby asked what was best on the menu, the Greek fare or the pasta.

“Greek, pasta, yes,” said the only man in the world sadder than Hank Williams.

Another question –– “Does a salad come with the lunch entrée?” –– prompted a mumbled, incomprehensible, melancholy response. I wasn’t sure whether he said, “Yes, a salad is included” or “Please take a plastic knife and stab me in the jugular.”

He took our order and disappeared into what we presumed was a working kitchen somewhere back there. We sat down at a couple of chairs beside a dirty table and waited. A few minutes later, the guy who had taken our order left with a bag full of food to deliver somewhere. I nearly choked with surprise after he made a half-hearted attempt at a wan smile and told us our food would be ready soon.

I saw no kitchen and heard no kitchen sounds, but another guy appeared from nowhere after a few minutes and handed us sacks of calzone, manicotti, salad, and bread. Since the restaurant had appeared to do everything possible to make sure nobody stayed there to eat, we left with our sacks and drove back to the office. The salad, including the Greek dressing, was bland, uninspiring, and gloomy. It was like eating the building.

Finally, however, I figured out why the grub gets a good buzz on the street –– the calzone and manicotti were fresh, tasty, and terrific. If you picked up a phone and called this place and had your order delivered –– which is what most people seem to do –– you might bite into the food and envision a jolly Greek chef wearing a bright white coat and singing songs from the Old Country while creating culinary magic in a brightly lit kitchen with birds sang outside the window.

Next time, I’ll have it delivered.