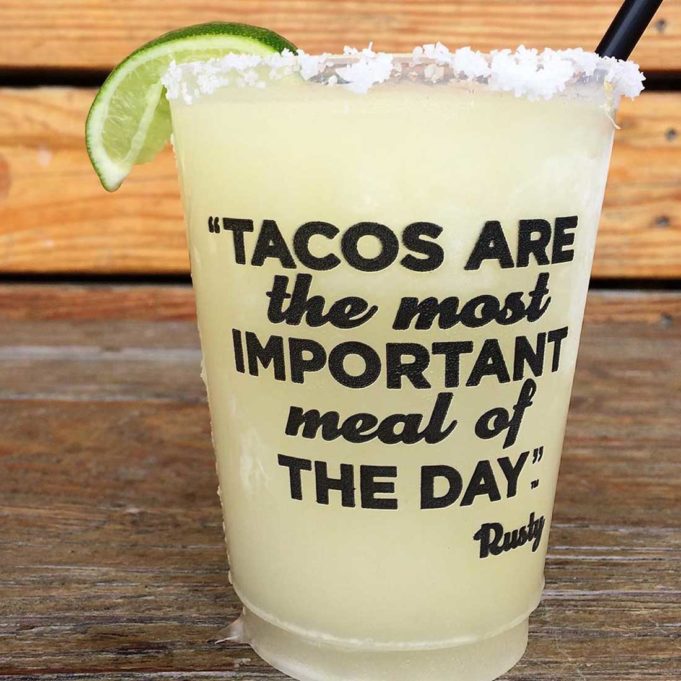 For such an allegedly tony neighborhood, there really aren’t a ton of nice restaurants in the Ridglea area. Now, if you’re looking for a $300 haircut or someone who will cover your eyes with cucumber slices while rubbing your feet, then that part of town is second to none.

I guess it makes sense that there are more chain/fast-food options than there are starched-apron joints around there. Ridglea’s main artery, Camp Bowie Boulevard, has long represented the proverbial railroad tracks, separating the rich from the poor. Of course, Ridglea Country Club and a few $500K homes sit on the wrong side of that lazy bit of metonymy, but if you’re looking for a tidy line in the sand, that’s as good as any.

These days, the once-chic locale is better suited for Dallas mini-chains like Snappy Salads, Campisi’s Restaurant, and R Taco (3206 Winthrop Av, 817-349-0850), the latter of which opened several months ago after what seemed like an agonizingly long lag time between their announcement and actually cracking a bottle of bubbles on the S.S. Taco. In their defense, the owners have been busy. That chain is metastasizing throughout the area, having now set up shop in Bluebonnet Circle, Mansfield, Hurst, and practically everywhere else there’s a Starbucks.

R, or Rusty Taco, occupies a space that has traditionally housed fancy-in-the-pants-y eateries – most recently Wild Mushroom, Ray’s Steakhouse and Seafood, and an earlier iteration of Aventino’s have all come and gone over the past decade or so.

The place has the same walk-up counter service concept as Fuzzy’s or Austin’s Torchy’s Tacos, which are probably R’s biggest competitors in the fast-casual taco chain game. R is more of a gourmand’s idea of an everyman taco, and the booze selection is made with ingredients that can be described only by using my favorite new restaurant marketing buzzword: fresh.

The décor is fairly barren. There are enough flourishes of colorful corporate-approved fun to fill the space. That said, the vibe mostly conveys a strong sense that you’re in a room with tables and chairs more than anything. It does at least tick all the boxes of successful chain restaurant décor: The suddenly ubiquitous air ducts wind through the ceiling, the kitchen is exposed, and a giant TV sits at the end of the dining room — however, a foosball table sits in front of the TV, assuring no one will play unless they want to block everyone’s view.

For some reason, it’s acceptable to charge for chips and salsa ($2) at a walk-up counter. And, although I didn’t order it on my visit, the kitchen also hooked me up with some queso. (Maybe a Halloween treat?) Both were pedestrian but decent. The salsa was on the runny side, but at least garlic and cilantro tones shined through the blend of tomato and water. The cheese was thicker, and its chunks of jalapeños stung a little on the way down.

Of the tacos I sampled, the Rusty Taco ($2.25) with its tender slivers of achiote pork, pineapple, onion, and cilantro, was the highlight. And the only one I’d take back was the Baja Shrimp Taco ($2.50). The little crustaceans tasted like they’d spent too much time in a freezer –– limp and bland. I’d also recommend the fish and fried chicken tacos ($2.50 each), though I’d add a touch of the tomatillo-heavy green salsa to both. Watch out for the fiery habanero sauce. It was criminally spicy.

The bang-for-buck ratio doesn’t compare favorably to many other local taco joints. Then again, the price point is OK for Ridglea — at least my memory of it.