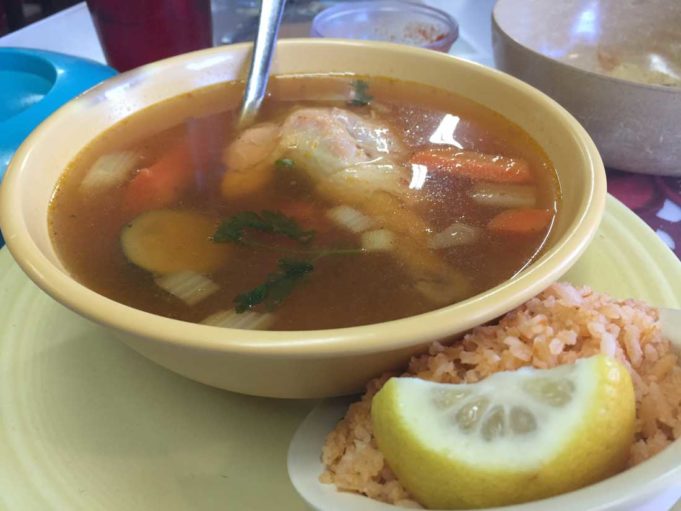 I used to get a ton of emails. I remember after snarking it up at the expense of In-N-Out Burger a few years back (“Yawn-N-Out,” Aug 24, 2011), around 80 admirers filled my inbox with loving messages about which type of animal excrement I should eat and strong opinions about my mother’s sexual promiscuity. (I do love this town’s fast food cults.)

Nowadays, most people vent on social media and/or our website’s comments section. So, whereas I used to receive 20 or 30 emails on an average week, now I’m lucky if anyone writes me at all.

But this week was different –– a bumper crop of two emails nearly broke my server: One frequent reader expressed his disappointment in last week’s mailed-in holiday recipe column (I know, I’m sorry), and the other asked me where to find the best caldo de pollo in town. On the latter subject, I am well versed.

Many authentic Mexican eateries view the chicken-vegetable soup like it’s some kind of rare treat and serve it only once or twice a week –– the same is true with pozole and menudo. I guess soups are like the guest towels of Mexican food. The owner of a Northside joint I frequent told me her kitchen makes soups so infrequently because they would throw out so much. Now that they’ve made it a special occasion, diners actually show up specifically for a hot, steaming bowl.

The line between caldo de pollo, chicken tortilla soup, and just regular ol’ chicken soup is admittedly blurry. So my criteria will be simply these: The soup cannot have tortillas or chickpeas in it and must feature some veggies and starch.

For more traditional fare, it’s hard to beat Los Zarapes Restaurant (1503 NW 25th St, 817-624-8013). If you’ve never visited the Northside institution, you should go just to check out the décor. It looks like a Catholic church moved into a flea market kiosk that sells porcelain figures and framed Mexican art, with pots, pans, and various other garage sale tchotchkes hanging from the ceiling. Its version of caldo de pollo ($8) is all about the rich, chile-infused broth. A tender leg of tender chicken shares the bowl with mirepoix veggies, green bell peppers, a whole new potato, zucchini, and Mexican rice. It’s served with fresh housemade tortillas and a piquant, jalapeño-heavy salsa verde for a tasty make-you your-own taco starter kit.

Also on the North Side, Los Paisanos Restaurante Y Taqueria (1446 N Main St, 817-625-8226) purveys a much heartier version, chock full of thigh and leg meat, cabbage, carrots, zucchini, corn on the cob, new potatoes, and rice. The kitchen sells out of the soup so quickly the few times a week they make it, I was starting to think its presence on the menu was just a ploy to attract soup-hungry gringos.

Honorable mention goes to a couple of El Salvadorian places. Doño Carmen Pupuseria (1712 N Sylvania Av, 682-647-0051) gets the nod if for no other reason than for offering one portion that could feed an entire Victorian-era British orphanage for a year (and no one will be asking for more). And, as much as I hate to waste ink on a Dallas chain, the version at Gloria’s Latin Cuisine (2600 W 7th St, Ste 175, 817-332-8800) might be the cure for the common cold, though it loses points for using breast meat.

Feel free to email some more suggestions –– or anything at all. In-N-Out still sucks, by the way.