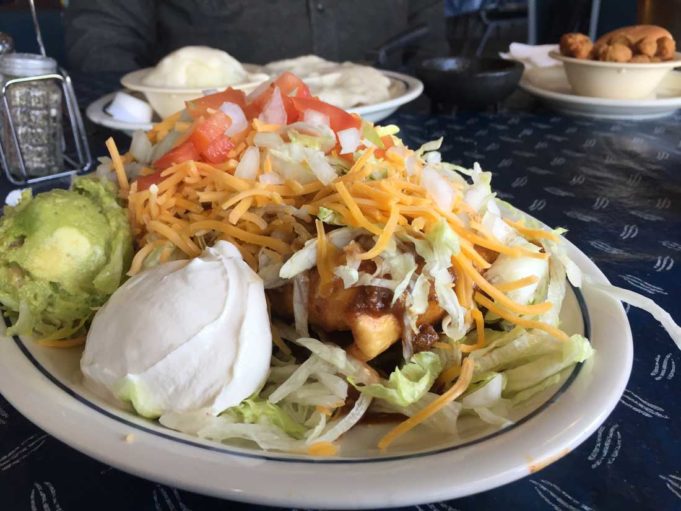 You can keep West 7th, Magnolia Avenue, Camp Bowie and every other so-called “restaurant row” in this town. For my money, Hemphill Street is the best stretch of eateries on any one swath of concrete. True, I’m an unabashed taco slut, but there’s more to tha ’Hill than just outstanding authentic Mexican eateries. Most notably, there’s Hemphill’s Restaurant (3508 Hemphill St, 817-927-1713), a gem among gems that serves, well, a lot of things.

Inside the long, narrow dining room anchored by a cozy countertop with stools, the paneled walls are painted baby blue, as are the support beams. Just for good measure, the cloths atop the 18 or so tables are also shaded Parisian blue. If you’ve ever wondered what it was like to eat inside of a blue-hued geode, this might be as close as you’ll ever come.

The vibe is homey and sincere, with a prompt, nurturing waitstaff there to help you feel at home. Gringos have apparently already caught on to the place, as the dining room was filled with a wide range of folks, from a few multi-racial construction workers to some guy who rolled up in a Porsche and talked loudly on his phone his entire lunch. Dudes in sports cars are welcome, but let’s be clear: This is a workingman’s place. The prices are beyond reasonable – lunch entrees start at $6.50 – and the food is honest, hot, and good.

On my recent visit, I openly wondered how I, a Fort Worth native and longtime resident, had missed this place? I’ve driven down the street 100 times for after-hours grease, but I guess the siren’s call of “catfish” and “lunches” wasn’t enough to draw me back at an earlier hour.

Chips and a zesty, fresh-tasting salsa arrived at my table after I sat down – a decidedly Tex-Mex touch in a Mex-Mex part of town. Though it won’t ever grace the pages of Food & Wine Magazine, the cheeseburger ($5.95) was a decent-sized sandwich with a nicely grilled meat patty tucked beneath a layer of iceberg lettuce, tomatoes, pickles, and white onions, all on a standard-issue bun. The accompanying fries were crispy and wonderful. The catfish ($6.75), under the “All-American” section of the menu, was breaded in cornmeal and served with a choice of two veggies. Both the spinach and corn came from a can, but what do you want for less than $7? The tartar sauce tasted housemade and fresh.

If you must veer off into the “All-Mexican” side of the laminated menu, you’d be remiss to leave without trying this culinary carnival of a dish, Bill Hart’s Chimichanga ($8.25). The lightly fried meat missile was stuffed with ground beef, mozzarella cheese, refried beans, and rice – not that you could see it. The heart attack on a plate was covered in strata of shredded cheddar cheese, lettuce, tomatoes, and steaming chili, with guacamole and sour cream served alongside. Just to make sure you can’t walk out, a small bowl of pinto beans taunts you as it steams. Mine were left uneaten.

I’m not suggesting you go to Hemphill and not have tacos. Just know that you don’t have to.