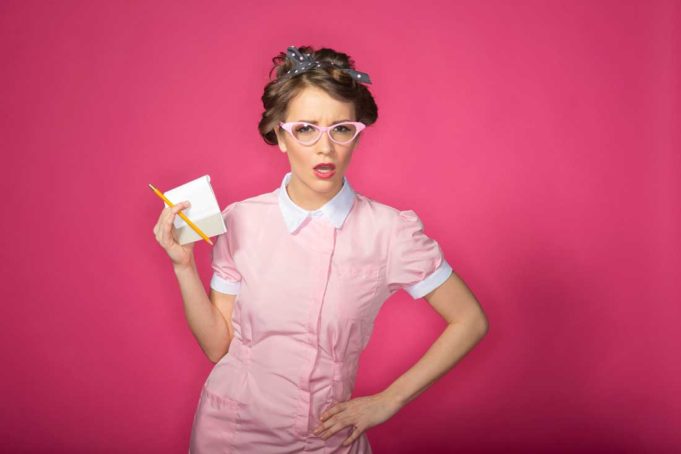 There I was at a nice West 7th eatery with a few friends enjoying our just-arrived appetizers when a food runner holding a tray stocked with our four salads arrived. He just stood waiting for us to clear space on our already crowded table, which we eventually did.

We were a little annoyed and felt rushed. However, after exchanging a few mildly incredulous glances, we soldiered on. Sure, at nice restaurants, particularly at dinner, it’s common practice to wait until everyone is done with one course, clear the table, reset it, and then bring the next plates. But, hey, what did it matter? We were enjoying the wine and company. And, forgetting that the salad was wilting away while we finished our appetizers, the food was pretty darn great. Then, just five minutes later, that same eager food runner brought our entrees.

“I don’t know where you’re going to put these,” I quipped. I could see the hamster working the wheel in his head. I had to stop him from taking our unfinished appetizers – given their lofty price, I expected him to at least offer to box them up. When our server arrived a minute or so later to check on us, I told him about our concerns. We were feeling rushed, crowded, and, maybe more importantly, like we were dining at a high-priced restaurant and being treated like the lunch crowd at a turn-and-burn greasy spoon. He didn’t seem to understand why we didn’t want all of our food at the same time and politely blamed the kitchen.

I get that there are bigger problems in the world – and much bigger problems at most restaurants. Here’s the thing: That admittedly minor issue hit everyone’s bottom line pretty hard.

A little pacing would have gone a long way. We were so turned off by the whole thing, we went elsewhere for dessert. That cost the restaurant money. I’m not saying I won’t go back to that place – it’s had way more hits than misses over the years. But I doubt I’ll visit again anytime soon, which also will cost the restaurant money. We tipped appropriately, but folks like me who worked two decades in the service industry generally tip far better than 20 percent. Couple that with the desserts, coffee, and after-dinner drinks my guests and I would have enjoyed had we stayed, and that seemingly insignificant mistake easily took up to $30 (depending on the tip-out situation) out of our server’s pocket.

Taking the pulse of your diners, getting a read on their mood and sense of urgency is apparently a lost art. I’ll give you another example:

A guest and I were having lunch at a local diner when our waitress met us at our table to take our order the moment we sat down. We hadn’t even cracked the menu, so we asked for a few minutes to look over things. After giving us a bit of light-hearted (though unwelcome) sass, she turned and walked away. She never came back. I had to go looking for her after about 10 minutes. We had to get back to work.

She followed me back to our table, doled out a little more cheeky humor, and took our order. Things went smoothly after that, though, again, I felt so annoyed and rushed, I vowed to stay away from that eatery at lunchtime.

Both of these places are small indie joints – the exact kinds of restaurants I want to like and support. In our landscape of encroaching chains, the local guys need every dollar they can get. And these little mistakes could be costing them big.