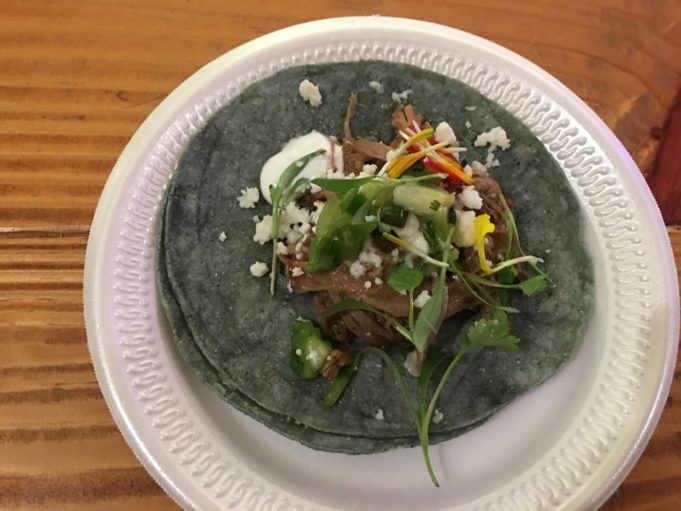 Tacos + Tequila, the Fort Worth Food and Wine Festival’s slightly raucous inaugural event for 2018, was heavy on the hard stuff and light where it should have counted most — the food.

With only seven taco proprietors splayed over two floors (plus out back) at the handsome BRIK Venue, located in a slowly gentrifying block of rail yard and seen-way-better-days shotgun homes on the city’s South Side, the vibe skewed more Dallas than Funkytown, as PYTs downed tequila shots while frenetic bloggers and food writers scrambled for good lighting in which to take iPhone pictures.

The weekend’s kickoff event, sold-out and with people swarming along the perimeter of the building well before early admission, featured an array of tequila vendors, which sought to smooth any ruffled feathers over the protracted entry process.

Tequila is not m’thing, but tacos are. Too bad the city’s best taquerias were not included in the night, which featured a curiously small group of notable restaurants, from Meso Maya to Wild Salsa to Mariposa’s Latin Kitchen. These are not names one flashes on when conjuring “Fort Worth’s Best Tacos,” but the inclusion of Salsa Limon, Godley’s Del Norte Tacos and Taco Heads aimed to pump up the puny food cred. Inexplicably, Alma’s Paleteria, a Seminary Drive ice cream shop, rounded out the field. Alma’s and Meso Maya, however, didn’t offer tacos — the former served tortas and the latter chicken mole — so much head scratching commenced.

Small though the options, there were a few standouts:

Best taco: Salsa Limon’s “tongue and cheek” creation, served on double corn tortillas which strangely looked like a couple of slices of bologna. No matter: The barbacoa was succulent, even if it was off-putting to less adventurous eaters. But eating something “out of the box” (or out of a food truck) should happen on the reg at a food festival. Topped with a large slice of avocado, shredded lettuce, salsa and crema, it hit all of the right notes.

Best not-a-taco: Meso Maya’s chicken mole, smoky and piping hot atop white rice was excellent. But what was it doing here?

Best salsa: Del Norte’s avocado serrano sauce. I would make the trip to Godley everyday (if I had a Tolltag) for this heady, sneakily spicy stuff.

Best braised meat/most attractive taco: Wild Salsa’s ancho-chile braised pork iteration was tender and nuanced, and garnished with the prettiest sprigs of cilantro you ever did see.