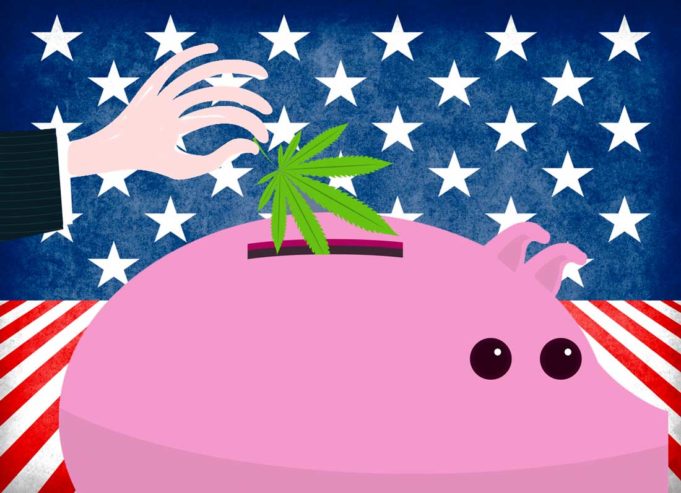 I am the grandchild of Dave O’Brien and Dorothy Short, who met as the lead roles in a smoky cult classic. Released in 1936 as a propaganda piece by the U.S. government, Reefer Madness stars my grandfather as Ralph, the drug-dealing hooligan, and my grandmother as Mary, the innocent schoolgirl seduced into jazz and the madness of addiction to the “weed with roots in hell.” Ironically, this marks the beginning of America’s national effort to ban the pot and demonize its use in all forms.

Therefore, while I don’t partake, I owe it to my pothead friends to fight back.

Let’s talk about the money we are losing. The national debt is expected to leap past $20 trillion over the next two years alone. Yet we are losing approximately $20 billion per year, according to The Huffington Post, related to marijuana, the enforcing of its laws,  and its natural value as a commodity. The American Civil Liberties Union (ACLU) says $211 million per year was spent by local governments alone on enforcement and that 750,000 people were arrested for weed violations in 2011, the last year for which data are available. That’s one arrest every 42 seconds.

Now let’s focus on the money losers if pot is legalized. This is where you can see why the effort remains to maintain current policy. Through channels we’ve created called Political Action Committees, alcohol distributors and drug cartels are paying huge sums of money to help keep marijuana illegal. However, Big Pharma would lose most bigly in this game. From a 2014 report in The Nation, Purdue Pharma and Abbott Laboratories, makers of the painkillers OxyContin and Vicodin, respectively, are among the largest contributors to the Community Anti-Drug Coalitions of America, an anti-pot nonprofit. And the Pharmaceutical Research and Manufacturers of America, a trade group that’s considered one of marijuana’s biggest opponents, spent nearly $19 million on lobbying in 2015 alone.

The losses for Big Pharma could be in the hundreds of billions of dollars if a non-addictive painkiller alternative that you could grow in your backyard were to become available to the public.

The Centers for Disease Control and Prevention (CDC) reports that opioids have accounted for more than 70,000 deaths in 2017, a total that is larger than everyone killed in the Vietnam War. More than two-thirds of those deaths were from prescription opioids. To date, there has not been a single reported overdose on Tetrahydrocannabinol (THC), the psychoactive chemical in marijuana, a fact that is freely admitted by the U.S. Drug Enforcement Agency (DEA). So the No. 1 most valued industry in the nation, worth more than $445 billion a year, according to Statistica.com, is also directly responsible for the most overdoses in America. Opioids are also the highest addiction-rate gateway to heroin, costing taxpayers billions annually to clean up Big Pharma’s mess and help them maintain record profits.

The industry spends more than $200 million per year on lobbying. That’s more than the defense industry. Big Pharma does this to be sure our Congress members not only ignore the data, and pass favorable laws that help the industry save in taxes and keep the poison pumps flowing, but also to shield Big Pharma and its pushers (the distributors) from prosecution. Congress simply ignores the easily accessible knowledge that Big Pharma has actively lied to doctors about the risk of addiction while marketing to them via armies of sales reps. According to the National Institute on Drug Abuse (NIDA), the CDC estimates that “the total ‘economic burden’ of prescription opioid misuse alone in the United States is $78.5 billion a year, including the costs of healthcare, loss of productivity, addiction treatment, and criminal justice involvement.”

Loosening restrictions on pot may reduce the crushing costs of treatment for the over-prescription of opioids and redirect funds we are wasting on combating weed to fight the prescription drug companies. Let’s focus on the real enemy.

Who else benefits from illegality? According to the 2013 ACLU report The War on Marijuana in Black and White, blacks are four times more likely to be arrested for marijuana possession than whites. If you are a white supremacist or a neo-Nazi, you are winning. For you, these laws are destroying black families, keeping them impoverished and less educated, and that’s exactly what you want to be able to blame somebody else for why you suck. However, if you’re not an asshole and are a family values-type like I am, you would vote against costly, needless policy that disproportionately affects black families. Legalize it to help change the stats, especially for young black males, when one out of every four will be incarcerated in his lifetime.

Let’s also dispel the gateway-drug myth. While adolescent usage has real side effects that call for a ban among minors, the majority of people who use marijuana, according to NIDA, “do not go on to use other, ‘harder’ substances.” The same guy who sells heroin and angel dust may also be selling your kids weed, so if weed is legal, drug dealers will have less reason to know your kids.

Patriotism? Abraham Lincoln was known to take some hash in his pipe. Bill Clinton smoked it. And up until the ban, hemp was made into ropes and even the parachute that carried Bush Sr. safely to the ground during jump school. It also had hundreds of other uses during World War II, including as a lubricant and as thread for shoes. Now that’s American! There are benefits to vets suffering from chronic pain to PTSD who are being prescribed opioids at alarming rates, becoming addicted at alarming rates, and are killing themselves at a rate of 22 per day. American. It’s a hearty crop with huge profit potential for our farmers. Ultra-Americano! Last reason is that if you are a Creationist, then who created cannabis? None other than Jehovah-jireh, my provider.