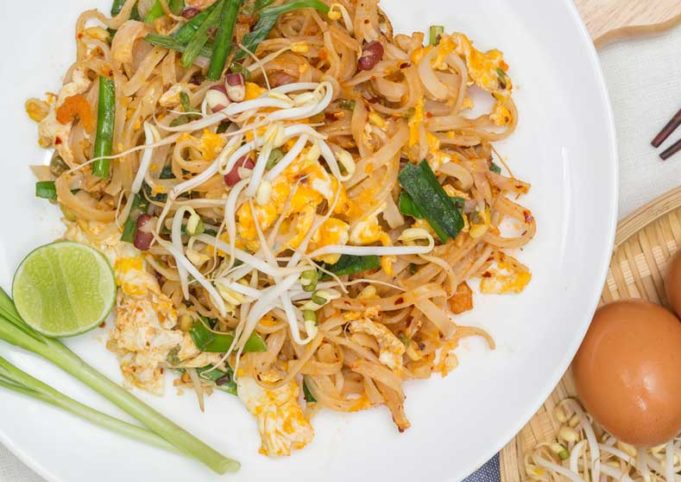 On the stretch of Belknap Street known for its Southeast Asian restaurants, Charn Thai (4125 E Belknap St, Haltom City. 817-439-9878) has opted to open just a block away from the similarly named Thai Charm. That’s confusing, but the word “charn” appears in the names of many Thai restaurants around the country, and, depending on who you ask, it can either mean someone’s name or translate as “Thai dishes,” though I’m advised that in the latter case it should probably be spelled “jarn.” Orthography issues aside, this restaurant happens to be run by Laotians, but they do a convincing and tasty enough impression of Thai food at a highly reasonable price point. The place temporarily closed a few weeks ago, but it’s back open again now.

First, a word on the beverages. The regular iced tea on the menu is actually nothing of the kind – it’s infused with the sweet-sour flavors of tamarind. If you’re looking for a new tea experience, you’re better off springing for the Thai iced tea ($3), a forbiddingly rust-colored drink that also features tamarind as well as condensed milk and spices, delivering a powerful jolt of sweet and umami flavors. This beverage isn’t for everyone, and less adventurous diners will be better off ordering a Coke, but habitual drinkers of soy lattes should definitely give this a whirl.

My appetizers were three of something called angel wings ($7.99), which I wound up wishing were as ubiquitous as buffalo wings at sports bars everywhere. After all, an enterprising bar owner might think to pull the bones out of chicken wings and stuff them with something, but who would think to stuff them with ground chicken meat, shredded carrots, and rice noodles? The tom kha goong soup ($6.95) isn’t nearly as innovative, but Charn’s mildly spiced coconut milk potage with large shrimp was quite tasty and comforting, either as a starter or in a larger size as a meal unto itself.

The crab pad Thai is prominently featured on the list of the restaurant’s specials, and you can easily see why. The dish is piled high with stir-fried rice noodles and a generous portion of crabmeat, and it’s studded with the salty goodness of ground peanuts and the roasty flavors of fried egg and tofu. For $10.99, this king-sized hillock is now pinned to my inner map of great Thai dishes in the city.

My beef pad kra tiam ($7.99) didn’t quite live up to that standard, but the fresh-tasting cilantro and onions and steady drive of the heat of black pepper made me want more. I suspect it might have gone over even better if my brain hadn’t switched off and caused me to order the plain rice instead of the coconut version.

The kitchen was sold out of roti (Indian flatbread topped with a custard of condensed milk and sugar), so by happy accident I ordered the dessert of fried banana with ice cream ($4.50) instead. I was mentally prepared for a banana-shaped confection, but what arrived at the table was a serving of four delicate French crepes rolled up and fried to a gentle crisp with the mashed banana inside, drizzled with honey and served with vanilla ice cream on the side. In this unassuming place located in a strip mall next to a Pizza Hut and decorated with the most basic Asian greasy-spoon decor, I felt very special indeed having such a refined dessert.

Fans of Thai and Vietnamese cuisines are already spoiled for choice with the restaurants in our area, but Charn Thai deserves to be sampled and savored.