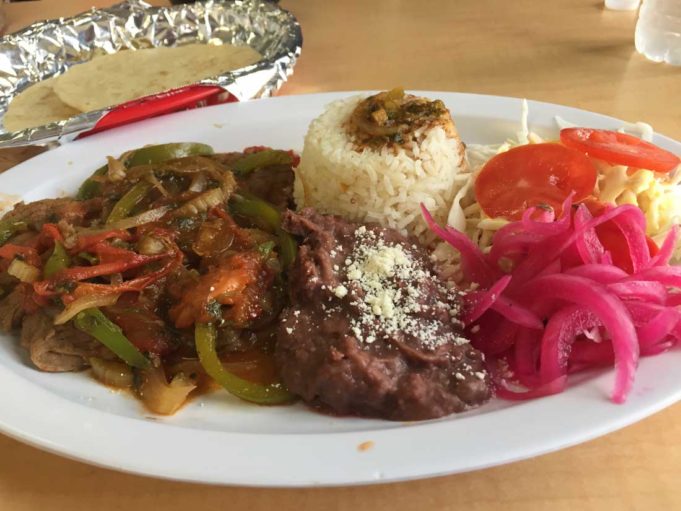 Like most people in the foodie-verse, I was hit hard by the suicide of Anthony Bourdain. Before you eye-roll so hard you fall out of your chair – or wherever you’re sitting – don’t worry. This is not going to be a hacky gush about everything Bourdain meant to me and how inspiring he was. Nor is it going to be a plea to reach out if you’re hurting. As much as I’m tempted to make the man’s untimely passing a story about me, something tells me we’ve all read too much of that already.

I chose to honor Bourdain’s memory the only way I’m qualified: I picked a neighborhood I rarely visit, and I drove around looking for something eat, locals to chat with, and an experience well outside of my comfort zone. I came across El Merendero Restaurant (300 S Fwy, 817-378-4280), a ramshackle Honduran joint on the outskirts of the Morningside neighborhood, situated on the access road of I-35.

To workaday Anglos like me, El Merendero might as well be camouflage. The blink-and-miss building isn’t near an entrance or an exit to its neighboring freeway, so you’re not likely to find it on accident. And even if you know it’s there, the place’s only identifying marker is a wind-whipped banner hanging flimsily from its patio.

Inside, the place shares the familiar tumbledown charm of many immigrant-run restaurants: TVs blaring Spanish-language music videos, about a dozen standard-issue booths and tables, bars on the windows, and friendly staffers who don’t see many pale-skin types or speak English. But if you look a little closer, there’s a lot to admire. The green-tiled floors and blue-painted walls show a little more zing than the usual dive décor of office-ceiling tile, warped linoleum, rickety tables, and botulism-covered napkin holders. Honduran flags of both nation and soccer were displayed proudly.

Though it does a brisk to-go business, I was the only person seated in the dining room – at least I was until some old white man ambled in. “Get out of my Bourdain fantasy,” I thought. Even though part of my stated mission was to chat with locals, I didn’t think he counted. And I couldn’t talk to my server, who didn’t speak any English aside from her super polite, “You OK?,” as she wobbled to my table in heels to check up on me.

My wait for food was agonizingly long, and I was fast filling up on housemade chips and complimentary beans topped with sharp queso fresco. As my lunch adventure became a little more languid than I’d hoped, I started to remember the hard-learned reality about hole-in-the-wall finds: They almost always let you down. Then my appetizer arrived, and my fears took flight.

The house specialty is the pupusa ($1.25), stuffed masa cakes that are pervasive in Latin/South America – and more synonymous with El Salvadoran cuisine. Mine, stuffed with queso blanco, was more like the humble child of a quesadilla and a calzone, toasted in the rich fat of the cheese that bubbled out while it cooked.

I felt like my order of bistec encebollado (8.99), another Latin classic of thin flank steak cooked with onions, bell peppers, and tomatoes, was a little too safe considering I was eating in honor of a man who made off-brand pig parts fashionable. But I wasn’t disappointed. The tender protein was awash in juices from the veggies, served with sauce-splashed rice, refried beans, bright purple pickled onions, and a salad of piquant pickled cabbage lightly drizzled in a spicy mayo-based dressing. On the side were housemade corn tortillas that, while excellent, were more filler than anything. I felt as though I was, to quote Bourdain, “ready to burst into an omni-directional mist.”